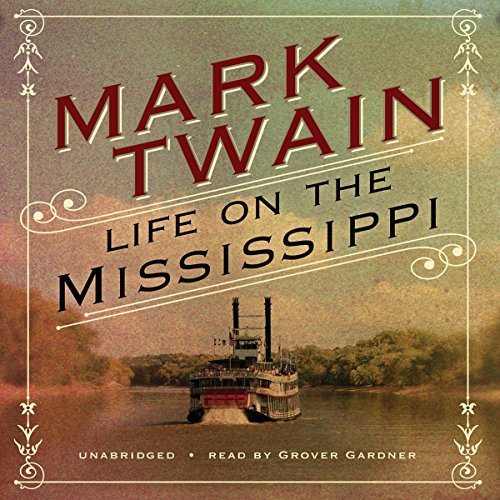 The Mississippi River, known as “America’s River” and Mark Twain are practically synonymous in American culture. The popularity of Twain’s steamboat and steamboat pilot on the ever-changing Mississippi has endured for over a century.

A brilliant amalgam of remembrance and reportage, by turns satiric, celebratory, nostalgic, and melancholy, Life on the Mississippi evokes the great river that Mark Twain knew as a boy and young man and the one he revisited as a mature and successful author. Written between the publication of his two greatest novels, Tom Sawyer and Huckleberry Finn, Twain’s rich portrait of the Mississippi marks a distinctive transition in the life of the river and the nation, from the boom years preceding the Civil War to the sober times that followed it.

Samuel Clemens became a licensed river pilot at the age of twenty-four under the apprenticeship of Horace Bixby, pilot of the Paul Jones. His name, Mark Twain, was derived from the river pilot term describing safe navigating conditions, or “mark two fathoms.” This term was shortened to “mark twain” by the leadsmen whose job it was to monitor the water’s depth and report it to the pilot.

Although Mark Twain used his childhood experiences growing up along the Mississippi in numerous works, nowhere is the river and the pilot’s life more thoroughly described than in Life on the Mississippi.

MARK TWAIN (1835–1910) was born Samuel L. Clemens in the town of Florida, Missouri. One of the most popular and influential authors our nation has ever produced, his keen wit and incisive satire earned him praise from both critics and peers. He has been called not only the greatest humorist of his age but the father of American literature.

Public Domain (P)2010 Blackstone Audio, Inc.
“Mark Twain was the first truly American writer, and all of us since are his heirs.” (William Faulkner)
“I believe that Mark Twain had a clearer vision of life…than any other American…I believe that he was the true father of our national literature, the first genuinely American artist of the royal blood.” (H. L. Mencken)

Anyone considering this Daily Deal--there are two Kindle editions available, one for a dollar and one for free. Buy the free one, add the Whispersync narration for a dollar, and you get this $5 Daily Deal for $1 =)

Fantastic read, the best narrator yet!! Rates as high as Huck Finn narrated by Elijah Wood and Autobiography of Mark Twain, Volume one.

A meandering tour of the Mississippi River

Of the first fifteen chapters of the book, twelve are reprinted from “The Atlantic.” In the three introductory ones which precede these, the physical character of the river is sketched. The book was published in 1883. The book begins with a brief history of the river beginning with the Spanish explorer Hernando de Soto then on the French Marquette and La Salle.

The most engrossing section describes the author’s education as a steamboat pilot. Vivid details and anecdotes link the story of life on the River. He tells of the odd habits of the steamboat pilots. There is a section on how to read the river including the conformation of the banks, sandbanks, islands and inlets as well as sudden cut outs of the river after storms.

The rest of the book is an account of Twain’s trip down the Mississippi decades later as an old man. He describes the changes in the river and of American during his lifetime. The book is hilarious, fascinating, meandering tour of the Mississippi River most of all the book is entertain. Grover Gardner does an excellent job narrating the book.

It doesn't get much better than this!! Great place to start your own tour of the marvels of the Mississippi River. Grover, narrate more Twain works, please!

There are so many stories to enjoy t
in this book. I enjoy rereading and listening to it. Do not listen on speaker as this was the 19th century and there is liberal use if racial terms.

Life on the river.

A great story. The narrator does a great job. This book had everything. Mark Twain can make any subject interesting.

I find it impossible not to love Mark Twains writing style. Very seldom do I openly laugh during a story, but did several times with this one. I have never "wasted" a credit with MT. Now on to 'The Guilded Age".

*the narrator was great on this one too. Check it out.

Love the Book - Not So Much the Narration

I love Twain. I have read this book half a dozen times and listened to this Audiobook a few times.
On the whole, of course the Story is a Five-star rating.
But, I am VERY sorry to say, that although Grover Gardner is my absolute favorite Narrator, I do NOT like his readings of Twain.
Technically flawless reading, but I somehow expect a southern drawl or something like that - Gardner reading Twain seems a little "less" to me and perhaps a bit jarring.

A book of yarns and history

I loved The Innocents Abroad and was fascinated by its travelogue from Twain’s full-of-wonder perspective. But I found Life on the Mississippi bogged down by countless (and often pointless) anecdotes, particularly in the last half of the book. The first half of the book recounts Twain’s early life when he actually worked on steam boats. I enjoyed the vivid picture of that world.

The second half recounts a riverboat trip Twain took much later in life and that’s where it lost me. There is so much minutia about each little town and bend in the river. I understand it is history but I felt that the book needed a good editor to pare away the indulgent overly-detailed particulars of every little burg. And the yarns are mainly far-fetched whimsies, notable only for quaint characters. I wanted to love this book but I found it awfully tedious.

As always, Grover Gardner is a wonderful narrator. Nobody could portray Mark Twain better.

Not all that interesting

I know this is Mark Twain, ... However, it just did not seem that interesting to me.

Good narration by Grover Gardner who is persuasive as Mark Twain, the author. Will try some more by this voice actor.