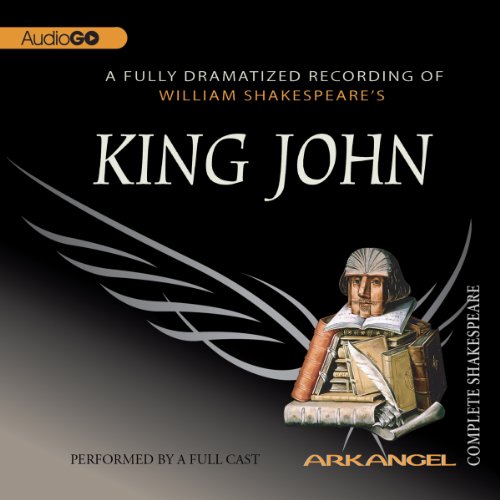 King John of England is pitted against the united powers of France, Brittany, Austria, and the Papacy. Will England be destroyed by his fatal indecision?

As alliances are made, broken, and remade, the paranoid and erratic John reveals his weakness and reliance on those around him - including his powerful mother, Queen Elinor, and Faulconbridge, the cynical and witty bastard son of the dead King Richard I.

In this early history play, King John is played by Michael Feast, the Bastard by Michael Maloney, and Constance by Eileen Atkins.

Life is as tedious as a twice-told tale

“Life is as tedious as a twice-told tale
Vexing the dull ear of a drowsy man.”
― William Shakespeare, King John, Act III.4

All I want is the bastard. I want Stoppard to Rosencrantz and Guildenstern Are Dead King John. The Universe revolves, uncorked around the Bastard not the King. I'm not sure who I want to play the Bastard, but he needs to be Laurence Olivier, Richard Burton, and Edmund Kean all unwrapped, warped, and twisted into one. He needs to be unhinged, demonic, and perfect: a ballet dancer -- spitting bullets and drenched in virtue's fire. The Bastard Philip demands it. Every play Shakespeare writes gives me a character I want to carry in my pocket. The Bastard proves I own no pockets large enough for Shakespeare's coin. Enough. I need to cool down. Think rationally. Gather my wits. The play itself was soft. 3-stars, small planets, at most, but I round my review up, as I round my day, week, and May up because I discovered the Bastard Philip today (and Lady Constance wasn't too shabby either).

How can you not love THIS,
a soliloquy on self-interest?

Mad world! mad kings! mad composition!
John, to stop Arthur's title in the whole,
Hath willingly departed with a part,
And France, whose armour conscience buckled on,
Whom zeal and charity brought to the field
As God's own soldier, rounded in the ear
With that same purpose-changer, that sly devil,
That broker, that still breaks the pate of faith,
That daily break-vow, he that wins of all,
Of kings, of beggars, old men, young men, maids,
Who, having no external thing to lose
But the word 'maid,' cheats the poor maid of that,
That smooth-faced gentleman, tickling Commodity,
Commodity, the bias of the world,
The world, who of itself is peised well,
Made to run even upon even ground,
Till this advantage, this vile-drawing bias,
This sway of motion, this Commodity,
Makes it take head from all indifferency,
From all direction, purpose, course, intent:
And this same bias, this Commodity,
This bawd, this broker, this all-changing word,
Clapp'd on the outward eye of fickle France,
Hath drawn him from his own determined aid,
From a resolved and honourable war,
To a most base and vile-concluded peace.
And why rail I on this Commodity?
But for because he hath not woo'd me yet:
Not that I have the power to clutch my hand,
When his fair angels would salute my palm;
But for my hand, as unattempted yet,
Like a poor beggar, raileth on the rich.
Well, whiles I am a beggar, I will rail
And say there is no sin but to be rich;
And being rich, my virtue then shall be
To say there is no vice but beggary.
Since kings break faith upon commodity,
Gain, be my lord, for I will worship thee.

I listened to the Arkangel full cast recording of the play along with reading in E Book format from the Delphi Complete Works of William Shakespeare. This is one of the history plays by Shakespeare published in 1596 and depicts the reign of “the Magna Carta” king, I can't say for sure but he might not have been viewed by history in a good light as he does appear to be a tad bit villainous. France's King supports Prince Arthur and his mother as the rightful heirs of England's throne as Arthur is the son of the eldest brother of John. King John is not having any of this treachery and goes to France where they end up fighting. Forget the fighting, a wedding ensues and we are enjoying this when a pesky messenger from Rome enters and spoils all the fun. Once again swords are drawn and the clash of medal rings out from the battlefield, well what's this..the English absconds with young Arthur....dire deeds are afoot and France comes to the rescue..well almost...some pretty intense moments here and when the play comes to an end, I am emotionally drained. Exciting and entertaining, however just reading the E Book without the audio would not make it so. I am enjoying reading and listening to Shakespeare this way, highly recommend.

The performance of the Bastard was laughably over the top. But literally everyone else crushed it. It helps to have a copy of the play in front of you to read along. Without faces for reference it can take a moment to recognize who is speaking making it easy to miss key information, especially in the beginning when the voices aren't as recognizable. Acting aside, the story itself is sublime and written by the Best, almost at his best.

Good production of an inept play

One of Shakespeare's few artistic failures. The characters are cardboard and the dramatic construction surprisingly inept. It's generally dated to around 1595, but it feels more like prentice work.

In the central sequence, France and England meet on a battlefield near the city of Angiers. They both demand the support of the city, but the civic leaders are in no rush to pick sides. So the two armies decide to join together in an attack on the city, raze it, then return to the attack on each other.

But then Pandulph, a papal legate, enters the scene and demands that the French King abandon his alliance with John, because John - held up, anachronistically, as a kind of Protestant hero - refuses to accept the Pope's choice for Archbishop of Canterbury.

And so reluctantly, after the hurly burly, we're right back where we started: France and England are at odds and are about to fight a battle.

In the battle that follows, King John takes Prince Arthur prisoner. Arthur is his nephew and another claimant to the throne. John wishes he could communicate his intentions mentally to Arthur's jailer, Hubert, rather than speaking them out loud. But Hubert plays dumb and forces John to say that he wants Arthur dead. Hubert agrees to do it.

But when we next meet Hubert and Arthur, the irons are in the fire - literally - and Hubert has a signed warrant to put out Arthur's eyes. What happened to the plans to kill him without writing anything down? Arthur pleads for mercy, and Hubert backs off.

But then he goes to tell John that Arthur is, in fact, dead. He hopes to secrete Arthur somewhere safe. John, aware now that killing Arthur was a mistake, turns on Hubert and berates him. But, says Hubert, "here is your hand and seal" for the deed. Clearly he shows a warrant to John; but which one? The one he showed to Arthur - the one that says Arthur is to be blinded? Or the one that says Arthur is to be killed - a warrant that John explicitly refused in the earlier scene to provide?

In any case, don't worry, says Hubert, I didn't really do it after all. Arthur is still alive and safe.

But in the meantime, unbeknownst to Hubert, Arthur tries to escape by leaping from a window and dies on the rocks below. So once again, after all the hurly burly, we're right back where the story was headed anyway.

It's almost as if two playwrights were working on the play but not exchanging notes while they worked. You definitely need a dance card for this one. SparkNotes has a good scene by scene summary.

The cast is great: Eileen Atkins, Michael Maloney, Trevor Peacock, Bill Nighy. They do their best. It's not their fault.

Good, but Not the best Balanced

I have started listening to the Shakespeare plays I no longer recall and this was one of them. It was better than I expected, but is not the most balanced of Shakespeare. The comedy is not as funny or biting as the best of his plays. Nevertheless there are some great scenes (as Hubert and Arthur).

I am very glad to have listened to this and may even listen again as I have never seen this performed.

The production is quite good, except the comic relief is weak.

This was a very well done version of King John. I recommend this to any Shakespeare fan out there.

Kind of boring, and I am generally a fan of Shakespeare's history plays. It just seemed like a bunch of situations to be administered, brokered, and reneged on with little foresight or overall strategy for England's future.