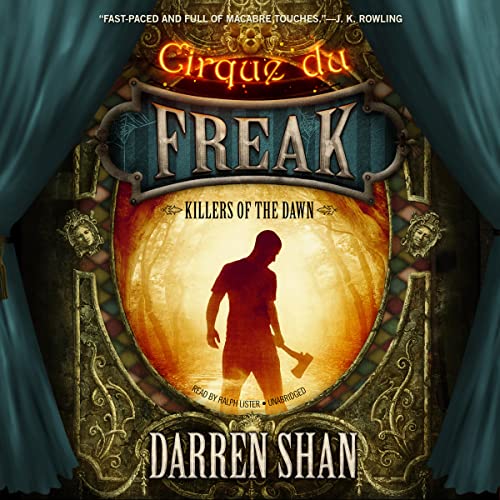 Killers of the Dawn

The hunters have become the hunted.

Outnumbered, outsmarted, and desperate, the hunters are on the run, pursued by the vampaneze, the police, and an angry mob. With their enemies clamoring for blood, the vampires prepare for a deadly battle. Is this the end for Darren and his allies?

This third and final installment in the Hunters trilogy finds Darren and his friends facing their longest night and most testing challenge yet.

I LOVE THIS SERIES! The story has unfolded a little more with every book. This book tied up several loose ends that I hadn't even realized were loose to begin with! It had everything. Funny one-liners, tear-jerkers, eye-openers, and loyal, unbreakable friendships. And in true Circ du Freak fashion...leaves you with a shocking, can't wait to start the next book, ending!

I'm unhappy that the author decided to kill off a lot of people's favorite character, Mr. Crepsley.

this is the most intriguing interesting creative book I've listened to in a long time! I cannot put it down, and I want more! I love the characters that have been created. I hope this series goes on and on and on!

Great listen.
will keep in my library to listen to now and then. Just loved it

Needs to be An Amazon Prime series 🥹

I forgot how heart wrenching the last few chapters are! I've loved this series since I was a child in middle school and I'm so glad to be in awe all over again at how great the collection still is!

During a crucial moment within the story. A character fights; and we think one thing when the truth isn't quite apparent. The author lies straight to the reader, which is a horrible lazy way of getting a emotional reaction, which is not worth it in the first place; because it is artificial, since the scenario isn't true. up until this point the series was phenomenal, but the scene within the book completely undermines its creative magnificence.

Better than the last book

Where the last book was slow this book was fast paced, and a lot of story happened. Great twist at the end too.

Too many blatant foreshadowing a.

Tried to look past the blatant attempts at saying who the unknown person was. Throughout this book and the previous one, it was just too blatant with the hints as to who it was. It was distracting and made it hard to look past. Other than that, it was a good continuation of the series.

Sadly "unexpected twist/s" was super predicable but enough plot development in other areas to make up for it.

This guy really knows how to do cliffhangers, oh boy, parts of this story though do show how young and naive Darren can be, but it’s done SO WELL! 3 books to go. And I’m hanging on now just like I was when I was a child.

Another excellent installment from the Cirque Du Freaks. I can't wait to listen to the next book.

absolutely amazing series, well written, well dictated. these books honestly have aged really well and are just as thrilling and entertaining as the first time I read them when they were initially released.

It hits the fan.

Unlike the previous books, this one is almost nonstop action. Ralph Lister, once again, delivers his best performance thus far. Darren Shan is both heartwarming and ruthless in his story telling. 5/5