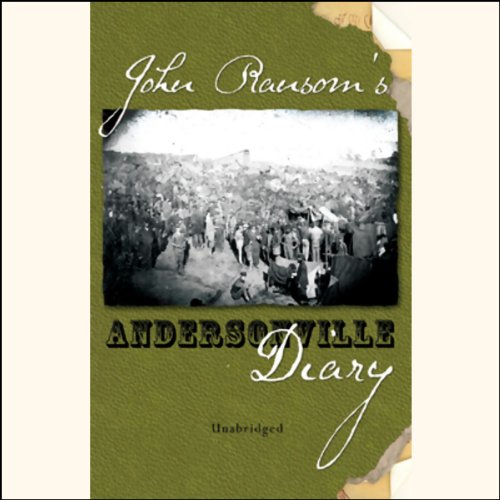 This book is an extraordinary day-to-day documentary of the Civil War's most infamous Confederate prison, Camp Sumter, better known as Andersonville.

Here 13,000 wretched Union prisoners died within barely 14 months, from starvation, scurvy, and other diseases that spread through the camp. There was little shelter but makeshift tents; little in the way of blankets, warm clothing, or even shoes; and a scarcity of food and fresh water. Often the men were forced to sleep on the muddy ground in very crowded conditions.

While the deplorable conditions bear witness to man's inhumanity to man, they also are witness to one man's undaunted spirit to survive to tell the dreadful tale.

The narrative in the diary reflects John Ransom's attitudes, changing from the moody early staccato sentences when he is first captured, to resignation, and eventually to cheerful prose when the war draws to a close.

This book was well read and was an easy listen. I had seen the TV Movie "Andersonville" and liked it, so I thought I would try out this book. This book gives far more detail into what life was like at Andersonville and also as a POW in the south during the Civil War.

No mumbling, no artificial stuff. No grade B movies heroes waving Yankee flag. Just the real thing. As if I was there myself. Get it.

This is a moving story of an admirable character in the most horrifying circumstances imaginable. The fact that this diary exists at all is incredible and shows the determination of the author to get his story told. I found this to be a good complement to Shelby Foote's monumental three volume work which does not cover this aspect. It is worthwhile sticking with it to the end in spite of the continual unpleasantness of many parts.

I didn't expect much from this, being that it's so old. I also expected it to be written in an overly-verbose way. I was wrong on all counts. It's very blunt and to the point. No lollygagging. It really puts you in the stockade with the prisoners. I'm sure not all of it is true, because obviouslly you wouldn't write a diary about escaping from prison while you're in prison, but it's a good book. Not boring at all.

The Ransom Diary should be considered an historic treasure in its chronicle of suffering and death at Andersonville during the American Civil War. David Thorn gives a great feel to John Ransom in his narration of the story. The story hides nothing, recounting raids among prisoners themselves to take what they can from those too weak to resist, the struggle to exist when nothing is given to exist on, and the humanity of others in the least likely of places. A sobering account of a worst case scenario in prison life during the Civil War.

For anyone who likes Civil War history, this is a great listen. You get to hear what daily life within Andersonville Prison was truly like. John Ransom captures the day to day struggles for the near year he spent here. The fact that he was able to survive the horrific conditions in this prison is proof of his strength of spirit. The only change I would have made would have been to have a younger man read the book - John Ransom is 20 - 21 when he is writing this diary but the narrator's voice is of a man seeming more than twice this age, which makes the listener forget just how young this man truly was while going through these awful conditions.

An incredibly moving piece of nonfiction that takes the glory and swashbuckling out of war and underscores Sherman's 'war is hell' view. Like the monument at Andersonville, a tribute to all POWs.

This is a unique and wonderful chronicle of man at his best and his worst. Ransom is such an honest and admirable voice. Andersonville is a notable stain on human history, but, just as in the German concentration camps, out of it sprang some reasons for hope in the indomitable spirit of some of the victims. You need to listen to this journal. And you need to think about it. It was a gift and miracle that this record was kept in the first place and equally remarkable that it was preserved. Thank heavens it was.

And it's an compelling story. No dry or disinteresting history here. You are drawn easily into Ransom's ordeal and cannot help but be touched by his humanity and hope and his gratitude for those around him who made his survival possible.

buy this book. only other book like it is,"one day in the life of ivan denisovitch". shows the inhumanity of man and of the humanity of man..must read for all. you will not be dissapointed.