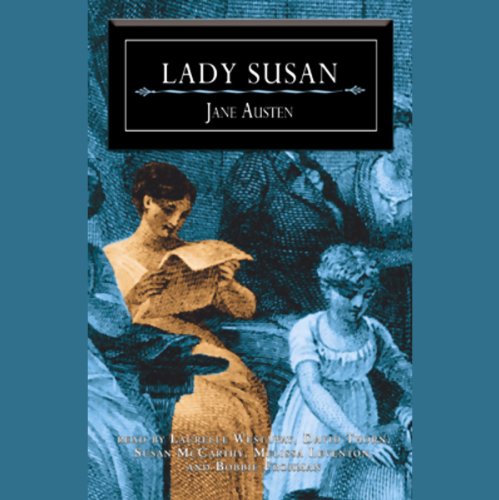 After Jane Austen's earliest known writings, she began a more serious work, Lady Susan, in 1793 or 1794. It is a short, epistolary novel that portrays a woman bent on the exercise of her own powerful mind and personality to the point of social self-destruction.

Lady Susan, a clever and ruthless widow, determines that her daughter is going to marry a man whom both detest. Lady Susan sets her own sights on her sister-in-law's brother, all the while keeping an old affair simmering on the back burner. But people refuse to play the roles assigned them, and in the end her daughter gets the sister-in-law's brother, the old affair runs out of steam, and all that is left for Lady Susan is the man intended for her daughter, the one neither can abide.

Jane Austen ended this work abruptly with the comment: "This correspondence...could not, to the great detriment of the Post Office revenue, be continued any longer."

"Character is revealed, plot unfolds, suspense builds - all through the device of letters exchanged amongst Lady Susan, her family, friends, and enemies." (AudioFile)

What on earth, the narration is downright irksome. I forced myself to finish! Why is the storyteller British and characters all talk with American accents. Some of the voices are like nails on the chalkboard! Save your 3 hours and listen to something else!

Drawn out and overly emotive narration!!! WHO ARE THESE PEOPLE??!! The person voicing Lady Susan's dialog is the worst. Can't bear to listen.

I can’t get past the narration. Will read the book instead. American voices for an English story. Confuses the listener... is this set in England or early America? No thanks! I like my Austen stories read by British narrators.

For years I have been waiting for audiobooks with multiple readers, which I believe, are much more convincing than a single reader production. Enter Lady Susan, I am glad my waiting isn't in vain.

it's fine. it's not Jane Austen's best work. to be fair, the voice acting was often over the top - even so much as to incite annoyance.

Lady Susan herself is a masterful manipulator and infinitely dislikable. the dissonance between wanting to root for her as the main character and generally despising her for her complete lack of regard for the feelings of others or the ethics of her own behavior is at least interesting to explore.

it's short enough that I don't regret reading it, but I don't need to read it again.

Love the text but not the readers

The story is great, but these readers don’t quite capture the language well. The intonations seem off. The voice of Lady Susan sounds much older than the character’s age.

Imagine the cast of Waiting for Guffman when you listen to this. It will be (with heavy handed tone) infinitely better.

It kept my attention. it wasn't like other Jane Austen books but still, it was interesting.

just as annoying as the movie

Not my favorite Austen tale. Turns out it wasn't Kate Beckinsale that ruined this story for me after all! Sorry Kate!

Performances of many are ridiculously overwrought, even if one excuses those not using English accents.

only the author, I have just read this in book form - totally preferable

Would you be willing to try another one of the narrators’s performances?

Not if they are attempting English accents

No, apart from the male narrator, even the actors had different american regional accents which really grate - some try to sound a little English, in patches, but without much success.

The pronunciation is dire Main Wairing for the anglicised Mannering. Churchill for ChurchHIll.

I don't quite understand as Audible narration and readings are usually good, or even outstanding. Here we have high-pitched voices with slow reading trying to hide their American accents beyond fake Anglo-British accents. The results are a homicide on Jane Austen's epistolary novel! It would have been wiser if not British performers were not available to stick to just regular American accents instead of this awful mixture.

Really struggled with this

I love Jane Austen.
I struggled with this audiobook though as it was in my opinion completely wrong - the accents were all over the place and made it hard to listen to.

Were there no actors who could do a British accent available? it's Austen! Come on.

enjoyment for any Austen devotees

Initially the American accents annoyed me; but ignoring the reference to Bath, it works tolerably

oh dear why oh why have they used American narrators, I simply cannot finish it its awful. The story howver is so good , its witty and lively, what a shame.

I liked the story, but the American accent sounded so out of place, and the overly juicy intonation was quite annoying.

Loved it like the rest of austen's work. Consistent pacing. Written as a series of letters which is interesting.

I hadn't realised Jane Austin wrote for the American Market. Picky, maybe, but surely we have enough 'English' speaking narrators to hand.

Very rarely do you come across a story where the main character is a scheming manipulative person and still wanting to root for them. A simple story though and could have used more interactions between the characters. I wasn't sure though about employing people who aren't British as the pronunciation of a number of names and places was a bit strange.