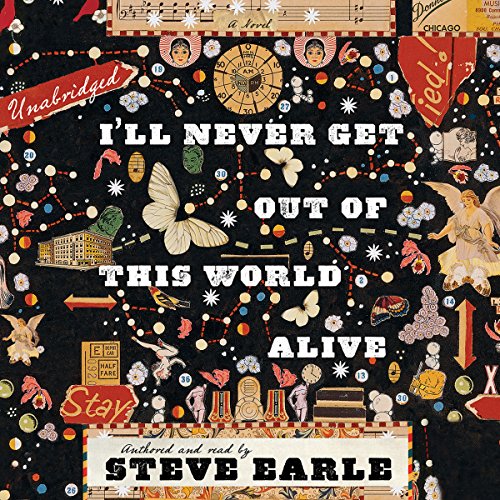 In 1963, ten years after Hank’s death, Doc himself is wracked by addiction. Since he lost his license to practice medicine, his morphine habit isn’t as easy to support, so Doc lives in a rented room in the red-light district on the south side of San Antonio, performing abortions and patching up the odd knife or gunshot wound.

But when Graciela, a young Mexican immigrant, appears in the neighborhood in search of his services, miraculous things begin to happen. Graciela sustains a wound on her wrist that never heals, yet she heals others with the touch of her hand. Everyone she meets is transformed for the better, except perhaps for Hank’s angry ghost—who isn’t at all pleased to see Doc doing well.

A brilliant excavation of an obscure piece of music history, Steve Earle’s I'll Never Get Out of This World Alive is also a marvelous novel in its own right, a ballad of regret and redemption and of the ways in which we remake ourselves and our world through the smallest of miracles.

©2011 Steve Earle (P)2011 Blackstone Audio, Inc.
“This subtle and dramatic book is the work of a brilliant songwriter who has moved from song to orchestral ballad with astonishing ease.” (Michael Ondaatje, New York Times best-selling author)

I've long considered Steve Earle one of our greatest living writers, but until now I had only done so in terms of his brilliant body of work as a singer/songwriter and musician. Sure, I'd read 'Doghouse Roses,' his collection of short stories, and I was highly impressed with it. But only now -- after reading his debut novel, 'I'll Never Get Out of This World Alive' -- has his vast talents as a writer of prose come fully into focus. What Earle has accomplished in this novel is no small feat: an unwaveringly empathetic view of the poor, the dispossessed, the addicted, and the lost; a cast of characters both living and dead, all equally believable and important to the narrative; a melding of old world and new world religion, of Catholicism and native belief systems; a deeply complex understanding of the fine line between morality and sin; and breathtaking portrayals of beauty and violence, of love and loss, of addiction and recovery. What's more, this is a book that must be LISTENED to. Whether you are a fan of audiobooks or not, you would be doing yourself and this novel a disservice to merely read its words. Earle's narration is beyond powerful, slipping seamlessly inside and outside of his characters, delivering his prose with force and grace and not the slightest hint of arrogance, and -- most wonderfully -- occasionally singing the words to the songs of Hank Williams (whose ghost haunts the novel's protagonist). This is an all-around ABSOLUTE MUST of a listen.

The Down and Out get a spiritual renewal

Steve Earle's voice and twang really drew me in. This is a good story of how the lost make their way in a hard-scrabble existence. The characters are believable and while their actions are questionable, you can it is all they can do to get by.

What does Steve Earle bring to the story that you wouldn’t experience if you just read the book?

I find that audiobooks greatly enhance the written word with tone of voice, pacing, rate of delivery, volume, etc. The book is "performed" for the listener and Steve Earle did this very well.

One of my favorite books.

I have recommended it to friends.

What other book might you compare I’ll Never Get Out of This World Alive to and why?

It's unique - I think it stands by itself.

Have you listened to any of Steve Earle’s other performances before? How does this one compare?

I've always enjoyed Steve Earle's music, but it was a real pleasure to discover his writing talent.

I purchased this book AFTER I'd already listened to it twice for free as an audio loan from my library. It's like an old friend that's good at making you laugh until you cry - you just want them close by.

It takes a lot for me to give five stars all the way around, but this book did it for me.

At first I was scratching my head at the selection of the narrator (not realizing it was also the author) because of his voice and slight slur. But the voice--and the slur--really captured the mood and the character of Doc, the main character. Not to gush, but...Steve Earle was awesome!

Know what I didn't like? It was just too short. Well, not really. It was long enough to tell the story effectively. But I just wasn't ready to say good-bye to the characters.

What other book might you compare I’ll Never Get Out of This World Alive to and why?

My favorite scene is the one where Marge, Dallas, and Graciela get excited about the coming visit of Jacky Kennedy.

Lively characters are set in a dramatic context. The roles of Doc, Manny, Dallas and especially Graciela, give me a feeling of the 1950s/1960s at the seamy side of life. What about a junkie doctor who does abortions, and is visited by the late Hank Williams in his weakest moments? It may sound far fetched, but Steve Earle makes it into an authentic slice of southern life as it might have been.

Expect to be a fly on the wall in this story

Yes I would and did, the book held my interest from the first paragraph with the totally real characters and places, it put me there with the story.

The people with their real highs and lows, plenty to be kept wondering what will happen

His Texan drawl fit perfectly and the book flowed as natural as as any I've ever heard.

I hope there are more books to follow from Steve Earle

Great book!! Great message!! Great narration by the author!! This book leads you on the story of two subjects that can cause a person great self hatred but helped me understand that kindness and compassion can be the cure for both and sometimes those choices aren't what dogma preaches!!

A genuine
gem of a novel told exceedingly well. Narration is so critical and Mr. Earle was the man to read it. Thoroughly enjoyed

While Steve Earle has proven himself as a great storyteller over the years through his lyrics, he may be even more so as a novelist. This book has realistic characters and a compelling storyline that is truly unique in a world filled with remakes and sequels. While the story unfolded I was interested and trying to anticipate what would "happen next". But what really impressed me was how the story made me think about current events. Several times I had to pause the audio as the events of the story had my mind drifting into social issues relevant in our world today. Thanks Steve, keep 'em coming!

Yes because I cannot imagine any better way of accessing the book than having this author read it to you.

Doc was my favourite character because he was so complex but I loved Hank and almost all the others too.

Which character – as performed by Steve Earle – was your favourite?

Doc was my favourite again but I enjoyed the singing Hank very much.

I have been recommending this to everyone but as an audiobook because I feel this is the superior way of hearing this book with the actual Mr.Earle reading. Phenomenal.

Much better than a rock star project

If you could sum up I'll Never Get Out of This World Alive in three words, what would they be?

Give it a try if you like true detective .I am a big Steve Earle fan. Having said that I like the Rolling Stones too. I'm not sure I would rush to buy a novel written by Mick Jagger. Which made me nervous about falling for the unquestioning rock fan approach of buying this novel. I'm surprised and a little bit humbled have to say that all my misgivings were wrong.

Would you recommend I'll Never Get Out of This World Alive to your friends? Why or why not?

It's not the greatest story I've ever come across. Against that it has a totally convincing portrayal of a small impoverished but incredibly spiritual and loving world in an utterly hostile if not dangerous location in a part of Texas none of us would ever want to visit nevermind live in.

What does Steve Earle bring to the story that you wouldn’t experience if you had only read the book?

In one word his "drawl" I assume it's authentic Austin Texas. At any rate its brilliant

Anyone can be redeemed.

You never listened to the music of Hank Williams - you should