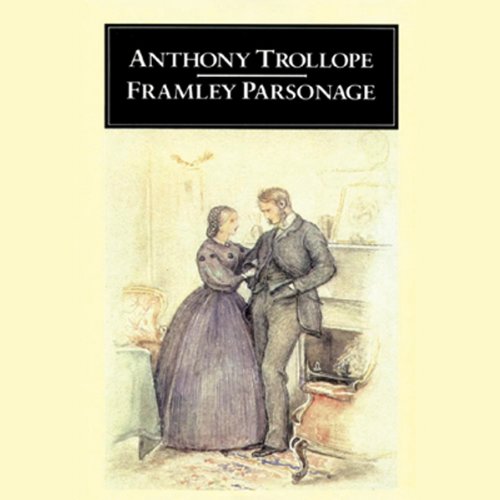 Mark Robarts, a young vicar, is newly arrived in the village of Framley. With ambitions to further his career, he seeks connections in the county's high society. He is soon preyed upon by a local member of parliament to guarantee a substantial loan, which Mark, in a moment of weakness, agrees to, even though he knows the man is a notorious debtor; it brings Mark to the brink of ruin.

Meanwhile, Mark's sister, Lucy, is deeply in love with Lord Lufton, the son of the lofty Lady Lufton. Lord Lufton has proposed, but Lady Lufton is against the marriage, preferring that her son choose the coldly beautiful Griselda Grantly.

The novel concludes with four happy marriages, including one involving Doctor Thorne, the hero of the preceding book in the Chronicles of Barsetshire series.

"One of the great English Victorian novelists....A sharp but sympathetic observer of Victorian social and political life." (Daniel S. Burt, The Biography Book)

Hooray for Audible for adding this and Doctor Thorne to their library. Simon Vance does a nice job reading. If you are new to Trollope, you are better off reading the Barsetshire series in order for a full appreciation of some of the secondary characters in this novel. Start with The Warden.

Trollope is an author who specializes in fine irony, and so it takes a particularly skilled reader to convey that tone without overdoing it. Vance is perfect. Although it may take a while to becoming involved in the story -- which at first seems like a trivial matter of a rural parson deciding to visit a duke's house despite the wishes of his straitlaced patroness -- the stakes grow ever higher, a love interest emerges and one of literature's great scoundrels appears. Soon enough, you'll be laughing out loud and looking for excuses to get back in the car and hear a little more.

The Chronicles of Barsetshire should, as the heroine of this story suggests about a certain male character, come with a warning label. It would read something like: “DANGER: These novels will not cause drowsiness. May be taken with alcohol. Side effects include laughter, tears, utter delight and a complete inability to stop listening”.

According to Wikipedia,Trollope described this fourth Barsetshire tale this way: "The story was thoroughly English. There was a little fox-hunting and a little tuft-hunting, some Christian virtue and some Christian cant. There was no heroism and no villainy. There was much Church, but more love-making." But that hardly does justice to the delights of this story.

Foremost of these is that, being the fourth of the series, Trollope has now established enough characters and enough geography (even going so far as to opine that he may have to make a map for our easy reference) that men and women from previous volumes begin to weave in and out of this story. The good Doctor Thorne is back, as is the good-hearted (if somewhat loud) Miss Dunstable. The Archdeacon and his family also figure prominently, as do the present incumbent at the episcopal palace in Barchester, along with the real power behind his throne, the Bishopess Mrs. Proudie. Even Mr. Nearthewinde and Doctor Fillgrave have cameos. The whole effect, as with Faulkner’s Yoknapatawpha County or P. G. Wodehouse’s England, is to make us feel we have stepped into a perfectly three-dimensional world. I was delighted to find out, for example, that Frank and Mary Gresham were happy together after everything they had undergone in the previous story. Trollope is a master at creating characters one cannot help caring about. Even Nathaniel Sowerby, the closest thing we have here to a villain, does not merit our complete, heartfelt opprobrium.

Another aspect of these novels that make them so dangerously addictive is, I think, the underlying good humor of Trollope’s style and outlook. I find myself smiling as I listen, and wanting to get back to Barsetshire whenever I’m not listening. And Simon Vance expresses that sly, knowing, yet not cynical humor to perfection.

Trollope is always a delight and the narrator here is terrific. Let's have more Trollope audible!

Could not hope for better

Trollope, of course is wonderful, and the reader is absolutely marvelous. I look forward to hearing more works by him.

Framley Parsonage, the penultimate book in the Barsetshire Chronicles, covers familiar territory and brings back a number of characters from earlier novels: Dr. Thorne, his niece Mary (now Mary Gresham), Miss Dunstable (whom I was particularly glad to meet again), the Grantleys and the Arabins, for starters. Of course, new characters also appear, primarily the Ludlows and the Robartses, and the setting shifts between rural towns and London.

While I enjoyed this novel, I need a Trollope break before going on to the final installment. I feel a bit overloaded with snobbish mothers who come between their sons and the worthy but common young women they love, male golddiggers trolling for wives, and cads who bring their friends to financial ruin.

Simon Vance reads flawlessly, evoking each of the many characters through subtle accents and various inflections. You could not ask for better. And the story is, as Trollope's always are, full of the human circus and all its foibles. Is it possible to tire of Trollope? I haven't yet. Poignant and laugh aloud funny, with endlessly recognizable characters, full of pride, love, greed, hope, asininity, clearsightedness, you name it. You're included. Everyone gets their just rewards, or punishment, and all the fun is getting there. One of the best.

What more can I say? It's Trollope

I just love Anthony Trollope. Oh, and Miss Dunstable! All of these characters have become my friends, especially with Simon Vance as the voice of Trollope.

A Trollope favorite! I usually have a hard time caring about characters, hence really getting into this author’s stories, but THIS! BRAVO too the narration

Why I love Trollope

Before judging Trollope remember his books were serialized. He was paid for being wordy. He didn’t have an editor. His insight into human nature are right on. I find it comforting that nothing has changed. There weren’t any “good old days”. I know some of his characters right now.

Throughout the series Simon Vance has taken all his characterisations from 1950's British films. Here he also gives one minor character a Scottish accent in an early chapter, to speak a dialect no Scot ever spoke. By the end she has a more realistic Mummerset instead. Mark Robards is too old, and Mrs Crawley, a gentlewoman living a hard and poverty-stricken life, is given a working class accent thus distorting her completely. Oh dear.

Simon Vance is great as always, but some female voices almost slipped into caricature, and Mrs Crawley was almost portrayed as someone of limited intelligence and understanding - despite her being one of the most poignant and complex characters in the book.
Nonetheless - Simon Vance still reads this brilliant book, brilliantly overall.
The light and humour that Trollope cast on his characters' very human stories 160 years ago, are still as spot on and gripping as anything you could find in the headlines today.
So it's great that Audible now offer this book free to members.