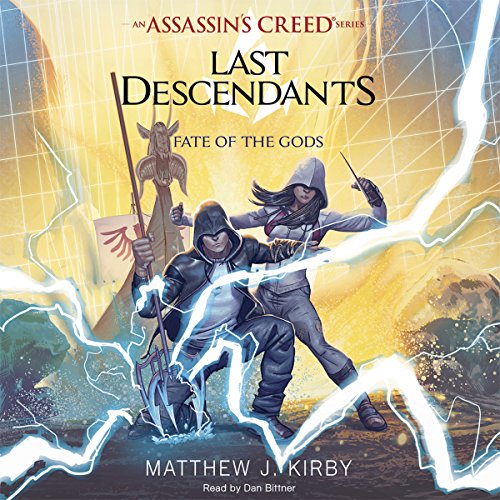 Only one piece of the Trident of Eden remains - Isaiah, a rogue Templar agent, has discovered both the faith prong and the fear prong of this powerful relic. Should he possess the devotion prong, there is little that can stop him. For the time being, Owen and his fellow teens have established an uneasy alliance across Assassin and Templar lines in order to stop Isaiah while they still can.

Over a thousand years earlier, Styrbjorn the Strong, a Danish warrior, leads the Jomsvikings against the Danish king, Harald Bluetooth. It is on those Viking battlefields that the secrets of the devotion prong lie. It is there that the fate of the world, the truth behind the teens' collective unconsciousness, and their ancestral links to one another lie. History has already been written. The rest is up to Owen, Javier, and the other members of their unlikely alliance. The actions they take will change the world of Assassin's Creed forever.

Sad to have reached the end.

I really enjoyed this book and the other books in this series and sad it is over.

This story is the conclusion of a short graphic novel. It had has many twist and turns and is hard to believe that they are only teens from high school. But it is a fine story if you like the assassin creed series. Check them out whem you can.

the series has had a fitting end. completely in line with the Assassin Creed games. as with the other 2 books the story draws you in. Also I loved that the author left a possible thread to continue with the characters. I hope he does!

loved the whole series can't wait for more. you can tell the voices where different for each character

Best book in the theology

Very interesting novel!
Especially to the fan of Assassin's creed like me~

I really enjoyed reading this book
except only that assassins cant show some active play
though it is one of assassin creed series.

I hope read next series soon (:

Nice end to the trilogy. It has referenced to alot of familiar characters that appear in the games