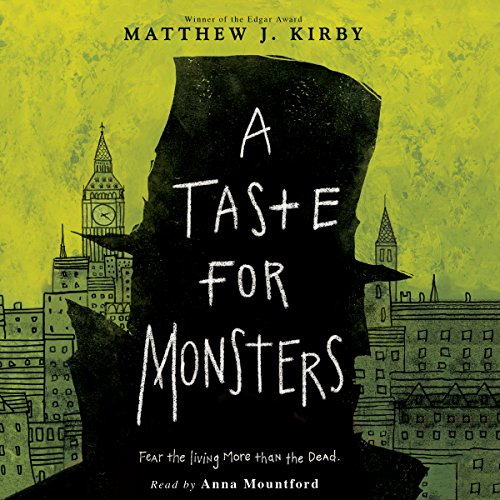 A Taste for Monsters

The mesmerizing story of a young woman in Victorian London who, haunted by the ghosts of Jack the Ripper's victims, is set on a terrifying path to salvation.

The real monsters are men.

London 1888, and Jack the Ripper is terrorizing the people of the city. Evelyn, a young woman disfigured by her dangerous work in a matchstick factory, with nowhere to go, does not know what to make of her new position as a maid to the Elephant Man in London Hospital. Evelyn wanted to be locked away from the world like he is, shut away from the filth and dangers of the streets. But in Joseph Merrick, the Elephant Man, she finds a gentle kindred who does not recoil from her and who understands her pain.

When the murders begin, however, Joseph and Evelyn are haunted nightly by the ghosts of the Ripper's dead, setting Evelyn on a path to facing her fears and uncovering humanity's worst nightmares.

A terrifying and haunting tale from the Edgar Award-winning author of Icefall and the Assassin's Creed novels, Matthew J. Kirby.

I had high hopes for this novel, but I was unprepared for how thoroughly it won me over. I was entranced.

As a historian, I'm very interested in the Whitechapel murders and their context in the East End of London, and the careful research in evidence in A Taste for Monsters satisfied me deeply. I've walked in the characters' footsteps at London Hospital, Spitalfields, and Whitechapel, and I delighted in the sharp detail Kirby brought to the story.

But there's so much more. So many times in historical novels -- especially YA novels -- the desire to have a plucky, gutsy heroine leads to all kinds of anachronistic behavior, dialog, etc. Not here. Evelyn is an outstanding heroine, a young woman disfigured by her work with poisonous phosphorus as a "matchstick girl" and struggling to find a means of supporting herself with dignity. Similarly, Kirby addresses Jack the Ripper in a most refreshing fashion, focusing not on following the monster who killed but instead on restoring and respecting the humanity of the women who were murdered.

This entire story is shot through not only with delicious Gothic atmosphere and genuine peril, but also with gentle, humane insight. Evelyn's work and friendship with Joseph Merrick, the Elephant Man, is a centerpiece of this mystery/horror/historical/coming-of-age story, and it's simply beautiful.

I can't recommend this enough!

My taste was sated.

Excellent in all its iterations. Kirby is a master storyteller and he knows how to research and utilize his knowledge to make the setting, time period and characters come to life. This story expresses more than a taste for monsters but a love.

Perfect in every way

Inventive story and around real characters. The audio is fantastic. Strongly recommend for YA and up.

This book was so Intriguing, I couldn't stop reading it. I recommend it alot. Later

It just went a bit too slow for me

The performance kept me in long after I would have simply stopped listening and given up that I had simply picked a book by the cover. The title and cover was enough to draw me in....but the story fell flat quickly. I tried to speed up the pace, but finally just gave up. One of the rare times I just could not get to the end.

Wonderful book, beautifully narrated by the reader. A dark story with blinding bright light at its heart.

Wasn't what I was expecting. It was better!

I expected a detective story with a beautiful heroine, her stalwart sweetheart and faithful side kick. What I got instead was a story focused on redemption, compassion and self acceptance. The author has created a story rich with accurate historical detail about London, Joseph Merrick and the London Hospital. By focusing on the victims, rather than the killer, the story can dive into the lives of the lower social and economic classes. He reveals the limited and tragic choices forced upon these women without romanticizing them and so reveals their humanity. The author's theory on Jack the Ripper, whom he refers to in the more accurate name for the time, Leather Apron, is both obvious and incredibly ingenious. One warning, he does not flinch from explicit descriptions of the murders, or of sexual assault.

A tale that lingers in the heart

The tale is enchanting in the most unexpected and unique ways that can only arise from the quirky, intense life and times of Whitechapel District of Victorian London. Matthew J. Kirby weaves together a narrative with such rich characters and intricate, emotional depth that you truly feel the heartbeat of a tormented place in time and cannot help but shed a tear in its honor and in respect of its people's perseverance amongst such turmoil. The narration brings the characters to life in such a perfect way, you feel as though you are standing in a room among them. The accents and cadence of each is absolutely delightful to listen to and breath additional life into an already chock full story. Superb!