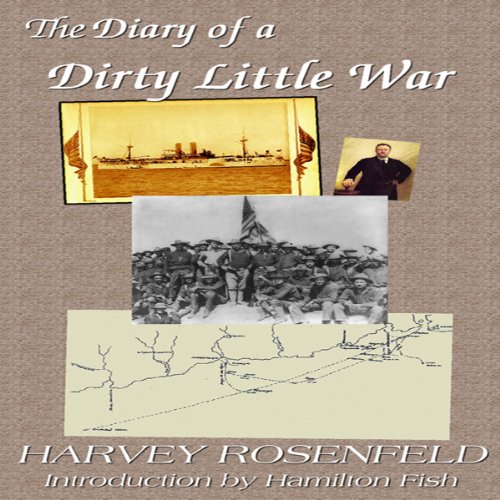 Diary of a Dirty Little War

From its beginnings, America has acted out much of its history on the battlefront. Yet for the average American, little is known of the Spanish-American War. The reasons for our entry never seemed compelling - at times, yellow fever seemed more the enemy than did Spanish troops - and the United States was ill prepared for the venture. Nevertheless, this conflict served to unify a country that only 30 years before had been hopelessly divided by civil strife.

This colorful account reveals how every aspect of American life was ultimately touched by the war. War heroes abounded in the Spanish-American war: George Dewey, Richmond Pearson Hobson, Joe Wheeler, William T. Sampson, and of course, Teddy Roosevelt and his Rough Riders. Rosenfeld strikes a balance between scholarly and popular writing, bringing to life a war that has often been overlooked.

"Rosenfeld brings in an impressive world wide scope. What unfolds is a living history enthusiast's dream, a cornucopia of the way things really were at a specific time in a particular place!" ( Reviewers Consortium)

A lot of information. Viscerally cover the details of the battle as in-depth as I would have liked.

Disappointing in all aspects

First, the reading. If not by a computer, far more boring than one. I found my mind drifting constantly. Second, the story. It is effectively a chronology of the press and papers around the war. That's fine, then bill it as such. It is not a thesis or author's opinion that is argued based on merit an fact. Rather, just a chronology. No doubt countless hours went into the research and I am happy to have benefited from the insights into the society at that time. But I wanted a point of view which was not delivered.

Yes. The Spanish-American War in many ways a forgotten war, but it had a very large affect upon America at the time. In this first major war after the Civil War, Northerners and Southerners alike banded together to fight what they saw as Spanish tyranny upon the poor citizens of Cuba, and viewed themselves as liberators, bringing freedom to a people closely. This book’s narrative is in diary form, as you see the progression of the war as each day progresses. Rosenfeld does a magnificent job telling this story, and it is one of the best treatments I have ever read of the Spanish American War. Some called it a “splendid” little war, others called it a “dirty” one, but the story is fascinating either way.

I am sorry to say, Ian Esmo was a terrible reader, at least to my ears. I have listened to over a hundred audio books, and Esmo is one of the worst I have ever endured (which surprises me, as presumably Audible would want to choose quality readers.) When I first started listening to it, I almost believed I was listening to a computer synthesized voice, due to his very unnatural inflections, and awkward pauses in reading (I actually had to look up to see that this was an actual person). If not for Rosenfeld's compelling narrative (wonderful book), I probably would not have completed it, that’s how unpleasant I found the listening experience. As the hours progressed, I got accustomed to the awkward reading style, and admittedly, he did do a reasonably good job simulating the voices of individuals portrayed. Esmo may have a talent for reading, but why he would choose to narrate in the fashion he did escapes me. Perhaps he is paid by the length of time, and chose to be deliberately (and awkwardly) slow? Or maybe he was bored by the material, and just let the words go by as he read? I don’t know, but I will definitely avoid this reader in the future. His reading was too painful for me ever want to endure again.

Enumeration of supplies delivered to Army is just not necessary in body of book. Narration clipped. One of the very few books I was unable to finish.