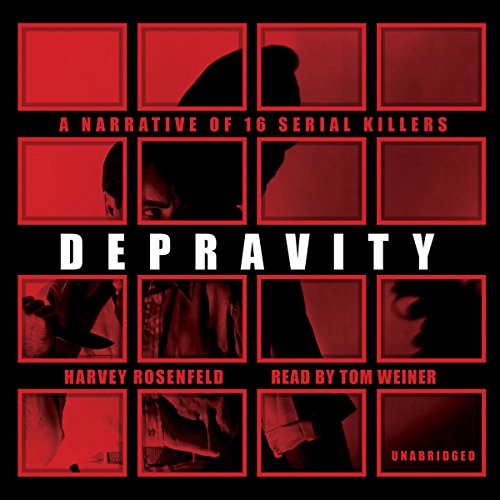 Their crimes span the globe, but one thing unites them: They are 16 of the 20th century’s most notorious serial killers.

In this well-researched volume, discover their motives and what made them tick. Walk the path of the investigators who broke their cases and listen to the killers’ own words.

All of them made their communities tremble in fear. They include:

Johann Otto Hoch, who moved to America from Germany in the 1890s and married a string of women. Instead of being the man of their dreams, he became their worst nightmare.

Fritz Haarmann, "The Vampire of Hanover", who killed dozens of young male vagrants and prostitutes from 1919 to 1924 in Germany.

Robert Hansen, who began killing prostitutes in Alaska around 1980. He let them flee in the wilderness before hunting them down with a knife and rifle.

Learn about these and other serial killers. See what motivated them to lead such horrible lives and how they were finally brought to justice in Depravity: A Narrative of 16 Serial Killers.

Harvey Rosenfeld, a lifelong baseball fan, is the author of several highly regarded biographies, including Raoul Wallenberg: Angel of Mercy and Roger Maris: A Title to Fame, one of the American Library Association’s best books of 1991. He teaches at Pace and St. John’s Universities and is the founding editor of Martyrdom and Resistance, a Holocaust bimonthly.

If you enjoy books about Serial Crime....Skip this

This book is just badly written. I have read most of the sources which the author quotes, (Encyclopedia of Serial Killers, Whoever Fights Monsters, everything by BSU leaders Russ Vorpagel, Robert Ressler, John Douglas) as well as a great deal of the professional literature and I was actually offended by the use of these works as sources for this dull, incomplete, and poorly written (timelines are wrong etc.) narrative

Would you ever listen to anything by Harvey Rosenfeld again?

I seriously doubt it. This man is an English Professor and has no Psychological or Criminal Justice credentials that I can find. He talks about the rise of the commercialism of serial murder in the US in the 1990's and all I can say is he speaks from experience since this book was written not to enlighten, but to cash in on a certain genre.

The narration was fine, it's hard because when a narrator is given garbage, it's sometimes easier for your mind to blame the voice

Anger....that I wasted a credit on it.

Do yourself a favor. Don't buy this book. You are better off reading Ann Rule (and I don't say that lightly)

What disappointed you about Depravity?

I do not think the book it self is bad I just could not stand the narrator. It was a little too boring for me and I found myself not engaged and drifting when listening to this book.

Hard to Get Through

No, it was pretty boring and not very in depth.

Would you be willing to try another book from Harvey Rosenfeld? Why or why not?

Yes, but I would read a lot more reviews first.

Would you be willing to try another one of Tom Weiner’s performances?

No, I am about to fall asleep listening to him.

Did Depravity inspire you to do anything?

Since this book is non-fiction, there is no real ending. No conclusions are drawn, and no real point to the book is made.

The descriptions of the various killings are quite matter of fact, and there is no "edge of your seat" feeling to any of it. Again, since most of the killers in this book lived 100 years ago, there is no sense of urgency and everything is quite flat.

I was very disappointed with this book. It was far to dry and not at all the kind of book I would recommend to anyone.

I would rather read another Ann Rule book than anything else like this...and I don't really like Ann Rule.

I am a True Crime fanatic. From physical books to podcasts to all my books here on Audible are all in the genres. This Audio book held no surprises or information I already knew. .I woukd recommend it to snyone who is new to the genres but for long tine listeners it holds no value.
The narrator was very good. hecwoukd be even better if had good material.
Sorry Mr Rosenfeld but your audio book was not for me but it's excellent for newer converts 😞