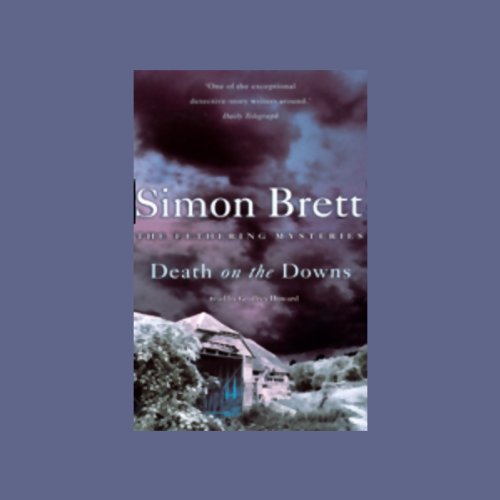 It isn't the rain that upsets Carole Seddon during her walk on the West Sussex Downs. It isn't the dilapidated barn in which she is forced to seek shelter. No, what upsets her is the human skeleton she discovers there, neatly packed into two blue fertilizer bags.

So begins the second investigation for strait-laced Carole and her more laid-back neighbor Jude. This time their inquiries take them away from their seaside village of Fethering to the small downland hamlet of Weldisham.

There gossips quickly identify the corpse as Tamsin Lutteridge, a young woman who disappeared from the village months before. Detective Sergeant Baylis will confirm nothing. So why is Tamsin's mother, a friend of Jude's, so certain her daughter is still alive? Why is village elder statesman Graham Forbes suddenly taking an interest in Carole? And why is the decidedly unstable Brian Helling so keen to announce that there is a serial killer on the loose?

As Jude sets out to find Tamsin, either dead or alive, Carole digs deeper into Weldisham's history and the bitter relationships simmering beneath the village's gentle facade.

This second Feathering mystery finds "proper" Carole, caught in a downpour while walking on the downs. Taking shelter in a dilapidated and deserted old barn, Carole was shocked to find two fertilizer bags of old human bones. Thus, Carole, and her new-age friend, Judy, begin their second quest for discovering who was murdered in Feathering, and which one of their friends or new acquaintances are responsible for the death.

Brett has once again populated his book with many unique and quirky characters. Family resemblances, and traditions play a large part in this book, as do various types of games. Of course, Carole's game of choice is the cross word puzzle, but another local family is heavily involved in role playing games.

I enjoy Brett's books for their satirical outlook on British county life, and the characters that he develops wonderfully. Added attraction is trying figure out WHO was murdered , as well who did the murdering and why they felt the need to do so.

I love Simon Brett. I delight in Carol & Jude's adventures as amateur sleuths. In this story Carol takes charge, something she has been loath to do.The banter between these two is simply wonderful!

Better than the last

I am sorry that I overlooked this series for so long. Most British cozies that I have read are slow and boring. I can't say that about this series, especially, this book. In this installment of the Feathering series, Jude's and Carole's personalities continue to develop and change because of their growing friendship. Jude is more conservative in her thinking an actions while Carole is allowing herself to be more outgoing and daring.

Carole likes to take long walks. It is while she is in a neighboring village taking a walk that she stumbles on to a bag of bones. This is where the adventure begins. The two friends investigate the murder and discover that the village if full of suspects and motives. During the investigation, Carole makes a discovery that affects her personal life, while the ever mysteries Jude struggles to make a decision about her personal life.

This book is more developed than it's predecessor. I even managed to overlook the fact that a man is narrating for two women. I definitely recommend it. I have already bought the next book in this series. I hope it is just as good or better than this one.

Would you try another book from Simon Brett and/or Geoffrey Howard?

I bought Death on the Downs because I had heard a reading of the first Fethering Mystery on the BBC and I enjoyed it. So I thought I'd give the second one a try. What I realise now is that either Simon Brett wrote the second book in an extreme hurry or the BBC did a wonderful job editing the first book. Given how dull and repetitive Death on the Downs was, I think it might have been the latter.

This book is too long winded, the language is repetitive and the story just does not make any sense. The characters are not developed logically and the manner in which they conduct their investigation is completely nonsensical. Yes, this is supposed to be a lighthearted murder mystery, not an intellectually challenging novel. But it is still possible to write well! The dialogues are so long winded and contrived it makes one cringe.

What was most disappointing about Simon Brett’s story?


Not even a genius of an actor could save this book, unless it was heavily edited.

Formula story with weak characters. Okay for an airplane read. Writing not bad but could be a television script.

This is a interesting cozy mystery. Well written and good performance. I've read the first book as well and am starting the third as soon as I press submit on this review.

I like these characters and thier way of investigating even though they aren't detectives.

Another enjoyable listen. I sped up a few parts at the end, but it was entertaining enough for me to want to pick up the next one.

I am really enjoying this series. I was looking for something similar to the Cherringham series which I greatly enjoy. Bunburry didn’t do it for me, but this one is very good.