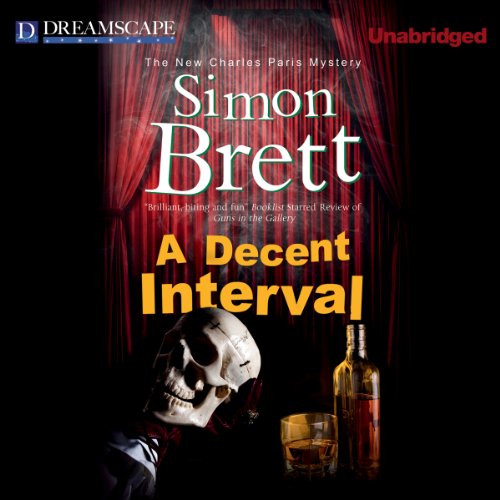 After a long period of "resting", life is looking up for Charles Paris, who has been cast in a new production of Hamlet. But rehearsals are fraught. Ophelia is played by Katrina Selsey, who won the role through a television talent show. Hamlet himself is also played by a reality TV contestant, Jared Root. But when the company reaches the first staging post of their tour, matters get more serious, with one member of the company seriously injured in what appears to be an accident, and another dead. Once again, Charles Paris is forced to don the mantle of amateur detective to get to the bottom of the mystery.

Charles Paris is a welcome event. I give it four stars but regard it as top of the line for what it is--a genre mystery. Great main character, great setting anud Brett's love show business in all of its manifestations as he gently mocks it shines through as always.

This is a current installment in the long-running Charles Paris mysteries featuring the very likable and somewhat hapless aging stage actor. It is written in the first person, the mystery unfolding through the lips and mind of Charles Paris. The characters are roguish and interesting. The plot takes a number of twists. Charles Paris uses no technology, only conversing with various actors in this ill-fated production of Hamlet. I love the sly humor, the self-deprecating nature of Paris, and the odd-ball cast. The conclusion has a moral ambivalence where a somewhat victimized perpetrator gets a break. Great entertainment and a very compact length, nice for commuters like me!

Charles Paris is back but he hasn't changed

What did you love best about A Decent Interval?

What was one of the most memorable moments of A Decent Interval?

I always enjoy his quotes of reviews of past performances.

Definitely. I have read and enjoyed many of these books in print, but they are well suited to oral presentation and Michael Page does an excellent job.

I would have enjoyed listening to it all at once but my schedule did not allow it. It was good in small segments as the plot was not overly complicated.

I have read most of Simon Brett's books over the years - he is a consistently good writer.

Simon Brett has become a favorite

with so much poor content offered today it is refreshing to have an author who still considers the time and expectations of their constant reader. I enjoyed Michael Page. He is not as good as the cast reading of the BBC productions but unabridged narration is a different animal. A Decent Interval is a solid offering.

This series is theatre based and my son is currently in theatre at school, so I am enjoying hearing the "lingo". Simon Brett is an excellent writer. I also enjoy the reader-properly English. :)

Enjoy this on the go!

Most enjoyable and well read. Good for a journey. The dramatised versions with Bill Nighy are fun but you lose some of the plot with them.