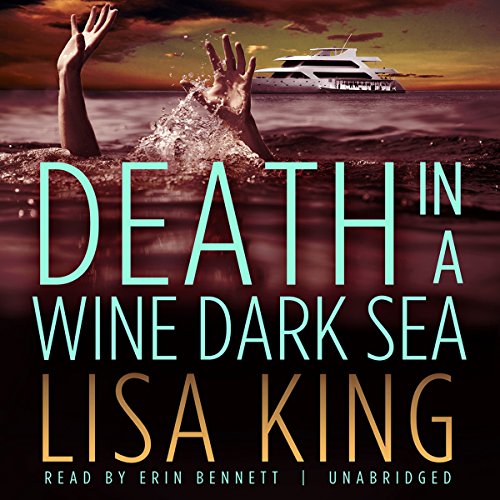 Death in a Wine Dark Sea

Imagine a sophisticated thirty-two-year old Nancy Drew who has a career as a wine magazine writer, is not interested in monogamy, and has the kind of sex appeal only an independent woman can possess. Meet Jean Applequist.

Though she despises the groom, Jean boards an elegant yacht in San Francisco Bay for the wedding of her good friend Diane and wealthy real estate developer Martin Wingo. But things go terribly wrong, the evening ending in tragedy rather than celebration when, after exchanging vows, Wingo disappears into the bay.

Diane asks Jean to investigate Martin’s murder out of fear that the police will uncover too many of his secrets. Jean agrees but discovers it’s not easy to find out who killed a blackmailer and womanizer: the list of potential suspects is long.

Joining forces with the young and geeky Zeppo, Martin’s former assistant, and armed with the details of Martin’s operation, Jean soon finds herself way ahead of the San Francisco homicide detectives - a dangerous place to be.

Jean and Zeppo’s questioning of Martin’s victims elicits strong reactions, from fear to rage to attempted murder, that endanger them both and force Jean to fight for her life - twice.

Lisa King, a UC Berkley graduate, has written for San Francisco magazine and interviewed, among other celebrities, Julia Child. She was Wine Spectator’s first copy editor and wrote a cover story for the magazine on Thomas Jefferson’s love affair with fine wine. She was senior editor of Wine Country Living in Sonoma and is currently a magazine editor in Southern California.

Better Than Most People Think Evidently

This book evidently went over better in my house than anywhere else, given the reviews and the ratings it garnered. I enjoyed the fact that the female lead wasn't the virginal princess portrayed in most of the books available at Audible. Granted some of the complications in this story felt so very contrived; moments when the idiocy of the characters actions was way unrealistic. Then there were the police who came out, not so much as stupid, but as unprofessional. Still it's an exciting well done, well narrated audio that was really enjoyable for most of the eleven plus hours that the audio ran.

Loved every minute of this read!

The characters are well developed and easy to like. Except the ones that are just as easy to hate! Fast moving story with lots of action and a real thrill to read. Highly recommend

The author's political rants ruined it for me. I was very upset that I used a credit for a "liberal" sermon disguised as a mystery. I can watch CNN for free!!!