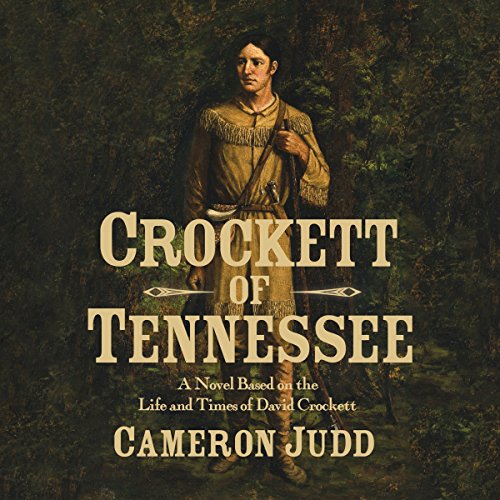 From humble beginnings in rural Tennessee to his heroic death defending the Alamo, frontiersman, adventurer, and politician David Davy Crockett embodies the spirit and ideals of the national character. Even during his lifetime, tales of the sharpshooting, skilled woodsman were - to his delight - told, retold, and elaborated on. As a US congressman, the former Creek War militiaman steadfastly opposed President Andrew Jackson's Indian Removal Act. As a soldier, he made the ultimate sacrifice fighting for an independent Texas. Nearly two centuries after his untimely demise, he remains a legendary figure in American lore. In this fictional account of Crockett's life, author Cameron Judd offers a nuanced portrait of the man behind the myth.

Loved it! I had a long review written out and I accidentally backed out. Don't feel like writing it again.

A wonderful narrator and story of Mr. Crockett

David Crockett, would have laughed and cried right along with me. Very vivid story and narrative! Cameron Judd is a thorough and entertaining writer!!!

This narrator is FANTASTIC!

The story was fine. The subject interesting. The narrator is no mere narrator: he is a voice actor extraordinaire!

Even better than his autobiography

I was very pleasantly surprised and pleased with this story. Cameron Judd truly captured the essence of David (Davy) Crockett in this novel. In fact he seems to have done this story much like Jeff and Michael Shaara have done for the Civil War.

reader was amazing and was able to immerse me into this wonderful story !

I havent heard such annoying character voices since I listened to Game of Thrones. I listen to a lot of biographies, and exaggerated and strange voices do not fit very well in the experience.

Reminds me of Little Big Man.

Disappointed that Mr Tar didn't exist . But a good story. How much was real. Guess I will have to read another book.

Some of the best storytelling you’ve ever heard

You’ll laugh and be tickled by this deep and whimsy look at the life of Crockett. A dramatic interpretation and expansion on the character of Crockett, you will enter with wonder and leave with a best friend in dear ole Davey...

listen ability was fantastic. The narrator was awesome and I will look for more books by him. I didn't really know a whole bunch of about David Crockett and I'm not sure I really learned a lot about him except that he was a political man. Very easy to listen to what I read it again? Possibly but it would only be to hear the narrator's voice.

Annoying narrator using terrible voices to differentiate between characters. Jesus- what have you done. Refund me!