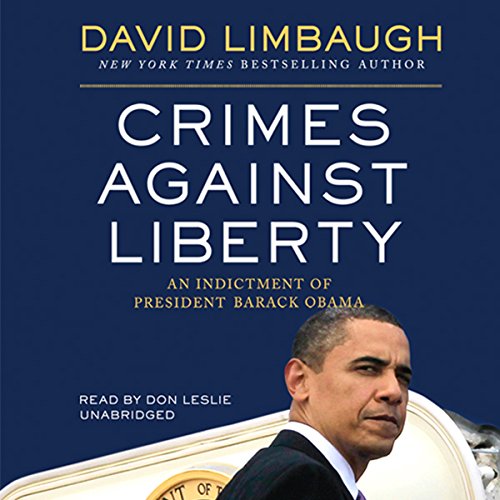 As Americans, liberty is an inalienable right that is granted to us by God, protected by the Constitution, and upheld by our government. Yet, Barack Obama doesn’t seem to share that view. To him, liberty is a threat to the government’s power and something to be squashed by any means possible, as bestselling author David Limbaugh shows to devastating effect in his new book, Crimes Against Liberty.

Limbaugh issues a damning indictment of President Barack Obama for encroaching upon and stripping us of our individual and sovereign rights. Laying out his case like he would a criminal complaint, Limbaugh presents the evidence—count-by-count—against Obama. From exploiting the financial crisis for political gain, to restricting our personal freedoms through invasive healthcare and “green” policies, to endangering America with his feckless diplomacy and reckless dismantlement of our national security systems, Limbaugh proves—beyond a reasonable doubt—that Obama is guilty of crimes against liberty. Comprehensive and compelling, this is Limbaugh’s most powerful book yet.

I am on a journey of learning about the past presidents. Listening and reading positive and negative positions from both sides. I am conservative, some may say way to the right of conservative. Two chapters in and I am completely disgusted with this drivel the author is spilling off these pages. What a bunch of biased bs.

A superb analysis of the failings and unprecedented tactics employed by a naïve President who seeks to attack and vilify his opponents and the very institutions and values that made America the power that it has been.

All the hatred to America is sick crrimmnal in nature will maake one sick for all the racist element to all who get in Obama way of thinking and acting. This book will make you sick to your stomach.

Well documented. David Limbaugh shows beyond a shadow of a doubt that while the Obama administration may seem incompetent, what is really going on is the promised FUNDAMENTAL CHANGE and purposeful destruction of America and our individual liberties.

This is a powerful book and is a must read (listen) for anyone who is concerned about the decline of American exceptionalism, and why things are the way they are with the economy.

It seems everyday we learn something new and unbelievable that is being executed by this administration. David Limbaugh does an outstanding job documenting every aspect of purposeful destruction being done at every level to our country, government and constitution.

What amazes me is the volume of material the author was able to gather - and we are not through the second year of Obama in office! Very timely book, I am going to buy the hard cover for reference.

This book goes through great lengths detailing the sins of Obama and his administration but falls short of its intended message by ignoring any sort of principled message.

I was shocked at Limbaugh's eloquence and articulation. He uses the right language at the right time to clearly convey his thoughts. Rush, while a good speaker, doesn't seem to possess the ability of his brother in mastery of language. An excellent read. Story after story of the administration's attacks on the USA and it's citizens. It keeps a running tally of the mischief and antics of the worse president in USA history.

Obama should be deported.

This is the finest and most explanatory book on the Obama experiment I have read yet.
I would like to see Barack Obama tried for treason!

Fact filled and a page turner!

This author lays it on the line and exposes Obama for what he is... a wannabe dictator with no regard for the Constitution. Anyone that says it is boring may have mistakedly posted a review for some other book in this space or they are an Obamabot...

I devoured the first few chapters of this book in hardback and couldn't wait to hear the narrator's interpretation of the written words. Although the subject interested me, I grew weary of the repetition of a handful of themes and 'proofs.' I felt the narrator wasn't engaged in the material at times--perhaps he didn't believe what he was asked to read. At points in the book where the narrator should be bringing the message home, I felt that he didn't really mean what he was saying. I guess I felt the book received better treatment from the narrator or that the book was thin on things to say leading to tiresome repetition. I'm neither an Obama or Limbaugh fan, but expected better out of this audiobook.