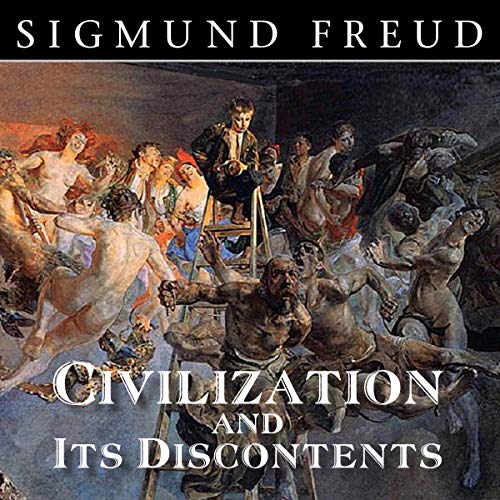 Individual freedom beaten down by societal confirmation is the key theme. Freud argues that the innate drive for sex and aggression dwells in all of us. This is a very approachable read for the non-academician from the great thinker Freud.

Provides a compelling nature of the self

At one time it was wrongly believed that ontogeny recapitulates phylogeny (i.e. the embryonic stages mirrors the development stages of the species). Similarly Freud thinks the phases that an individual goes through mirror the same phases that civilizations have gone through. Freud uses that theme to explain his psychoanalysis in describing individuals and the societies in which they live as mirror images of each other.

Yes, Freud does believe some weird things and he restates them in this book such as the early infant's whole world is the mother's breast and thus we end up fetishizing the breast when we grow up, our time in the womb means we always are looking to return to an abode of some kind, something about the anal fixation and how it never leaves us and unrepressed sex desires lead to our anxieties and other such things that sound weird to our modern ears. But those distractions don't necessarily mean that this book is not highly engaging and worth reading. I'll challenge you to read any recent biography because you''ll almost always see the author slip into Freudian speak (e.g. I'm currently listening to "The Purple Diaries: Mary Astor", and the author says that her father was strict and controlling and that made Mary Astor not trusting of men and unwilling to share her feelings with others particularly men, a very Freudian interruption). It's not a bad way of seeing the world. It's how we understand our selves or others. Now days, we just don't add on the word neurosis or repression, but it's how we cope with the nature within ourselves and others.

I like this book for the same reason I liked Nietzsche's "The Genealogy of Morals". I don't agree with what they are saying, but they provide a narrative that is compelling. Matter of fact, you can tell that Freud is really influenced by Nietzsche within this book. Freud will say something such as the "conscience of the individual gets repudiated by the instinct leading to an anxiety that gives a person guilt" and that leads them to the wanting of taking away of the power of the father. (I don't have the quote exactly, but I think its fairly close to what he was getting at). Nietzsche's "will to power" at it's most basic cries out for how the community takes away our primal instincts, takes us away from "mans instinct to freedom". What Freud does within this book is argues Nietzsche's viewpoint with the emphasis slightly different. Freud states that our conscience gets perturb from within the family and by extension within the community leading away from our authentic (not a Freud word, but I feel comfortable using it here) selves.

As I was listening to this I had to pause to see what year he wrote this book. I noticed it came before Heidegger's "Being in Time". Heidegger had a long section on 'conscience', and seemed to conclude that the conscience is the cause of itself. Freud does a similar thing (if you take his complete statement on the topic within the book and you relate it to the father of the individual as he does or as he does latter on in the book to the sacrifice of the Messiah on the cross, he makes it a complete circle thus giving itself as its own ground (I think)). "Will" is defined as it's own cause by St. Thomas Aquinas thus giving our conscience its primal place in his theology and leading to free will such that God can judge us for our moral acts in a necessary universe but which was contingently created by God exercising His will. Freud is giving us our conscience as a thing in itself and thus we can be blamed for who we are or became (even if we are schizophrenic, autistic, or predisposed to alcoholism by genetics, or whatever).

The conscience leads to guilt because of our repressed neurosis (he'll say). Nietzsche will say the guilt is not real, Heidegger says it is because of the debt we owe to the future because of the one absolute truth we always know (our own impending death), and Freud says we have the guilt always but we repress it thus leading to our neurosis. (I love using that word 'neurosis'. It's totally void of meaning and I think the DSM V doesn't use it at all as a category for that reason). All three are trying to return to us our authenticity which has been taken away from us by civilization (and the family).

Freud lays all of this stuff out in this book. Do I agree with any of it? Not at all. But, there is a narrative that Freud uses that is fun to follow. I liked this short book so much, I'll probably buy "The General Introduction to Psychoanalysis" by Freud that audible offers which I would guess will cover most of this stuff in deeper detail.

The guy has a nice voice but it is recorded very poorly: too much bass in the voice so as to make it hard to listen for an extended period of time and too much room was captured in the recording making his voice reverberant and sometimes difficult to understand. However the text itself was dreadfully boring and filled with technical psychoanalytic jargon that if one is not aware of would not grasp the text at all.

Poor production and execution by reader.

The narrator was difficult to understand and so was Freud's stream of consciousness. At times the audio cut out in mid sentence. Freud does bring some good points in this book but definitely not what I was expecting.

This is, arguably, one of Freud's most accessible and important short works. Laying aside his legendary views on women (which are now refreshingly comical), I'd recommend this work to anyone interested how to deal with suffering and the quest for a good life. Freud lists a few pathways towards happiness, and you will find some aspects about yourself in here. One thing to note, you can get this work and Totem and Taboo for around the same price, so look around.

I like the book, so I have finished it. But I didn't understand quite a lot. Just a little part.
I understood, that there is 2 main motivations: Moving towards benefits and moving away from punishment.

This book is more relevant than ever at this moment. I can not speak for the rest of his works but this is great.

Ideologies brought to the table

Sometimes Freud reaches too far, others not near enough.
Although his other work has been immensely articulate and nuanced, some parts of this one felt half-baked or cast-off--- as though these snippets were found separately and haphazardly fashioned together.
It's painful to critique such a brilliant and disciplined mind, one whose left shoe would remain mostly empty were I to step into it, but this one overall left me with a sense of less than rather than overflowing.
It has some decidedly insightful parts, I must say, but just not to the same degree of his other more robust and flourished works.

the subject matter is interesting but this book is none the less very boring. I think it would've been a lot better if it was written in a more digestible way. it's as if he's only speaking to other experts in his field

After reading this book one may think the world world works in perfect balance. But when I read it one more time, it seemed to me like entropy runs the show. Loved the reader, great voice!

understanding difference between guilt and remorse

A very intuitive book. Helps me to understand the internal personality changes I am experiencing as an adult. Plus the calming and settling of mind I have towards everyday situations.

this book was well written and help me in my sociology ,psychology studies a excellent choice for true understanding of humanity this is a round about where we are now destroying each other we need to become conscious and love each other with compassion and kindness

Shame about the narrator, great book

As above I didn't like the narrator much, I found him distracting and not engaging, I'm British and think I would have preferred a less posh narrator.
That said the book is great and perhaps Mr Freud's best work

I didn't love it

There was some really great points but in critical junctures it was circuitous and tedious. I got a few gems all the same