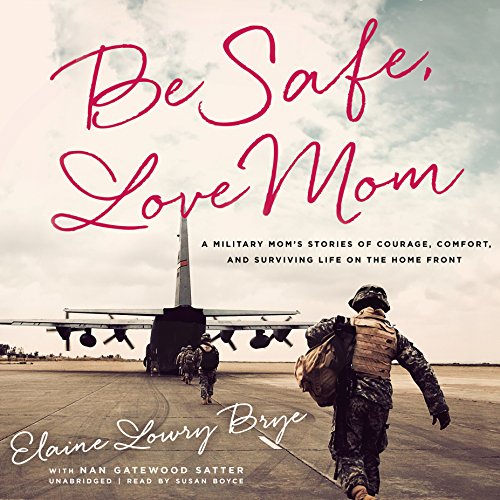 When you enlist in the United States military, you don't just sign yourself up for years of duty - you also commit your loved ones to a life of service all their own.

No one knows this better than Elaine Brye, an army brat turned military wife turned military mom of four officers, each serving in a different branch of the military: air force, army, marine corps, and navy.

Brye's father and mother met while both serving in the US Army, and her childhood was that of a typical army brat, with frequent moves - some to faraway countries - dinner-table conversations full of military lingo, an ever-present anxiety during her father's deployments to Vietnam and elsewhere, and family vacations to national monuments and battlefields. In 1976 - the first year women were accepted in the service academies and ROTC - Brye herself enlisted in the air force, where she would later meet her husband, an air force pilot.

In Be Safe, Love Mom Brye reflects on her family's military service and offers a lifetime's worth of insight, comfort, and wisdom and a bit of humor to fellow military moms who are navigating the unpredictable life that accompanies having a child - or children - in uniform.

Great book! Very informative for those connected to the military.

Too bad the narrator was very robotic.

I am highly disappointed in this audible narrative. As a new military mom, this book came highly recommended by other military mothers. When I seen Audible had it I was delighted as I could listen to it on my commutes. Unfortunately I couldn't get through 10 minutes of this because the narrator was awful! She sounds utterly robotic and it literally sounds like Siri on my cell phone reading me a book. I am out the money on this book as I will have to order it on Kindle or conventional book to truly enjoy it.

Must read!! For us newly and existing military moms!

For us newly military moms this is a must read! Elaine Bruyne goes to the very heart and helps you understand all aspects of being part of a military family! And the support how to let go!

A must read for a new military mom!

This book has brought me great comfort as a new military mom, it has helped my mom heart understand my sons calling

Must read for military moms

Thank you, Elaine for sharing your love and insight for all moms “embracing the suck” and in training. “Semper Gumby”… LOVE IT!!

Reader's voice was too robotic sounding - didn't get through the first chapter - ended up buying the hard copy and reading it myself.

Amazing to the very last chapter.

What a powerful book of encouragement and strength. I cried, I laughed, and nodded my head a lot!

Thank you for your story. For letting all of us know we are not alone.

This book held my hand

I’m so grateful a MoM recommended to me, it helped so much during the time my son was at bootcamp, we have to deal with some kids who accidentally passed away or killed themselves because the couldn’t take it, my heart was shrinking but this book as I said, held my hand, he will be deployed overseas very soon, but this words will keep me going. All my letters end with: be safe, love MoM