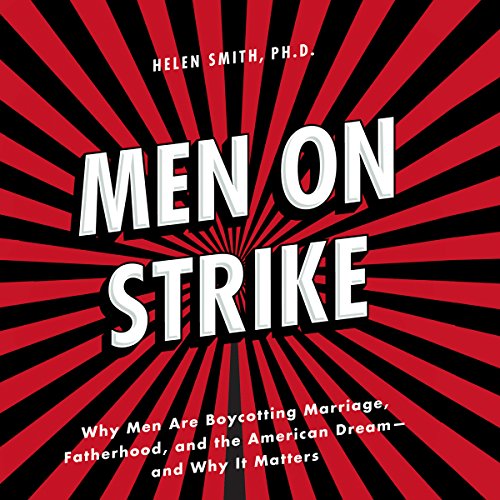 American society has become anti-male. Men are sensing the backlash and are responding. They're dropping out of college, leaving the workforce, and avoiding marriage and fatherhood at alarming rates. The trend is so pronounced that a number of books have been written about this man-child phenomenon, concluding that men have taken a vacation from responsibility. But why should men participate in a system that seems to be increasingly stacked against them?

As Men on Strike demonstrates, men aren't dropping out because they are stuck in arrested development; they are acting rationally in response to the lack of incentives society offers them to be responsible fathers, husbands, and providers. In addition, men are going on strike, either consciously or unconsciously, because they do not want to be injured by the myriad of laws, attitudes, and hostility against them for the crime of happening to be male in the 21st century. Men are starting to fight back. Men on Strike explains their battle cry.

Finally, someone said it!

It might be too late, but this book said it well. Society needs men willing to fight for it.

I intend to talk to my 3 sons in great depth about the choices they make in the future with regards to marriage and children.
The scenarios the author cites are scary.

I started feeling like something was off shortly after I was old enough to vote, at first I thought the world was just screwed up and there was nothing I could do. After seeing the lack of benefits in middle management I found a better paying job that allowed me to “go Galt”. Of course I had no idea that’s what I was doing. As someone who considers himself a libertarian (small ‘L’), I figured Atlas Shrugged was essential to read as it was the book most touted by established libertarian leaders. It was after reading that and discovering objectivism that I realized going “Galt” was exactly what I was doing. This book by Dr. Smith was fantastic in pointing out that, among other things, I’m not alone in this. A highly recommended read!

As an Arab married to a European, I thought the argument and information in the book interesting. It gave me a new insight on Western culture and I think it even helped me understand my wife better.

Dr. Smith nailed it. I have been saying and feeling this way for years and to hear and read a book that shined the light on these issues are amazing. Finally a voice for what is really going on in culture with the family court systems. I have experienced many of the things Dr. Smith uncovered in my divorce some years ago. Thanks for writing this book.

Every man must read

men's issues exist, just not in the feminized female imperative, female centric world, just because men don't complain like women, doesn't mean they have a ton of issues.

Justice and liberty for all

This topic is important! There's supposed to be justice and fairness for all. Feminism fought for that, but just for women. Men have helped with women's rights, and it's wonderful to see a woman helping with men's rights. This is not about furthering anyone's priveleage. This is about basic fairness and the rights that go with true egalitarianism! Egalitarianism was the goal of Feminism right? We're not there yet, we've left men behind, and it's time to keep that promise, if not with Feminism, then by some other means, but it MUST happen.

Amazing book! Great insight! I love the way the author explains everything every one should understand.

Great read for everyone

The author has many great points on our society today. A lot of these things are right in our faces but we often overlook them.

This is the first book I’ve read that I could relate to and felt it expressed my own thoughts and feeling about the reason I refuse to date marry or have children. It also is the first time ive heard of organizations set up to advise and help men in a political climate that seems to be against our very existence.

Hugely thought provoking and timely. Dr Smith sensibly demonstrates what most men have suspected for years - that men are under attack in today's society . she points out how it has become acceptable to engage in anti-male rhetoric and actions which would never be tolerated against women. She illustrates convincingly and frighteningly how men are withdrawing from relationships, marriage and society's skewed expectations as they see no point in fighting a losing battle.

Dr Smith does, however, give real life examples of how men have challenged and fought back and she gives a certain hope for the future - or at least indicated how a turning point could be established.

This book should be mandatory in schools

Just amazing thank you Helen for our book I will make sure to teach my son of things you mentioned in a book to protect him from this rigged system.