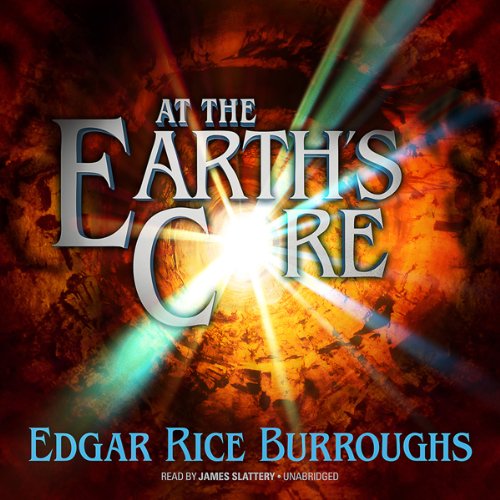 When David Innes and his inventor friend pierced the crust of the Earth in their new burrowing device, they broke out into a strange new inner world of eternal daylight - a world in back of the Stone Age, where prehistoric monsters still lived, and cave men and women battled against cruel, inhuman masters.
The story of what these two men did in that new world of Pellucidar makes At the Earth's Core one of Burrough's most outstanding best sellers.
(P)1996 by Blackstone Audiobooks

A short entertaining book, but a little dated.

The reader is perfect for the book. This is the first book in the Pellucidar Series of stories about David Innes exploring a subterranean world of prehistoric creatures where highly intelligent reptiles are the dominant species and prehistoric men are much lower on the social scale. The story is obviously more fantasy than science fiction. The story was written in 1914 by the author Tarzan the Ape Man and the author is enamored with Darwin?s relatively new theory of evolution, so you will hear the narrator speak at length about the state of our knowledge of evolutionary theory just after the turn of the century. We?ve come a long way in our scientific understanding since then. Edgar Rice Burroughs? has a military background so pacifists and environmentalists won?t be happy with some aspects of any of his stories, but the hero in this story arrives in this new world without a gun, limiting the mayhem. The book is a light enjoyable read and I recommend it without reservation.

So Good, A must hear!

Exciting moments throughout, couldn't wait to hear the next chapter

Burroughs fans will enjoy this

A very entertaining adventure and first in the Pellucidar series - similar to the Caspak series.

One thing puzzles me: The store has got two versions of this book but no sequels?