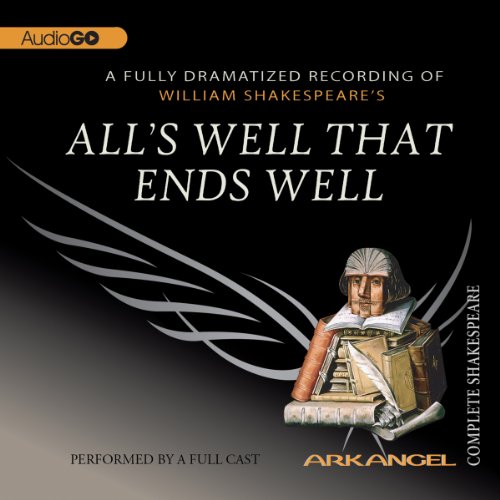 The young and virtuous physician's daughter Helena desperately loves Count Bertram, but he regards her as beneath his notice. When Helena cures the king of France of a mortal illness, he rewards her with Bertram's hand, but before their marriage can be consummated the count flees. To win her husband back again, Helena forms a daring and resourceful plan. A plot to unmask the strutting soldier Parolles makes up another strand in this sometimes disturbing comedy of deception and disguise.

The most clearly problematic of Shakespeare's &quot;Problem Plays&quot; . Don't get me wrong. I love the dark, ambiguous, almost nihilistically modern tone of this period of Shakespeare. I think the peak of the three plays is clearly 1st: Measure for Measure, followed by 2nd: Troilus and Cressida, and 3rd: lastly, this.

To b@stardize a line from Shakespeare's M4M to fit my cause and purpose:

&quot;They say, best men plays are moulded out of faults,
And, for the most, become much more the better
For being a little bad.&quot;

Anyway, one of the redemptions of All's Well is Shakespeare is playing us and not just the players. He KNOWS audiences want resolution. He KNOWS it pays to let the boy get the girl. Hell, movies today show we are no different. We don't want ambiguity too much. We want a hero who gets the girl. Shakespeare says fine. I'll give you a nominal hero (who in reality is a real dick) and feed him (per request) to the girl. She will get what she wants (in the end) and the audience will get what they essentially keep demanding (in the end). And the result will be bitter. To again paraphrase H.L. Mencken who was talking about voters and democracy, fits also for theatre patrons. Shakespeare knows &quot;that the common people know what they want, and deserve to get it good and hard.&quot; It is all very modern of Shakespeare and also very human. Just not humane.

One more point about this play. I adore Parolles. He isn't nearly as perfect as Iago later will be, but like Lucio from M4M and Thersites in T&amp;C carries some of the best lines in the play.

Some of my favorite lines (just a brief sample):

― “Moderate lamentation is the right of the dead,
excessive grief the enemy to the living.” (Act 1, Scene 1).

― “my idolatrous fancy Must sanctify his reliques.&quot; (Act 1, Scene 1).

― “Hence is it that we make trifles of terrors,
ensconcing ourselves into seeming knowledge when
we should submit ourselves to an unknown fear.&quot; (Act 2, Scene 3).

The subjugation of women in Shakespeare is clear as day in the play, and I generally am not one to take that critical approach. Let's just say Helena and Bertram's marriage is not going to last.

The performances are excellent throughout. The speech is beautifully rendered. The meaning clearly spoken in every case, and even at times offering the variable other possibilities of meaning. I recommend reading the play at the same time you listen to it. Both the recording and Shakespeare's text will provide rewards. About the play: You will find the first half tightly constructed, engaging, and exciting. Helena is a wonderful character and her choices and actions are thoughtful. Unfortunately, the second half of the play does not answer the brilliance of the first. Only when the concentration of events returns to Helena does the play regain it's momentum. The closing scenes almost bring the play back to its strengths. This play is definitely double or triple worth the time it takes to listen to while you read and enjoy.

The play is quick and straight forward. As always the performance of the Arkangel production is unmatched.