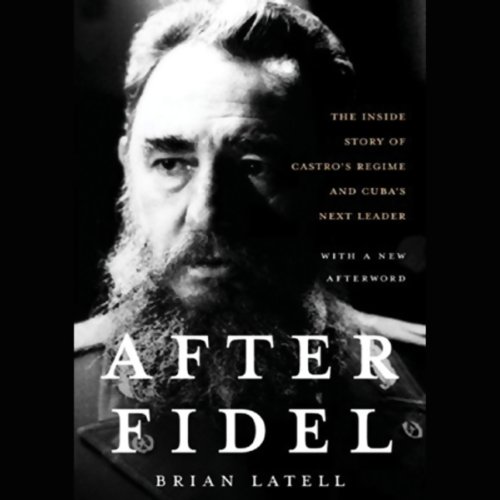 In this compelling, behind-the-scenes account, former top CIA officer and Cuba expert Brian Latell examines the extraordinary Castro brothers and the impending dynastic succession of Fidel's younger brother, Raul. Exploring the brothers' remarkable relationship, he reveals how Fidel and Raul have collaborated, divided responsibilities, and resolved disagreements for more than 46 years, a challenge to the notion that the little-known Raul has been an insignificant player. The result is an intimate portrait of two enigmatic men and a new understanding of the psychology and motivation behind their actions. Based on his insider knowledge of Raul, Latell projects what kind of leader he will be and how the shift in power might influence U.S.-Cuban relations.
©2005 Brian Latell (P)2006 Blackstone Audio Inc.
Storia e teoria Relazioni internazionali Politica e governo Politici Presidenti e capi di stato Mondiale Americhe America Latina
Mostra di più Mostra meno

"[T]hose hungry for a greater understanding of Fidel's character and the complicated relationship between the Castro brothers will find priceless nuggets here." (Publishers Weekly)
"Few Americans understand Cuba, past, present, and future, better than Brian Latell. He has combined an old CIA hand's knowledge and insights with a clear, readable writer's touch to bring both Castros, Fidel and his enigmatic brother Raul, to life." (Newsweek) "Latell dispels many of the fallacies, myths, and legends about Fidel....Since existing biographical information on Raul Castro is sparse and scattered, the book takes on added value in bringing such material together....[A] readable narrative and an excellent addition to the growing literature on Cuba. Highly recommended." (Library Journal)

Every American should listen to this audio book. The author does a great job of explaining the Castor brothers from their childhood to current positions as world leaders. Well written and well read by the narrator.

Will Fidel Castro Be The Last Man Standing?

The author, Brian Latell, does a fabulous job in telling the journey of Fidel Castro from an upstart rebel to a revolutionary figure who dared take a stand against the powerful neighbor to the north in the United States. Who would have thought that he would outlast US Presidents and other world leaders throughout the last 50 years!

The Bay of Pigs, the Kennedy's, the heated rhetoric between the two neighboring countries of the US and Cuba, this dynamic has been in place for the last couple of generations.

Although he is in the twilight of his life and the curtain is closing quickly, he is still a figure and personality to be dealt with. Even though he has passed the daily powers of running Cuba on to his "not much younger" brother, Raul, several years ago, Fidel is still the person who we all readily attach to Cuba and it has been that way for half a century.

Things will change in a hurry (if not drastically) when the Castro Brother exit from the world stage, question is, how will the United States react and behave when the inevitable happens to the Castro Brothers and Cuba is under new leadership.

Hugo Chavez from Venezuela, just left this world recently, so things are always changing and the United States has to be ready.

Cuba's Going To Be Changin'

I really enjoyed this book and found it gave a lot of historical overview as well as a good peek at what's to come. I feel for the Cuban people in that there will be so much catching up for them to do in order to come into the modern world of things.

Written by a CIA analyst - Question of bias

This is an unsympathetic, historical overview of the Castro brothers written by a CIA analyst. I was embarrassingly short on information before reading this book. And this was a great place to start my education. Now I am very interested in reading something written from the perspective of the native Cuban. This is an enjoyable and informative read. And the performance is superb. Dropped a star for invective language that made question the agenda of the author.

This is a great, entertaining read on the infamous Cuban leaders who have become iconic in Latin America. The author takes you on a historical ride along side both castros as the go into the mountains, through their triumph, to the potential for the future. Recommend for those with an interest in Latin America.

Tremendous insight and well written. Learned so much about the evolution of Cuba and it’s dictatorship. To bad such a confused misguided group tore lives apart and ruined a country. The Mafia at its best. A reign of terror by thugs.

BIASED AND ONE SIDED

Cuba is a fascinating country and the Castro brothers are very worthy of a book which objectively analyses what they have done in Cuba and elsewhere. Since 1958 when they overthrew the Batista regime (which had American backing) the Cuban government and people have achieved many things, e.g. free education for all (regardless of age or what is studied), virtually 100% literacy rates, a higher doctor to patient ratio than any western/developed country, it is a tropical country where tropical diseases have been eradicated. Nothing positive whatsoever gets a mention from the author. i could mention the fact that Fidel kicked out the mafia soon after taking power, the extremes of rich and poor in countries like America and more.

What could Brian Latell have done to make this a more enjoyable book for you?

He was a CIA agent, specialising in Cuba and its leaders. Perhaps predictably, all he has done is toe the CIA/USA line - "Cuba is communist so it must be bad". For example, he talks about what Cuba sending soldiers to other countries to fight governments and encourage revolution, the fact that for many years Cuba sent thousands of doctors to many poorer countries and disaster zones around the worked merits less than a sentence. May I also point out that one of the governments that Cuban soldiers fought against was the evil and apartheid South African government.

Nothing. But I don't blame him. He's just reading the author's words.

Save your money. Buy, for example, The Motor Cycle Diaries and find out why revolution was deemed necessary and the dreadful conditions of the working class/poor in South America then (and perhaps now). I'm no communist but I am capable of being objective, unlike the author. I might even ask for my money back on this book.

A bit dated but good

Published in 2005, before Fidel stepped aside for Raul, the book provides an interesting portrait of the brothers and their relationship. It also provides some interesting insight into the work of US intelligence. The book assumes a basic knowledge of recent Cuban history.

Authoritative yet Biased as expected

Can’t rely on CIA man to be fair, super biased American sentiments of historic facts.
High volume of the details may be real and accurate but twisted beyond reason to demonize the Cuban revolution while failing to condemn American foreign policy and imperialism