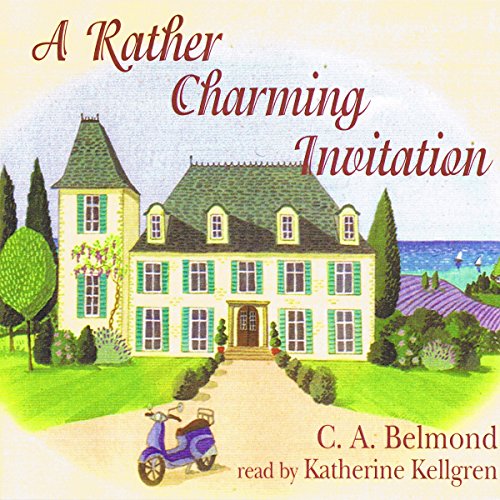 You're invited! Bride's or groom's side?

Dateline: London, Paris, Antibes. It's time to get down to nuptial nuts and bolts. But while heiress Penny's distant relatives insist that the wedding be held in their native France, Jeremy's kin won't have it anywhere but England. And either choice might just re-ignite the Hundred Year's War.

Then, in a family château high above the perfume fields of Grasse, Penny's French cousin offers her the loan of an ancient bridal tapestry. But Penny has barely begun to crack its perplexing imagery before a series of strange events unfolds, threatening to derail the wedding. From a secret chalet on Lake Geneva, to a nostalgic stop at the opulent Train Bleu, to a winner-take-all gamble in Monte Carlo, Penny and Jeremy are off on another romp...while the clock is ticking down until they say, "I do."

Best of this series

I read this author's books for the genre. While her plots, I think, tend to be too long, I felt less so about this one -- book 3 of the series -- owing to more interesting characters and cultural references. All in all, worth a credit for good company.

I have actually read, and re-read this delightful series of books and cannot wait for C.A. Belmond to write more.

In this book (as well as the other two of the series), she includes a little adventure, a little romance, and tops it all off with exquisite locales!

I loved this book!

This is the 3rd in CA Belmond's series and I found it inventive and captivating. It is expertly woven together and isn't predictable! Just when you think you've got it, she throws in a twist. I love the varied characters, the family relationships and am especially delighted that she is the rare author who doesn't seem to need to add sex scenes into the stories, yet fills them with adorable romantic interludes. She leaves much to the imagination. I love a non-conformist! I truly enjoy her descriptions of London and the South of France. The historical detail is well researched and accurate. If you love Europe I hope you are as enchanted by these stories as I am. Please keep up the series! I got the first three on Audible. I finished "Invitation" this morning and immediately downloaded "Picasso", which is her stand-alone work. I can't wait for the 4th book in the series, "Homecoming", to come out on audio so I ordered the book today as well.

I like this series for its pallet cleansing properties! It’s light, enjoyable, and consistently amuses me all while providing a sort of literary break from longer heavier books.

The main plot in this story was a little slow to get moving – it starts about half way in – but I didn’t mind all the filler at the start one bit. I like just “hanging out” with Penny and Jeremy; they are entertaining in their own right.

It hurts me to give Katherine Kellgren anything less than 5 stars as I usually find her work excellent, but in zziss case-uh her mizayrable Fronch accent-uh wazzz too much-uh too take-uh. UGH. I can’t tell you how much “clownish French” grates on my nerves!!!

This huge complaint aside, I loved it. I hope Book 4 comes out in Audible Format soon.

Where is the next in the series? Hope these 3 aren't all that there is!

The Penny and Jeramy series harkens me back to my days of immersion in Nancy Drew novels. But they are definitely grownup novels. Charming settings, fun plot twists and likable characters whose witty banter and intelligence kept me engaged. I hope C. A. Belmond continues their adventures in ore sequels.

Hard to figure out the correct order at first, but worth it. I was entertained by this sweet story of a couple and the mysteries they solve. Slow at times but makes sense in the end.

A rather enchanting series!

After listening to the first three books of this series I have to say that they are charming, lovely, beautiful, enchanting - and more! They're filled with romance and mystery, and the romance comes from more than just the main couple, Penny & Jeremy; it comes from the beautiful prose describing the surroundings - the locales, food, clothes, decor, and people. These books are a wonderful, fun, escape from reality - the kind of book that brings you into another world completely. Of course, Katherine Kellgren's narration is superb (she's my favorite of all time & it's well deserved)!

I listen to a lot of British theme books from a variety of historical periods. What truly draws me to this series is the scenery and idea of living in both England and France. Penny's love of history and imagining how aristocrats traveled in the past is spot on.

My Go To Book

I can't even tell you how many times I've listened this book, the whole series really. I leave them on my phone and when ever I'm waiting in a doctor's office or in most any line, need a pleasant companion on a trip or just can't sleep at night, I reach for this series. This "Rather Charming Invitation", is my favorite book in the series, as the characters have been perfected. I was sad to hear that Katherine Kellgren passed away and the last of the series may not come out as an audio book. No one could match her, but I'd like to have the final installment as an audio book.