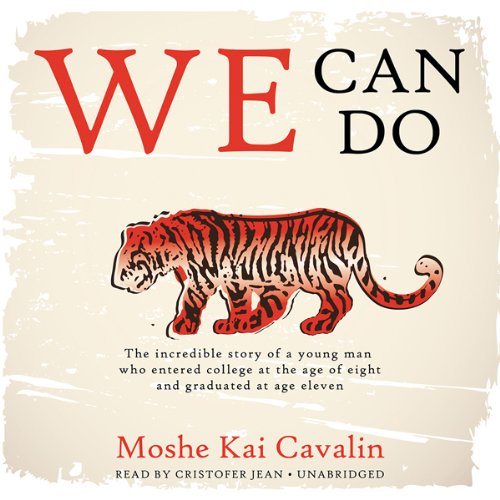 Moshe Kai Cavalin entered college at eight and graduated at the tender young age of eleven. Throughout We Can Do, Moshe Kai emphasizes that he is not a genius and that any youngster - with good planning, a strong heart, hard work, and a resilient mind - can succeed beyond any expectations. Cavalin tells listeners, “I was able to reach the moon, but others can reach beyond the Milky Way.”

This memoir recounts his incredible story, including his parents’ contribution, his strategy, the method of study that led to his stellar accomplishments at such a young age, and the promise of more to come. Also included is his code of conduct, along with his list of dos and don’ts, his advice on how to finish school more quickly, and what he sees for the future.

Cosa pensano gli ascoltatori di We Can Do

Wish that everyone who has a kid read this book

Moshe entered college at 8 years old. He is mature, has a great view of the world, follow rules, praise his parents and is humble. Wow, who is this guy. He says that he is not a genius, just a hard working teen (now he is 14).
Great book.
Great narrator.
Wish the best for him (who knows he will be the US president with 40). The slogan is right there-> we can do (it)