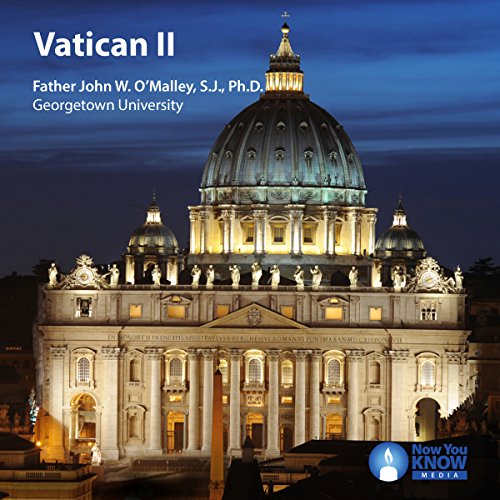 Join celebrated Church historian John O'Malley in exploring the biggest meeting in the history of the world.

The Second Vatican Council concluded 50 years ago, but it is a livelier topic today than it has been for decades. Basic questions are being asked. What did the Council do? Was it properly implemented? Are its decisions being systematically "rolled back"?

Good questions, but to answer them good information is needed. Such information is precisely what these 12 insightful lectures provide. You will discover the story of the Council from its convocation by Pope John XXIII in 1959 to its conclusion in 1965. They reveal a dramatic clash between a large majority (85% to 90%) and a small but determined minority. Why did these two groups take their positions so passionately, who were their protagonists, and how did Pope John XXIII and Pope Paul VI respond?

Explore the issues that rocked the Council. How should the Church deal with non-Christian religions, such as Islam? What is the true nature of the liturgy? How is the Church to deal with the "new churches" emerging in Africa and Asia? Is freedom to choose one's religion compatible with Catholicism? Is there any limit to the authority of the Roman Curia? Why did Pope Paul VI remove certain topics from the agenda?

These lectures will give you the orientation you need to understand one of the most important events of the 20th century, to appreciate the problems it faced, and to grapple with the questions being asked about it (and the Catholic Church) today.

A Second and Much Different Council

AT A GLANCE:
An eminent Catholic historian shows his mastery of controversial subject matter.

CONTENT:
There are many competing stories about “what happened at Vatican II”. Luckily the man who wrote the book by that name is here to help us make sense of things.
The lectures are presented as a story told chronologically. We learn about the calling and intentions of Pope John XXIII, compared subtly with Paul VI’s strategy of intervention. This is an intimate and systematic look at the driving participants, the composition and presentation of key documents, and the infighting of competing groups from around the Catholic sphere. There is very little focus on the relevant doctrine and this is at times frustrating; we are told one too many times that “we don’t have time to go into that now”. Expect a straight history lesson and you will be rewarded.

THE NARRATOR:
Professor O’Malley is an esteemed Jesuit author who had firsthand access to the council as a journalist. He has devoted much time and care to this series and gives the impression of being a trustworthy source. His tone of voice occasionally hints at his opinion but he stays consistently on-topic. His speaking tempo picks up and slows without warning, making it a dangerous business to deviate the playback speed from normal.

OVERALL:
Greatly recommended for Catholics and Church history buffs seeking an objective overview of the events during Vatican II.

The author provides an overview of the inside baseball that went on at Vatican II in the drafting of the council’s texts. The author provides an easy to understand and conversational tone, and he clearly is an expert. To some extent, I wish this survey could have been more detailed, but he has a book that does that, apparently.