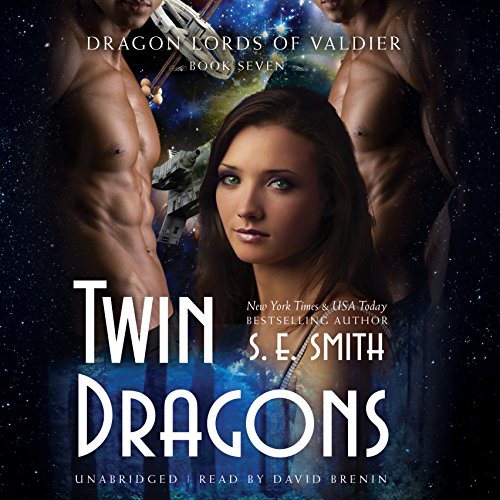 Calo and Cree Aryeh are twin brothers and a rare species of dragon known for their fierceness in battle. The brothers know they will never be able to have a true mate of their own. Never in the history of their clan have twin dragons been able to find a mate capable of handling two male dragons.

The twin dragons are confused when two humans are discovered in an abandoned asteroid mine. The old man and his grandson appear normal enough, but their dragons are driving them crazy, insisting the boy is their true mate. Things become clearer when they discover Mel is really Melina, but she refuses to have anything to do with either of them, and she is determined to return home. Can they convince her to give them a chance at happiness?

Not exactly the book I wanted...

This is one of those side stories that popped up through the series. Having those brooding twins meet their match was fun to see in Carmen's book. We had just enough hints to see things coming. It was interesting seeing those same events from the inside with this book. It did make a few things in the beginning seem to go slower. I just wanted to fast forward to the moment they knew she was a girl and what happened after.

There are no major twist in this book, it is more about the trio than any serious plot drama. Most of the big bad stuff was resolved and not really a part of this story. There is another conflict presented by the nature of them as twin dragons. Apparently, twin dragons never have found a true mate, so things do get dramatic at the end.

It takes awhile for the steam to happen, especially because for a large chunk of the book they thought she was a boy. Once that is dissolved, the spark happens quickly. They are seriously hawt details!! It is super fast for things happening. It is a very spicy book in the end.

I liked this book, but it wasn't a favorite in the series. I just kept waiting for something to happen. Once things did get exciting, it just wasn't enough for me. I would have liked the recap portion to have been quicker and more of their time on Earth as well as them coming home to the village.

As always the narration was a highlight, David Brenin is one of my ear crushes!! I just cannot get enough of his delicious reads!! He has a splendid pace that brings the action to life in delightful ways! I want him to read to me nightly!!

There are still a couple more side books in this series, then the stories of the other planet's princes. I love that this creates such a full world with so much potential!! The connections of the stories is a fascinating puzzle to unravel.

Waste of my time!

I enjoyed all of the other Dragon Lords books but this one wasn't very good. By the time it was over, I disliked all three of the main characters. S. E. Smith didn't put much effort into this story. I am returning this one, even if it did cost only $2.99.

O.K. first of all the twin dragons did NOT kidnap the young girl. Some other aliens kidnapped a young female & her grandfather from earth to be slaves. Her grandfather hides the fact that she was a female to keep her safe. She grew up 6 years away from earth as a young boy the "wasn't right in the head". The pair get rescued but, chances of getting back to earth are complicated when the twin dragon brothers meet the "boy' and find that they are strongly attracted to "him" this story has some sad situtations and bizarre events that keep the reader/listener scratching their head. It was the typical struggle of alpha male/males controling their female to bend to their wishes. I felt sorry for the young lead female. She lost soooo much and then when she though she might get her life back. Uncontrollable forces push her into another life. Her childhood is robbed & innocents lost. Perhaps losing her roots & family made room for new ones.. We hope.

This book was so hard to get through. The lead female character was helpless and a bit of a ditz. The constant ridiculous lack of communication and misunderstandings through this entire book was infuriating. The lead female flees and takes a nap while her mates are in life or death trouble. The book was filled with random scenes that never truly connected...the only tolerable part was the narrator. I am so disappointed

This was so sexy! I really loved this book. All of these books are so great! Just another one to have so much fun with 🥰

I was so worried about the twins and cheered when Mel came to the rescue. She showed courage throughout the story. Thank you for such a different twist and I can't wait for all the books to go audio.

simple and pleasent and a prime example of......

I like the Author's imagination. it is fun. Over all this book is entertaining up to a degree. The description of this world and the interactions between characters are simplistic in nature.. I feel like this world of dragon shifters is young and lacks the richness of a full bodied well rounded story that leaves the reader fully satisfied in having been immersed , not just dipped, in the whole experiance. It's a book I would listen to only once,having fast forwarded a time or two. Not a book I would read again and again. The Narrator is good but some female voices sound a little off to me, and perhaps best described as weak. The male voices are really good. At times I wanted to shake the females and offer them a cup of strong coffee without any sugar. Too soft. Too much breathe. This also caused me to fast forward a time or two.
I do Keep in mind that simple can be good sometimes. Happy reading.

I have enjoyed this series and would recommend it. The dragons are very sexy shifters and the women of Earth are kick a$$ females ready to tame their shifters.

I feel like I've fallen in love with these two men

I have shivers through most of this and in the ebst way possible. Hot and intense romance with amazing descriptions of the more...intense...scenes. There were parts I literally hard to laugh out laugh, some were I couldn't help but smile a happy warm smile (who knew a threesome couple could be see warm and inviting and safe feeling??) and there were a few scenes that brought tears to my eyes. so many emotions in the story... I love, absolutely love how the story in this book was basically stand alone, so no confusion, and the characters...I am at a loss for words. this was not what i was expecting, it was ten times better. I normally remove stories after reading them, but not this one. I'll be listening to it again! the narrator was awesome as well, but I didn't like his Georgian accent for the female lead. It gets better as he goes though, so stick with it. it will be frustrating at the very beginning but stick. with. it. I promise, this book is worth it. I finished it in less than a day, most of it within a single sitting because I was so hooked. Please, please read this. its so worth it.

I hope you have ALOT of butter for all the corn

I think the writer was channeling their inner 13 year old. It was so corny and sickeningly sweet I had a really hard time finishing it. That's if you can get past the multiple references of farting, poop, and pee in the beginning of the book. The male characters were draconic versions of neanderthals. They literally knocked out the heroine and dragged her to their cave and she STAYED. UGH! The narrator is a BIG fan of southern breathy accents that were annoying to listen to for almost all the women. Having been born and raised in the state of TEXAS I can honestly say he needs to cut it out. He had a thicker accent when portraying the women then I DID. Another UGH! This was my first AND LAST attempt at reading anything from this writer. If all the books are like this...I'll pass. *shudder*

I thoroughly enjoyed this book, the story of the twins finding and finally claiming their mate was very well thought out and written. The story of Melina's rescue and her finding love with the twins was very moving and brought tears too my eyes I loved every bit of it

Overall about as enjoyable as the rest of the series but the last chapter is really stupid and spoilt the book for me.

An ohh so advanced race with space travel etc are willing to execute 2 men on the word of ONE spoiled youth. All without any kind of trial or evidence, stupid.

follow thay with a female who flew away to save herself as she watched her mates being captured and then hid away. Whilst hiding, the author then padded the story with nonsense hyperboly. When she eventually helps, she uses a SHOVEL, daft.

Would you try another book written by S. E. Smith or narrated by David Brenin?

What could S. E. Smith have done to make this a more enjoyable book for you?

Yes, I could turn it off.

Might float some peoples boats, but my boat sank without trace. To be fair it just wasn't my cup of tea.