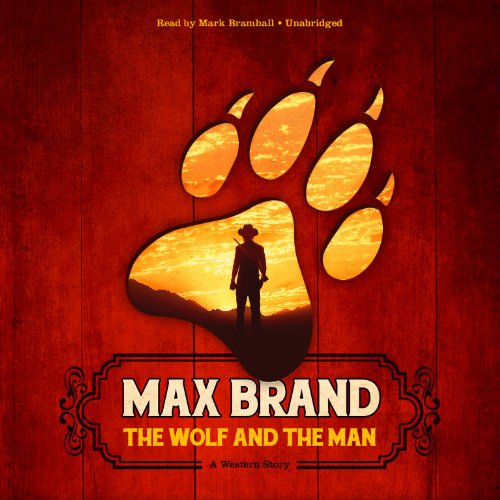 The attacks of the huge lobo Gray Cloud have caused the remarkable price of $2,500 to be put on his head. And it falls to big Dave Reagan, considered little better than a half-wit in that part of the range, to discover the monster held fast in two of his traps.

Something in the fearless animal's eyes keeps young Dave from killing the wolf. Instead Dave releases Gray Cloud, who is unable to walk, and rescues him from a prairie fire that threatens them both. Dave brings Gray Cloud home and chains him in a shed that he uses as a blacksmith shop. Dave expects now that, as a result of this feat, his cousins will finally come to respect him. But as far as they are concerned, this is the time to put a bulletin Gray Cloud, cut off his paws and head fur, and claim the $2,500 reward.

What they didn't anticipate is that Dave would object to their plan. Dave escapes with Gray Cloud into the wilderness, and it is there that the two become indelibly attached. It was an error, however, for Dave to think that men would not intrude on them. Before long both Dave and Gray Cloud are fugitives, having to protect each other as they attempt to elude their pursuers.

Cosa pensano gli ascoltatori di The Wolf and the Man

A Story about a Simple Minded Man Full of Wisdom

One of my pet peeves is when smart people make obviously stupid choices in books. This book is about a simple minded man who is the wisest person in the book. He is lovable and heroic and made me cheer for him. I had no idea this book was written in 1933 as it is timeless. An easy read that will leave you feeling good.

...and then there is Mark Bramhall who is one of my favorite narrators and even better in the western genre. He does not disappoint.

What does Mark Bramhall bring to the story that you wouldn’t experience if you just read the book?

His usual brilliant reading -- Mark Bramhall can do no wrong; he is clearly one of the best. I now look for books that he's reading, even if I haven't heard of the author...

It's kinda Bubba Gump meets Grapes of Wrath meets Call of the Wild. Very entertaining, from the endearing main character to the fight scenes to the morality play. At times it's a little hokey by modern standards (The Indians said "How") but that's part of the charm. It's a breath of fresh air in our crazy modern world.

I loved this story. The narrator is wonderful for the context. I couldn’t put it away.

This book, written over 85 yrs ago, had me spellbound from the beginning. Rich cannot begin to describe the authors writing and storytelling. I'm a fan for life. bravo the the narrator too, there is none better.

l could not see how anyone would not totally enjoy reading or listening to this book period.

reader does a great job with the voices. Enjoyed the story very much. good ending

The Wolf and the Man

Another excellent book by Max Brand. The narrator, Mark Bramhall, is superb in the reading of this story. His voice changes with each character catching their personalities extremely well.
Definitely recommend this book.

Another Hit for Max Brand and Narrator Mark Bramhall!

Every moment of listening made it difficult to stop the book at all. Hated that it ended and wanted more. Wonderful story of a great and honest man that was tortured by the greed of other humans and their ignorance of kind people as this man... This world needs more kindness towards all people.

I downloaded this book from the freebie listen list. I was surprised as to how good this e-book really was. Excellent performance and a very intriguing tale of a simple man with a big heart and a wolf who was just big. This is the second Max Brand offering I have listened too but now I am hooked. If you enjoy the western genre, download and listen, you will not be disappointed.

Awesome story and I life with wolves.

Anything wolf themed I look for, I live with wolves and I'm devoted to them, so when I saw this book I was unsure about the western side of it.... omg... I'm so glad I gave it a chance, what a really REALLY good story on how a man and a wolf became best of friends and the adventures they have together....
100% recommended....... enjoy