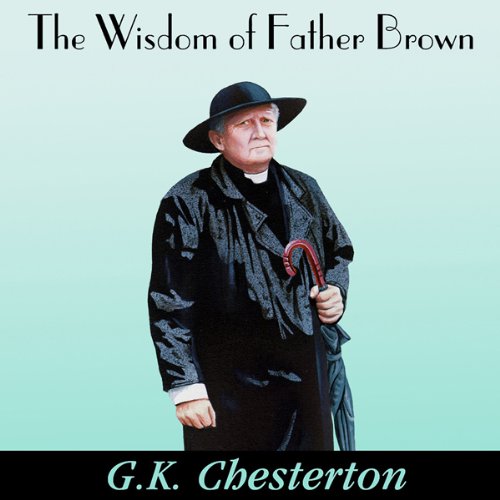 The Wisdom of Father Brown

G. K. Chesterton’s Father Brown is perhaps the most lovable amateur detective ever created. This short, shabby priest with his cherubic, round face attracts situations that baffle everyone - except Father Brown and his rather naïve wisdom.

The twelve enthralling stories in this book take Father Brown from London to Cornwall, from Italy to France, as he gets involved with bandits, treason, murder, curses, and an American crime-detection machine. And every problem he comes up against he solves with a simplicity of argument that leaves the other characters wondering, “Why didn’t I think of that?”

There are those for whom everything G. K. Chesterton said or wrote is worth quoting--especially in an argument. I know because I used to be one of them. Having let my conversion to Catholicism sink in over the course of a dozen years, I've mellowed somewhat but I still enjoy Chesterton immensely. In fact, being able to approach him with less reverence makes his work much more enjoyable.

As mystery stories these are entertaining enough--though many in this collection and others turn on double identities, so much so that after a while the listener starts expecting them. And while I always enjoy Chesterton's prose style, bristling as it does with insights that range from the merely descriptive to the deeply social, religious and psychological, it can sometimes become too noticeable and slide into apparent affectation. Finally, his characters have a bad way of slipping into his prose style whenever they attempt to describe or narrate (see the girl's bit of autobiography in "The Head of Caesar").

Chesterton's irreverent attitude toward everything his age held (and ours holds) in such high reverence--machinery, technology, psychology, science--and his quiet, persistent reminders that the truth never changes, no matter how much we believe we have, are worth the price of admission every time. While the mysteries are intriguing enough, the commentary they provoke are what really matter:

"What we all dread most," said the priest in a low voice, "is a maze with no centre. That is why atheism is only a nightmare."

"But he died penitent—he just died of being penitent. He couldn't bear what he'd done."

For the whole air was dense with the morbidity of blackmail, which is the most morbid of human things, because it is a crime concealing a crime; a black plaster on a blacker wound.

"There's a disadvantage in a stick pointing straight," answered the other. "What is it? Why, the other end of the stick always points the opposite way."

And Frederick Davidson is the perfect reader to deliver stuff like this.

Sherlock Holmes asserted a detective should never reveal his methods. But Father Brown is a detective with no method other than his grounding in ultimate truth that permits him to see things as they actually are. And that's a mystery that can be more satisfying than the best who-done-it.

gotta love Father Brown. Quaint, down home earthy, and astutely observant.
each chapter is a joy. fun times right here and the book is done too soon

I tried to overlook the racism, really. But it was just spoiled for me. In any case the plots were very contrived. I prefer the TV show.

Loved it, makes you think

You have to pay close attention every minute to even come close in a guess at what happened, and even then you still won't get it right 90% of the time.

Chesterton's Father Brown stories are all clever and entertaining, yet rife with wisdom. However, the narrator of this edition is problematic.
While his aristocratic English accent is novel and delightfully droll at first, it soon becomes a tedious distraction. His cadences are repetitive, droning on like a bad musical, and his inflections are oddly, even wrongly placed, often making sentence syntax confounding.
Also, his volume trails off at the end of many sentences, so that the listener is forced to rewind several times before giving up on comprehending the full meaning of the sentence.
All this has a somatic, almost hypnotic effect, so that the listener inevitably forgets to listen, attention trailing off into tangential thoughts and daydreams.
In short, it's not an attention grabber.
In all fairness to this narrator, he reads a King Arthur book that I enjoyed; it gave the stories an oddly comical but less off-putting flavor.

Had to read more Father Brown after the first book

What did you love best about The Wisdom of Father Brown?

The stories, like the first book, are wonderful and the mysteries are great fun to solve. As always Father Brown is right in the thick of things, however, Flambeau is almost always present in these stories, which adds a whole new dynamic. I liked that it's almost "the adventures of Father Brown and Flambeau."

Which character – as performed by Frederick Davidson – was your favorite?

The performance was perfect! The narrator sounds just as you think Father Brown ought to and can then seamlessly move into a French accent for Flambeau. There isn't a whole lot of changing the voice to match a character, save if they are notated as being from a specific country of origin, which I liked as it seemed to keep the flow of the book better.

The narrator does an excellent job of bringing the text to life with interesting and consistent voice work.

For some reason I found this book a little harder to follow than the other Father Brown books. These are all masterfully told stories and well worth the listen.

This man should nit be allowed to speak. He is so nasally and over announciates.

The stories are quite dated, beautifully written, and with that odd catholic theme that doesn’t really register for most people these days. The narrration was all wrong: a creaky, Oxbridge, nasal diction, completely wrong for sweet, diffident father brown, interspersed with a clumsy, stereotypical French accent for the various French characters. This all makes it almost impossible, imo, to focus on the story.

The narrator for this story has a supercilious, slightly nasal, sneering voice. He is completely wrong for the Father Brown stories which are about a gentle, unassuming priest. It put me right off. Try another narrator!!

really tried but could not finish. I love the father brown books but the peculiar narration put me off.

Certainly I have never loved Father Brown stories, or found them easy listens, but the curious and mannered delivery in this case would I think make even Father Brown fans struggle.

The narration was not good and so although I love the stories I had to give up on this book.

I had to stop this after a couple of minutes, the narrator seems to be trying to achieve a combination of Professor Snape meets Jafar! Love Father Brown, but can’t listen to this…

Rarely have I been so disappointed by a narration.

The drawling intonation overpowers the story to the point it’s impossible to follow.it’s as if the narrator is performing under duress to deliver a story they sound patently underwhelmed by and bored to do so.

I felt as if this book was not from the same pen as others I have read. And much to my sorrow I did not enjoy the reader or the stories. However I will dip into the stories again, but not as a whole book.

I won’t repeat the reviews of the narration - it’s all been said I’m afraid: utterly wrong.
No, I want to comment on the completely repulsive and offensive use of racist language. Now, I know this was of its period, and I assume an editorial decision must have been made to include - in particular - The God of the Gongs. I’m aware that this represents some of the attitudes of the time (although some of this must have been extreme even in Chesterton’s time), and I’ve come across milder examples elsewhere, in other writers. I’ve also read the Father Brown stories since I was a teenager in the ‘60s, so I am a fan of them in general- for example, the BBC radio dramatisation is excellent.
But I was shocked by this, believe that at the least this particular story should be removed, and as the general standard isn’t good anyway, I think the whole reading should be withdrawn. I’m going to ask for a refund.

Wow, what a strange collection of stories. Some are very confusing and many of them are highly offensive to anyone but a 19th century white British male. I realise that these stories are of their time, but even with that, GK Chesterton must have been incredibly racist for him to have built this into so many of his stories. The “n” word flies thick and fast and he seems to be suspicious of anyone with so much as an olive complexion. I had listened to the first book and enjoyed it very much, but after this second one, I hesitate to go further. It’s a pity as I really like the BBC series, and had hoped to listen to all the original stories. But unless I can be promised better story telling it’s not worth my time. This does, however, give me greater admiration for the BBC writers. They’ve created an enchanting and inclusive series.

terrible narrator, really off putting voice and supercilious delivery.
I couldn't last more than 10 minutes and have now found a much better version