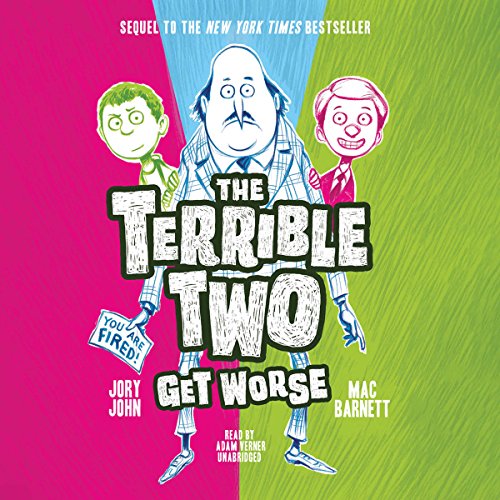 On their own, pranksters Miles and Niles were pretty devious. Now that they've formed a pranking duo, they're terrible! But their powers will be tested when their favorite nemesis, Principal Barkin, is replaced by his stern and cunning father, former Principal Barkin. Now Miles and Niles will do just about anything to get their old antagonist back - including pranking alongside him.

From authors and friends Mac Barnett and Jory John comes the second installment in the series that celebrates inventiveness, friendship, and the power of teamwork - for good or for terrible.

Just as good as the first one! I highly recommend this book on anyone's summer road trip list, if you have kids!

I introduced my son to audible and he loves it. He also loves TV but he started listening to this series and instead of watching TV, he just lais in his bed after he gets his homework done and listens to whatever book he's on in this series.

Great book. Great Idea. Great Story. PURE GOLD! I loved this and hope you do too.

My son wants to listen over and over. He loves it! For lovers of Beverly Clearly, Junie B Jones, and Amelia Bedelia, this book is an easy read has kids laughing along.

Watch 1 first or else you won't get it

I love this book, played it for 3 nights. Suggest this book very, very strongly

It was a great book. It was hilarious. You all should it. I loved it.

This a great book, a lot like diary of a wimpy kid, it includes photos into the text so it not just boring text

This was a favorite while riding to school and running errands. The characters' voices were hilarious and had me and my kids laughing out loud. We look forward to the next book in the series.