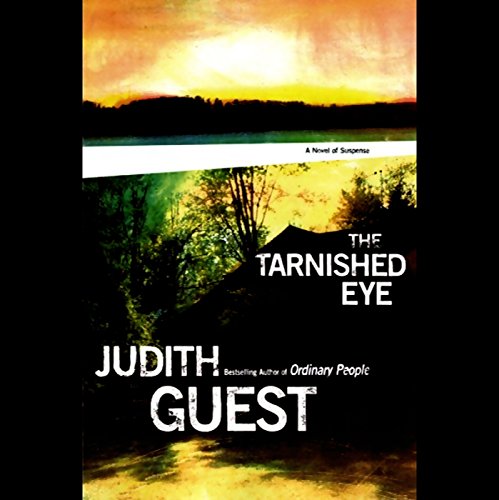 The New York Times best-selling author of Ordinary People crafts a gripping, character-driven novel of suspense that explores the fragile dynamics of family in the aftermath of tragedy.

Taking as part of her inspiration a baffling true-life crime that has gone unsolved for more than three decades, Judith Guest achieves in this absorbing new suspense novel an extraordinary combination of page-turning mystery and intimate, emotionally charged family drama.

The Tarnished Eye takes readers to the community of Blessed, in northern Michigan, and introduces us to Sheriff Hugh DeWitt, a man still grieving for his infant son, who died of SIDS a few years earlier. Meanwhile, up the road from the DeWitts, in one of the rich summer cottages, Paige Norbois grieves for a lost love of her own. Married to a stern and unresponsive man, Paige wills herself to stay in the marriage and sacrifice her own feelings for the sake of her children's stability. But when an unimaginable tragedy strikes, anyone's dreams of stability in Blessed are abruptly destroyed. Paige, her husband Edward, and their four children are found brutally slaughtered in their home. Sheriff DeWitt, deeply moved by the murder scene, must find answers to a string of troubling questions. Who was the man with whom Paige was having an affair? What about the business partner who was stealing from Edward's firm? And, above all, what sort of trauma could fuel a person's capacity for such hate-driven violence?

Judith Guest, with her own untarnished eye and finely nuanced prose, delivers a powerful and poignant work of suspense fiction.

"As the point of view shifts from sheriff to victims and back again, Guest keeps the plot moving along apace, creating a finely tuned page-turner." (Publishers Weekly)
"By maintaining the plot's welcome and even necessary swiftness while at the same time tending to character development, depth, and differentiation, Guest produces a novel shivering with artistry and darkness." (Booklist)

I'm not generally a crime novel fan because of my distaste for wooden, cliched characters and sensational plots. That's why I found "The Tarnished Eye" thoroughly enjoyable. The writing is first-rate, the characters are dimensional and believable, and the plot's twists kept me guessing until the end. Based on the real-life murder of a wealthy family of five in their Michigan lakefront vacation home, the story succeeds in creating both a solid sense of place and emotional resonance.

I finished this in 2 days because I was so hooked on the story. Lots of twists and turns and good character development. Just the way I like a good cop mystery to be.