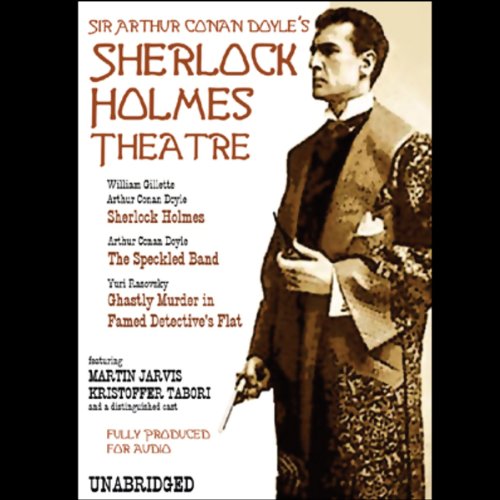 Blackstone Audiobooks is pleased to present the first audio recordings ever of the only two Holmes plays written by his creator, Sir Arthur Conan Doyle. This new, specially commissioned production of the Hollywood Theater of the Ear stars Audie Award-winning readers Martin Jarvis (as Sherlock Holmes) and Kristoffer Tabori (as Dr. Watson).In Sherlock Holmes, the Napoleon of crime, Professor Moriarity, plots with would-be blackmailers to have Holmes killed. And the normally love-proof Holmes falls for an exceptional woman.

What is the secret of the shocking death of poor Enid's sister, whose dying words were, "the speckled band?" Only Holmes can find the answer and save a helpless girl from certain death in The Speckled Band.

When Holmes retired, it created a financial crisis for his friend Watson, who owes money to mobsters who want either their cash or his blood. The surprising upshot is: Ghastly Double Murder in Famed Detective's Flat, a one-act comedy by producer-director Yuri Rasovsky, here receiving its audiobook premiere.

"Rasovsky combines a talented cast, spot-on sound effects, and a rich musical score to achieve a stunning audio production. Every character, every cast member, every special effect, and every note of music merits applause." (AudioFile)

I feel the first segments of these productions were a bit disappointing.Not the fault of the actors,who perform their parts with sufficient skill,nor of the production itself,which shows itself as an assembly of loving craft. I think ultimatly its Conan Doyle himself that must be blamed for this:the need to expand his audience and the lure of money probably tempted him to rehash old plots for a quick buck.Forgivable:these arepleasant productions but not deep.

However,the REAL gem of this mix,unlike the previous review had mentioned was the last "comedy".If you have read all the old short stories and are very familiar with the characters,you'll definatly savor the dialogue here.It begins with Holmes and Watson trying to converse civilly enough,but it escalates into the delightfully vicious bile spitting only old friends can indulge in.And it gets WEIRD.Buy this collection just for the happy catfight and twisted twist ending.

The first story presented here, "Sherlock Holmes", is a fun story with many similarities to "A Scandal in Bohemia" - only this time, Sherlock gets the girl. I've seen a stage production, which I loved, and this audio version brought back very good memories. Except for the odd note at the end (Sherlock kissing a woman?!) it's a real winner.

The second production, an adaptation of "The Speckled Band", has a lot more Victorian melodrama than I remember from the story (or the TV version I've seen), but it's not bad.

Both of these are well acted by a talented cast.

The third production, "Ghastly Double Murder in Famed Detectives Flat", is billed as a comedy. I gave up on it after the first 10 minutes or so. I found it so far from the spirit of the orignial characters that I couldn't finish it. I gather it's supposed to be a satire or parody - I didn't find it funny.

We usually love anything Holmes, but this production can't maintain either the Holmes-Watson legacy or expectation for a new rendition. The script is convoluted and difficult to follow, the actors seem to be trying a bit too hard. I know a reading is disappointing when no one complains about switching it off mid-way through. If you are looking for "more" Holmes, try Caleb Carr, The Italian Secretary. It is a five-star listen.

These are audio performances of actual plays, one written by William Gillette, the other written by Arthur Conan Doyle himself.

The first, Sherlock Holmes by Gillette, is famous as being the origin of the phrase "Elementary, Watson", the Deerstalker cap, the low-slung pipe and Billy the page boy (who was later incorporated into the actual Conan Doyle stories).

The second is an extended version of The Speckled Band by Conan Doyle himself.

Also included is a one-act parody, Ghastly Double Murder in Famed Detective's Flat, which plays like an extended Saturday Night Live sketch, and is MOST DEFINITELY not for children.

The performances are good. My only complaint is the chapter tracks are numbered instead of labeled so if you want to listen to a specific play you can't search for it by title.

Who on earth wrote this rubbish?!

Lovely to hear Kristoffer Tabori’s voice, but sadly this is so abysmally written! A total mockery of the characters - a gambling, wife-hating Watson, a jovial Holmes, and then there’s Mrs Hudson! Whoever plays her needs to quit acting for good! The worst Scottish accent ever, coupled with a ludicrous mockery of Scottish dialogue, rambling utter nonsense. “I’m awaaaaaaaaay to ma kitchen! Mr Holmes, yer something terrrrrrrrrible in bed!”
Yes, Watson’s utterly ridiculous phrase, “a bumping of the uglies” refers to the mad suggestion that Holmes & Mrs Hudson had an affair! This vile mess is a crime against Conan Doyle - and against decent writing!
Seriously, this is dross! Absolutely disgraceful dross!

Not bad but not Sherlock

I have all the audible Sherlock Holmes full casts but this one is not for me. I listen to this only when I am in the mood for a change.

The actors are professional as you would expect from the great Martin Jarvis with good soundtrack.

These are excellent for what they are, just not for me. I prefer Clive Merrison & Sir John Gielgud who's performances are brilliant & actually take you back into the Victorian era. These however, do not.