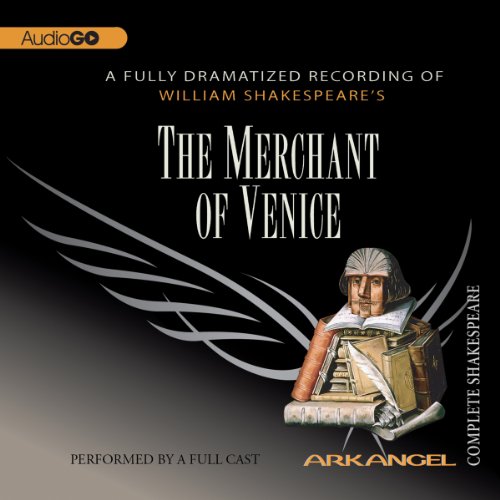 In Shakespeare's most controversial play, the opposing values of justice and mercy must be resolved. Antonio promises money to help his friend Bassanio woo Portia. He borrows the sum needed from the cruel Shylock, but there will be a dreadful penalty if the loan is not repaid.

The golden world of Portia's Belmont calls forth some of Shakespeare's most lyrical love poetry. But the dark shadow of Shylock is never far from the heart of this brilliant comedy as it moves toward its courtroom climax.

Portia is played by Hadyn Gwynne and Shylock by Trevor Peacock. Julian Rhind-Tutt is Bassanio, and Bill Nighy is Antonio.

One Of Shakespeare's Best

This is one of my favorite Shakespeare plays and, overall, the ensemble reads the play very well; I especially liked Trevor Peacock as Shylock. I did find Launcelot's narration a bit over the top, but hearing the play is the next best thing to seeing it performed. The Merchant Of Venice is not performed as much as it used to be because of its supposedly anti-Semitic plot. However, Shakespeare gives Shylock one of the most dramatic and telling speeches in the play "...If You prick us, do we not bleed?...etc. As with many of his plays, Shakespeare's words and actions have deeper meanings. A play to hear (and see) many times.

Good source edition of the play as well: exceptional in every aspect. Thoroughly enjoyable! I hope more Shakespearean productions of this quality will be produced. Haydn Gwynne and Trevor Peacock were fantastic, and Bill Nighy was a delight as usual. An awesome cast and great music, too.

The skill of the narrators and the inclusion of background noise carry you along as if you’re watching an actual play.

...brilliantly produced. It always makes me laugh that the court scenes are totally afoul of due process and legally illegitimate. The problem of Shakespeare's anti-Semitism is most evident.

I’m just not ready for Shakespeare yet. Although the story was interesting it s anti-Semitic overtones seemed a bit offensive.

Bill Nighy as Antonio and David Tennant as the clown? Uh, yes. Definitely, thank you.

What would have made The Merchant of Venice better?

Not being one of Shakespeare's better plays, most of the first 2.5 acts (60% of the play) is pretty dull with only a few bright spots. The so-called comic relief is anything but, and the secondary characters are without personality, while the leading characters are dreary or dull. The main plot proceeds from the very thinnest of premises, or devices, which begins with the tired (even in Shakespeare's day) routine: "I owe you a lot of money, but if you lend me a little more, I have a plan that will get me what I owe you and hopefully more." However, in this case the reason the borrower needs the money is conjectural, for a modern audience, anyway. Many readers ask, why does a guy need money to sweet talk a rich woman, especially one that already fancies him. The historical answer, NOT however given in the play, is that before marrying, a man was expected to have the resources to maintain a family. In this case, the suitor / borrower is in debt up to his eyeballs. Nevertheless, the play does not tell what exactly the borrower does with the money borrowed.

Definitely among the weakest endings in any of Shakespeare, particularly coming after the trial scene of act iv. The high point in the play as with the performance remains the trial scene. Act v. is as lame as any Shakespeare wrote and serves only to tie up one loose end that could have been easily tied up without the rest of the "merry" business.

In each and every scene and case, the performances are perfect examples of actors who persist is expressing something other than what the dialogue expresses. Their emotions and intonations are simply wrongheaded, such that listening to this recording alone, without reading the text at the same time, the listener will be lost as to the general direction of the story as well as the specific thoughts and feelings of the characters.

The whole thing is fairly disappointing, especially given that Arkangel recordings are the best out there.The antagonist in the play is Shylock, likely a variation on the local pronunciation of the Yiddish "Shlak," meaning both "evil" and "slaughter," as the character asks for a pound of flesh. The story is blatantly anti-Semitic, (as well as being racist,) and the protagonist openly condones these sentiments, so the play has little merit overall and contains little to commend it's author to a modern audience, save a few gratifying speeches, which might easily be enjoyed without wasting time on the whole.

Given that this is Shakespeare, any recorded version will leave you lost as to any of the specific ideas expressed in the text because the modern acting in recorded/performed versions is misguided. Whichever version of any Shakespeare you download, make sure you listen and READ at the same time. Stop and reread without the recording until you understand the meaning specifically, not generally, and you will understand not only the play better but also why the acting is pseudo-correct, that is, it may sound like something meaningful, but the intonations and feelings will often not be congruent with the actual meaning of the text. Shakespeare's plays are available in Kindle versions, the best being NCS The New Cambridge Shakespeare.

Thoroughly enjoyed, great narration, easy to understand, my first audio book, will listen to more. David Tenant plays Launcelot I think, and thoroughly brings him to the fore in stead of just a clown in the background.