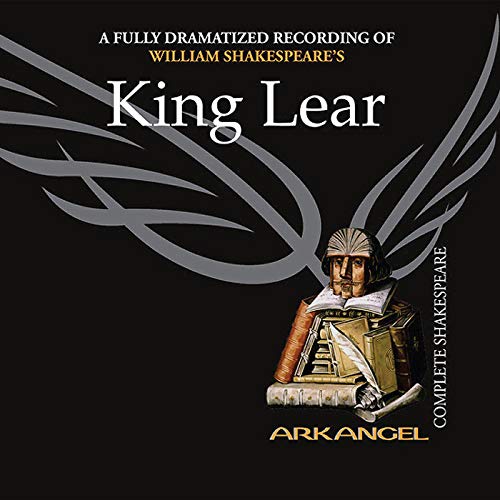 This shattering drama of isolation and loss is one of the greatest tragedies in world literature.

King Lear of Britain has three daughters: the hard-hearted Goneril and Regan, and the good and gentle Cordelia. He determines to divide his kingdom between them, giving the largest share to she who can say she loves him the best. Lear's tragic lack of judgment and self-knowledge is paralleled by the blindness of the loyal Gloucester who is persuaded to reject his virtuous son, Edgar, in favor of the villainous Edmund.

Lear is played by Trevor Peacock and Gloucester by Clive Merrison. Penny Downie is Goneril, Samantha Bond is Regan, and Julia Ford is Cordelia. Edgar is played by David Tennant, Edmund by Gerard Murphy, and the Fool by John Rogan.

one of Shakespeare's finest. the cast did a great job. I almost shed a tear. do good while you can while you breathe.

A profound performance on every level. Peacock at his best with an unforgettable and uncredited turn by David Tenant.

It always takes me a little while to fall into the rhythm of Shakespeare’s plays. With the audio book, I can listen for 15 minutes or so then restart from the beginning to take full advantage of Shakespeare’s words. The actors did a wonderful job and the man who played the King sounds like he could do voice over work for an anthropomorphized bear! A fitting voice for Lear! The recording sounded like it skipped a little in a couple of places but it wasn’t very distracting really.

Fine dramatization, as good as BBC. I really appreciated the Lear voice. Some weird "blop-blop" music is arresting...

Shakespeare always gives you more than you bargained for. The sisters personify the contrasting elements in life, just as Lear symbolizes life itself.

A Tragedy of Love’s Trust

Good rendition of King Lear’s tragic need to have his ego fed by words, not trusting in just acts. As King Lear had everything, but also as king he lost everything, ending up the poorest of the poor, after the loss of his daughters. Clear and well-spoken actors did a great job defining the roles.

Great story, great performance, hard to follow due to it being a play. Often time you do not know whom is speaking

Blame the medium here, not the play itself...

Plays are sometimes hard to follow without being able to see actors and staging, so on. It was sometimes difficult to know which character was speaking or necessarily what was happening. Still, Shakespeare is 10's and this production company (using members of the Royal Shakespeare Company) does 5-star performances

Arkangel Shakespeare is the only one I prefer it matches the Oxford book the best. Great discovery will only and always go with listening to Arkangel. Thank you.

the voices are similar enough that King Lear and one or two others sound similar, and it became confusing. otherwise I liked it

If you could sum up King Lear in three words, what would they be?

Edgar is one of the most difficult parts in the play, but David Tennant was very good.

The whole cast was good.

Bawled my eyes out at the end.

The play translated surprisingly easy to audio. I've seen it many times in the theatre.

Thoroughly convincing adaptation of Shakespeare's exploration of senile decline and corrupting power. The blinding of Gloucester was as shocking in sound as it is on stage. Distinct voices permit tracking of characters even for those who, unlike Shakespeare's devotees, might not be familiar with the play.

Very pleased with the rendition. All the characters well-articulated and dramatized, no difficulty following (and appreciating!) the whole.