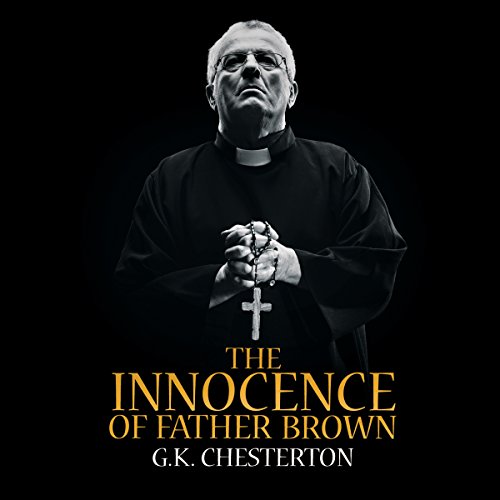 First published in 1911, The Innocence of Father Brown contains stories involving one of the greatest characters in the history of detective fiction: Father Brown. He is a Roman Catholic priest who has an uncanny insight into human evil. Rather than the large serial villains in, for example, Sherlock Holmes stories, the mysteries Father Brown solved were more local murders by small-town crooks, narrowing the suspect list down to those in the area of the crime. The cozy mystery style that The Innocence of Father Brown conveys sparked a revolution at the time, bringing it to the forefront of the detective fiction genre.

These are short stories that feature the character Father Brown, but only peripherally. The viewpoing is not Father Brown's. There is no character development - in fact, there is no character, period. I did want to listen to the stories - but this narrator is so grating that i ended up sampling all the versions available and buying a different version just to finish. It really was not worth it. The narrator sounds fake and ponpous. This is not the first book he has ruined for me, but it will be the last. The writing style is typical of the period - convuted and bristling with similes - he can't just stare into the fire, he has to gaze vacantly at the leaping and crcklong crimson flames as they danced like drunken faeries on the moldy, old logs....if you're okay with that, go for it - but sample all the versions before you get this one.

These short stories had little in them to generate interest. Solve a few murders he did, but he went the long way around the lake to get there. Almost never did he have interaction with other than a couple characters at most. Overall, very disappointing after seeing the TV stories about Father Brown. Actually, in this book, Flambeau was more of a focus character and a murder solver than Father Brown.

Not Father Brown of PBS

Interesting to see how the TV series adapted the character for the better. # tags giving #Sweepstakes