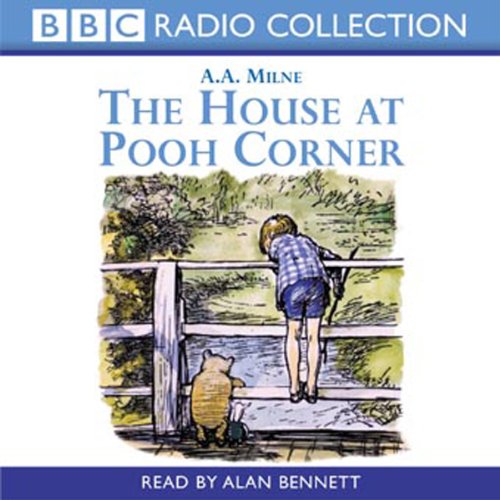 The House at Pooh Corner

What is the connection between a Bear of Very Little Brain and a Honey Pot? Usually it's the very sticky paw of Winnie the Pooh, as he a takes a break between adventures for 'a little something.'

In these 5 stories, taken from the book The House at Pooh Corner, Pooh and Piglet build a house for Eeyore, Tigger comes to the Forest and has breakfast, Piglet nearly meets the Heffalump again, Pooh invents a new game and Owl moves house. As usual they are accompanied by Kanga, Roo, Rabbit and Owl - to say nothing of Pooh's very clever young human friend, Christopher Robin.

Now with musical introduction, Alan Bennett's delightful readings bring each and every character in the Forest to life.

These stories are of course timeless classics of the highest quality. My issue is with the narrator.

He does a fine job with Rabbit's and Owl's voices and one could possibly appreciate his Pooh and Piglet voices. But what he does with Eeyore and especially Tigger is inexcusable! Turns them into sophisticated stuck-up nose-in-the-air Stanford types. Not the lovable characters we imagine when reading the stories ourselves.

Oh how I wish Sebastian Cabot could have made this.

No Better Presentation of Pooh Than Alan Bennett's

Absolutely. Most people know Disney's Pooh -- a goofy and lovable, over-produced character. Bennett's Pooh is Milne's Pooh -- he low-production, innocently funny, surprisingly clever, sometimes wise, and purely affectionate. His friends are representations of people we all know in life -- including ourselves. These readings are pure pleasure.

What was one of the most memorable moments of The House at Pooh Corner?

Too many to count, but all the stories of Pooh and Piglet rank. Eeyore and Rabbit are choice.

Only that it's the best and truest Pooh to be found anywhere.

You'll discover it's not just for children, and never was.

I have only one criticism of these recordings -- the added music. We grew up on pure Alan Bennett, and agree that he was enough.

This is only the first 5 chapters - not the whole thing

Why only the first 5 chapters - bizarre - publisher please amend as this should be the whole book.