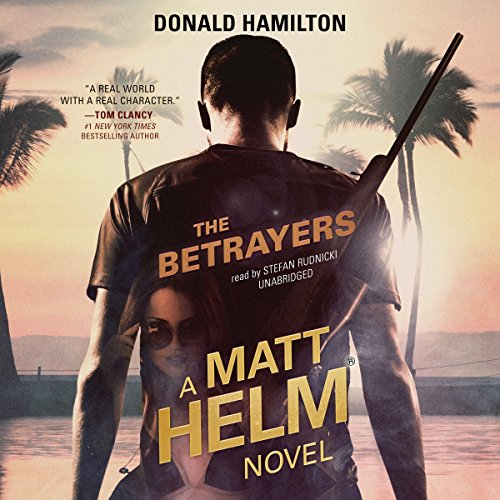 The Betrayers is the 10th installment in Donald Hamilton's iconic and thrilling Matt Helm series, which has sold more than 20 million copies worldwide.

Far out in the Pacific, among the sunny islands of Hawaii, a dark, venomous plot is engineered by a rogue agent, an angel-faced man called the Monk, who has a special fondness for high explosives. His target is an American troopship with 3,000 US soldiers scheduled to blow sky high - unless Matt Helm can stop him. But first Helm has to trust the beautiful stranger who claims to be his sister-in-law and insists that his former "wife" had just willed him half a million dollars.

Helm was going to Hawaii for a long-deserved vacation. Mac slyly mentioned that another agent called Monk was in Hawaii, probing Helm for his recollection. Helm had worked with Monk and he wanted nothing to do with him again. Mac had other ideas. There were suspicions of Monk having ties with Peking. This must be investigated very quietly and without bringing dishonor on Monk’s reputation. Arriving in the Paradise of the Pacific, Helm opens a letter from an attorney that was waiting for him. It states that his late wife Winifred Philipa Marner, aka Claire, was one of two principal legatees of a man named Philip Grant Marner. A woman named Isabel McClain was also waiting for Helm. She had a distinct connection with the letter. So much for the setup of the story. A young, rather inexperienced agent named Jill Donelly was put on Helm by Monk. She was also Helm’s contact and something more. The business with the letter and Isabel is a side issue, although a surprising one, and does develop dramatically later. The main plot is Monk and what he was up to. It just takes a while to get there but when we do, it’s quite exciting. All-in-all it’s a pretty good story with several twists and turns.

Would you listen to The Betrayers again? Why?

Possibly. The narrator is just excellent.

Matt. His attitude toward his work makes him likeable for me.

His voice and the way he reads it adds several layers to the story. He always FEELS like Matt Helm without trying too hard.

One character's death and the way Matt responded in the situation. It was written very abruptly and harshly like it woudlve happened it real life. I loved it. Painted such a vivid picture with such few words.

Really enjoy the series, but the word rape have changed a lot in meaning since then, any way it can be replaced with something suitable to our time, like ravage?

a very interesting plot , reminds me of the old days hope to have more like it it was really funny too.

Whew. I am chewing thru these at a fast rate and losing some of the details. This one - hmm, it was good but I cant exactly recall the storyline but do remember enjoying it as much as i enjoyed the other 9. Great narration.

Matt Helm makes Jimmy Bond look like the English fop he is. i just wish Dick Hill or Richard Ferrone did the reading.

actually a helm novel where the woman lives,and another whose body is never found! helm is getting soft! but really compared to the ambushers any helm novel would be 4&1\2 🌟! Bloom 😢 not directing, but still the show goes on! and well!

Another Helm story with a good plot and characters. Keeps you guessing until the end.