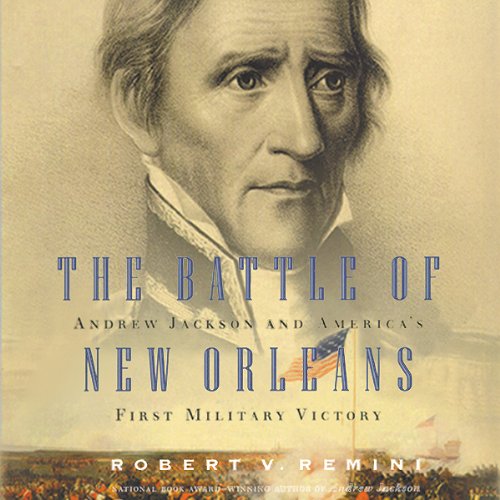 This book addresses a pivotal and overlooked moment in American history. In 1815, Britain's crack troops, fresh from victories against Napoleon, were stunningly defeated near New Orleans by a ragtag army of citizen soldiers under the fledgling commander Andrew Jackson, whom they dubbed "Old Hickory." It was this battle that first defined the United States as a military power to be reckoned with and an independent democracy here to stay.

The Battle of New Orleans sets its scenes with an almost unbelievably colorful cast of characters - a happenstance coalition of militia-men, regulars, untrained frontiersmen, free blacks, Indians, townspeople, and of course, Jackson himself. His glorious, improbable victory will catapult a once-poor, uneducated orphan boy into the White House and forge the beginning of a true nation.

©1999 Robert V. Remini (P)2000 Blackstone Audio, Inc.
"Todd provides a spirited, unvoiced presentation. He reads in a clear, distinct voice that is easy to follow. The dramatic text needs no further embellishment." ( KLIATT)
"Todd skillfully handles this well-documented history of the final battles of the War of 1812." ( Booklist)

If The Johnny Horton Song Is All You Know...

about the war of 1812 and the Battle that saved America from British rule all over again, read this book to get enlightened. Every good American should know this story.

A very well lay out of what happened.

The time line of events were descrbed very well. I was able to visualize much of what was being described and I remained captivated by wanting to hear more.

Good study of the Battle of New Orleans

Would you listen to The Battle of New Orleans again? Why?

No, but great first time read

What was one of the most memorable moments of The Battle of New Orleans?

Learning the depths of injuries and conditions soldiers endured.

Have you listened to any of Raymond Todd’s other performances before? How does this one compare?

Listen to before and after my 2nd visit to New Orleans. Brought places to life.