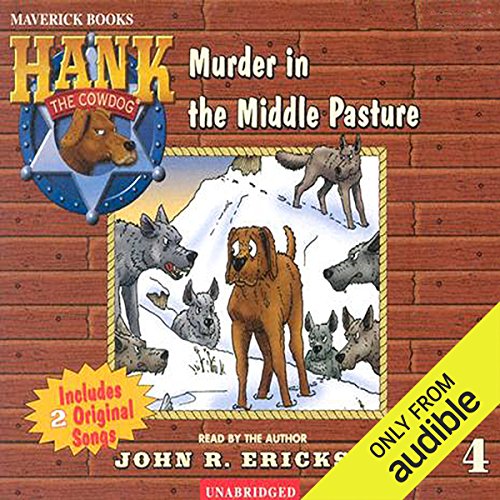 There's been a brutal murder on the ranch, and it's up to Hank the Cowdog, Head of Ranch Security, to conduct the investigation. The only problem is no one's talking. After a dangerous fact-finding mission, Hank thinks he knows who the guilty party is. But before he can make the arrest, he's captured by a bloodthirsty pack of coyotes and condemned to death at daybreak. Can Hank escape before the killer strikes again?

Hank and Junior the Buzzard do a romantic duet of "Beulah, Good Night" and Hank sings a soulful number called "The Cold Weather Cowdog Blues".

Always loved these stories. Enjoyed listening with my family. Fun and kid friendly I suggest it to your family.

My 7 and 8 year old love to listen to these stries in the car. The stories are funny and relatable.

There's nothing like Hank the Cowdog to entertain the kids in Granny's car! Every trip, long or short, his old voice quiets us all. Wholesome, & really entertaining, wit h high morals, & wonderful lessons on courage, loyalty, kindness & friendship without missing a beat in the exciting story....these books are a treasure to our 20+ Grands. (Papa & Granny love them, too. Thanks, Hank. Granny McFee