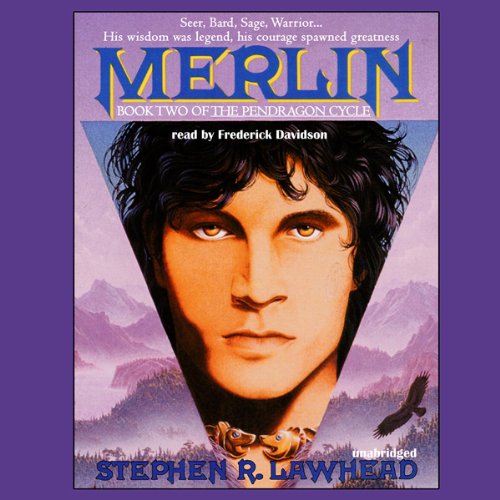 He was born to greatness, the son of a Druid bard and a princess of lost Atlantis. A trained warrior, blessed with the gifts of prophecy and song, he grew to manhood in a Britain abandoned by its Roman conquerors - a land ravaged by the brutal greed of petty chieftains and barbarian invaders. Respected, feared and hated by many, he was to have a higher destiny: to prepare the way for the momentous event that would unite the Island of the Mighty - the coming of Arthur Pendragon, Lord of the Kingdom of Summer. This is the second book of The Pendragon Cycle.
©1988 by Stephen R. Lawhead (P)1995 by Blackstone Audiobooks

"A fine storyteller, he brings the Arthurian characters to life without sacrificing any of the haunting pleasures of the legends." (Omaha World Herald)
"Highly recommended... Reminiscent of C.S. Lewis." (Library Journal)

First this the the 2nd book in the Pendragon, not the 3rd, there are in fact 5 books in this series and even a sequel (Avalon). This is a great book, and tells the story of Merlin, who is both a warrior and a prophet. Stephen Lawhead is a wonderful Chrisitian Fiction/Fantasy writer. He hails on the tradition of George MacDonald (who inspired C.S. Lewis and Tolkien) and Lewis and Tolkien. Don't just read this series, read "The Song of Albion" and the "Dragon King Saga". Should get ten stars if it was possible. **********

One of my favorite all time series of King Arthur

have many books about the "King Arthur" legend. This five book series which starts with "Taliesin" and narrated by Nadia May is a wonderful interpretation. I have read and listened to at least 6 times and have always found something I might have missed when I first listened. The next three books are narrated by another of my favorite narrators Fredrick Davidson, and the last book in the series "Grail" is narrated by Robert Whitefield. Each narrator does a brilliant job and if you enjoy the legend of Merlin and Arthur, you will enjoy this series. It is different and you should start with this book, then Merlin, Arthur, Pendragon and finally Grail. I have at least 6 other audio books about the "Arthur Legend" and most are enjoyable, but this to me takes the reader or listener to fantasy and legend that has not been touched upon before. Always try the free listen that Audible gives to see if you will like the narrator, I have only found maybe 3 in the entire ten and a half years I have been a member to annoy my ears, but if the story is truly good I can usually get past.

I got this book having exausted most of the books I wanted and was searching for something good. This was not it. Listened to the previous book it wasn't that bad and had an ok story teller but, frankly, this guy sucks. He's the type of story teller that if you met him would probably want to punch in the face. On top of that Merlin isn't so much a magician as a priest. Not what I was looking for good luck not putting an icepick in your ears if you buy this.

What would have made Merlin better?

In the past, I have never bad-mouthed a reader, but I cannot abide this reader at all. His voice is like fingernails on the chalkboard. I have always enjoyed Stephen Lawhead books,and I liked Taliesen. But I am done with this series.Maybe I'll just read the books instead.If I could have given him no stars, I would have.

Possibly the autobiography of Mark Twain.I just finished Elijah Woods reading of Huckleberry Finn,( now he is a fantastic reader!) and was reminded what a brilliant writer he was.

Who would you have cast as narrator instead of Frederick Davidson?

I have listened to Audible books for years and really enjoy them. This is the first time I have felt compelled to write so strongly about the quality of the recording.

Actually, Frederick Davidson has a beautiful voice. It's just completely the wrong voice: for first-person Merlin narration, and also for the era being depicted. Davidson's voice would be perfectly suited for Victorian era tales (George Bernard Shaw, Edgar Alan Poe, Oscar Wilde, Arthur Conan Doyle, Jules Verne, etc). But definitely NOT for the England of the Arthurian age!

The narrator of the previous book in the series, Nadia May (Taliesin), was absolutely perfect for the job! I think it would not have taken listeners long to forget that a woman was reading Merlin in the first person.

Unfortunately, I simply could not listen to a "Merlin" who sounded like a Victorian person of high birth. I won't be listening to the rest of the series either, because Davidson is the narrator for all of them. Perhaps I will get it in print some day - when I can get a large print edition or something.

I'm sure the story is great. "Taliesin" was wonderful.

I like Lawhead, but I had to give this one a "2." I struggled through the beginning having to listen to the terrible rendition of Merlin as a child--whiny and just flat annoying.

Maybe some enjoyed his narration, but I did not care for the rest of the narration either. To me it was just overly dramatic. I found myself rolling my eyes numerous times, especially when he was expressing strong emotion.

The narration probably would have spoiled it for me regardless, but the way the story was told wasn't the best either. Too much of the book carries a melancholy tone--he tells the story with a sense of impending doom. This made even happy parts hard to enjoy.

Great take on an old story!

I very much enjoyed this installment in the Pendragon Cycle. Like many others, at the beginning I found the narration very pretentious and stuffy, but toward the end I didn't mind anymore. Not sure if it's because the narrator was slipping out of character or just that I had gotten used to it. However, the story itself was rich and full of depth. I thought it was fascinating how Stephen Lawhead wove together the major conflicting elements in the old legends, and made them a unified whole. Highly recommended!

better then I thought it would be

it took some rime to get used to the narrator from the previous book. but once I did the story really took off. another great peace of work.

Loved the story!
The narrator did a good job even though I did not like his voice at the start.
Overall this is a good read if you love epic fantasy.
WaAr

Greatest Arthur Legend of all Time

Stephen Lawhead is a fantastic writer, a true bard among writers. His style is exquisite and rich, extravagant and smooth-flowing. It removes you from whatever your world is and you quickly feel one with the world of his description. Action scenes leap with brilliance and descriptions of even mundane things are full of a master's detail. The second book of the Pendragon Cycle can be read alone, though it is ten times richer with the background given in the first book, Taliesin.

The narrator, Frederick Davidson, is a truly masterful reader, lending individual voices to each character, and acting the dialogues with passion. My only problem is that if his strength is reading men, his portrayal of women and youths leaves much to be desired. I was very glad when Merlin grew up and the only voice that made me cringe was Charis. Aside from this, it is an excellent reading of an excellent book, and I heartily recommend it to anyone. Every other Arthur tale pales beside this one.

Having read the first book as a paper back and then listening to the second i find the mispronunciation of Welsh words by the narrator hard work. So much so i am considering ditching the audio and getting hold of the book.

If mispronunciation of Welsh words by English speakers annoys you then this audio book is not for you.

I'm sure this isn't a reflection on the actual story its self as i thoroughly enjoyed the first.

Great story ruined by the reader

Would you try another book written by Stephen R. Lawhead or narrated by Frederick Davidson?

No, which is a real shame because I love the books and I liked the reader of the first book. Mr Davidson does a good German impression, sadly it's Welsh he was aiming at. Merlin sounded like a toffee nosed snob who looked down on everyone and spoke with distain. I wanted to get the next book, but I don't think I will since it's read by the same bloke.

What was most disappointing about Stephen R. Lawhead’s story?

Couldn't finish the book because of the narrator, wasted a credit.

Who might you have cast as narrator instead of Frederick Davidson?

The woman who read the first book did such a great job, I don't see why she was changed.

I'm just one of several similar comments about the disappointment in the narration, yet there is a sense that it won't make a bit of difference.

A good book spoilt by a bad reader

I bought this book without listening to the preview which I have to report was a mistake. I bought the book after listening to Taliesin: Pendragon Cyckle Book 1 read by Nadia May. I am afraid Frederick Davidson was a mistake as a narrator. He would be better suited to commenting on a game of Polo. He does not read with sympathy, more he reads as one who likes the sound of his own voice, thus spoiling the story.

If I could get a credit and give this book back, I would