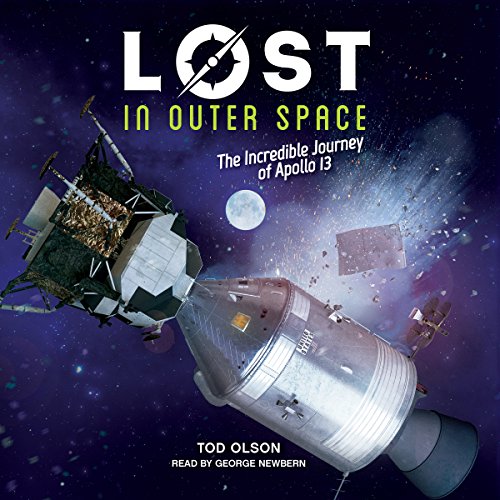 This exciting second book in the Lost series tells the incredible true story of the doomed Apollo 13 moon mission that nearly ended in disaster.

On April 11, 1970, the Apollo 13 space shuttle set off for the third intended American moon landing. Two days later and 200,000 miles from Earth, disaster struck when an oxygen tank exploded onboard the spacecraft, leaving three astronauts with only one goal: to make it home alive.

From "Houston, we've had a problem" to the final tense moments at Mission Control, Lost in Outer Space takes listeners along on the unbelievable journey of Apollo 13 and inside the minds of its famous and heroic astronauts, including legendary Commander Jim Lovell. This is an up close and personal look at one of the most thrilling survival stories of all time.

Good Book yet you felt it could of been better

I am no writer, however I felt the story of Apollo could of been told to a better standard. Keeping to the facts, example, what did Ken Mattingly go through during this time and his efforts to help resolve Apollo 13, serious troubles. How the fuel cells really worked and any options available to squeeze any additional energy, finally WHY was there a lack of emergency batteries in the command modual that Apollo 14,15,16 & 17 carried?? This looks like very poor vision on NASA's brain thrust. The fact that these batteries were not in the early Apollo flights appears to be pure oversight, as at that time NASA kept saying how there were so many 'back-up' systems. Emergency batteries seems to be an obvious and near criminal oversight. NASA is one of the top, if not the top government agency to put ""the spin " to cover their mistakes. This book should of ""HIT ALL THESE FACTS HARD". After all, the truth is the truth.

No matter how many times I listen to Apollo 13 journey, I have enjoyed it. This book is just as good and enjoyed each moment.