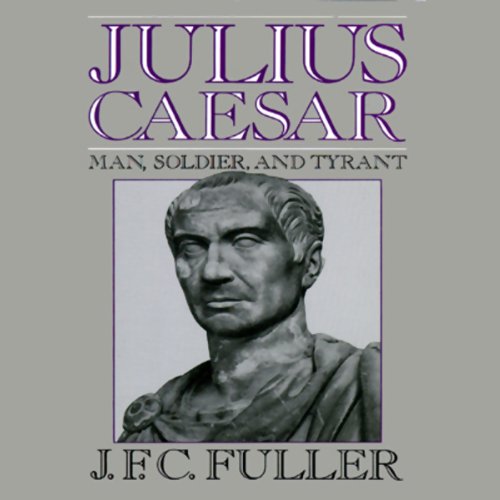 Since the Renaissance, Julius Caesar has been idolized as a superman. There is no doubt that Caesar was an extraordinary man. But as General Fuller points out, Caesar was more extraordinary for his reckless ambition, matchless daring, and ruthless tyranny than for his skills as a military commander. Caesar continually had to extricate himself from the results of mistaken judgments. His unpremeditated Gallic conquest was just one of Fuller's many examples.

In telling Caesar's history, Fuller illuminates a century of Roman history as well, bringing to life Caesar's wars, his armies, his equipment, and his methods. Brilliant in design and impressive in scope, Julius Caesar clarifies how the military, political, and economic aspects of the Roman Republic worked together to produce a man whose name has come down to us as a synonym for absolute authority.

Fuller's background as a military man enriches this biography. Most historians have a shaky grasp of military tactics and strategy and tend to gloss over or sometimes even misunderstand the import of Caesar's actions. Fuller interprets Caesar from the viewpoint of one who fully understands the military mind.

Render unto Caeser that which is Caesers

I love history and after listening to Juilius Caeser it only confirmed my love for the past. This is a terrific read and how it is laided out before you and how it is painted upon your mind will delight you as you take on this life that was Caesers !!!

It will show to you that man was very intelligent in Caesers day, and not some knuckle dragging neanderthal. Look at what we have and use today from the Romans; roads, sewers, water systems, criminal law, military functions, justice, federal laws, government to name only a few!!

Come and join Caeser and live in his sandals for a few hours. Hail to you listener of Audible Books !!! :)

This is propably a great book but the narration makes it unbearable to listen to. The narrator speaks in the most horrible posh english accent with accents on almost all vowels. Like he is talking downhill in every sentence. After 15 minutes i was totally disgusted and quit the book. I don't mind english accent but this was simply too much. Just imagine latin words pronounced with heavy english accent. Listen to the sample before buying.

A richly detailed account of Caesar, his strategies, tactics, and learnings from history. Deeply detailed, and of course quite excellent research.

Tyranny is a stereotypical craft while true democracy is an intellectual art. Here we learn that Ceasar's place in history is cast in more hedious misconceptions than laudible truths.

Great Book For All!

Having read Caesar's Commentaries, Plutarch's Life Of Caesar and Goldsworthy's "Caesar", I'd have to say Fuller does a better job informing his reader of Caesar. Goldsworthy is a great Historian but having a Major General like Fuller(a Student and innovator of Military Tactic) is by far a better experience. If you wanna read an incredible book on Caesar this is it.

I was really excited to listen to this book but to my dismay, I was too impressed with the book overall. Just okay.