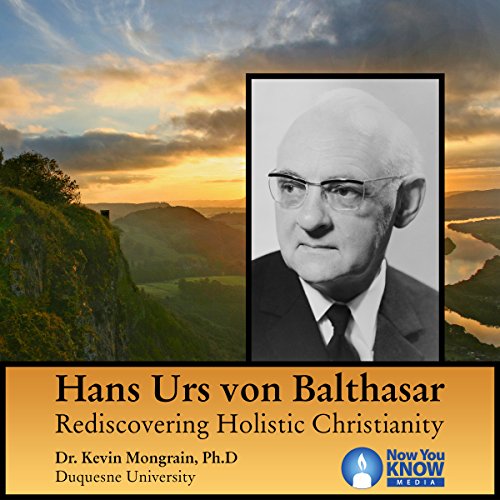 "There will never be beings unloved by God, since God is absolute love." (Hans Urs von Balthasar)

Explore the profound spirituality of Hans Urs von Balthasar. Born in Switzerland, Balthasar (1905-1988) was one of the most prolific and sophisticated Catholic thinkers of the 20th century. As you will discover, Balthasar's theology provides a powerful model for the Catholic Church in the modern world.

In Hans Urs von Balthasar: Rediscovering Holistic Christianity, you will join Balthasar expert Dr. Kevin Mongrain (PhD, Yale University) in exploring this great theologian. When first approaching Balthasar, his corpus of works can seem like a daunting, complex labyrinth. Under Dr. Mongrain's guidance, however, you will discover enlightening threads throughout Balthasar's powerful thought.

Deeply influenced by the Jesuits, Balthasar eventually left the Society of Jesus to become a secular priest - that is, wholly engaged in the world. As you will see in this course, he became a spokesperson of the contemplative-charismatic strand of the Catholic tradition. His vision of the church promoted unity between its hierarchical, theological, and contemplative strands.

Under Dr. Mongrain's guidance, you will explore Balthasar's ideas about authentic prayer, mystical experience, and prophecy. You will also see how his ideas addressed the modern world. Balthasar wove together spirituality and metaphysics, and he sought a holistic Christianity - that is, one that wove together the visions of the saints throughout the ages.

"Kevin Mongrain is a superb Balthasar scholar and, if possible, an even better teacher. He reads Balthasar from the inside, as it were as he thinks through Balthasar’s concern to unite high intellectual discourse with spirituality and concrete forms of Christian life. It is truly wonderful that Mongrain will now reach a wider Catholic audience through (Learn25)." (Anthony C. Sciglitano, Jr., associate professor, Seton Hall University)

"Mongrain is a creative teacher and scholar who makes insightful, evocative connections among thinkers and ideas ancient and modern, which makes him something of a kindred spirit to von Balthasar. His work illuminates von Balthasar’s expansive [work] by exploring connections and disconnections with the likes of Irenaeus, Aquinas, and Rahner while showing his significance for contemporary theology." (William Cahoy, PhD, dean, Saint John’s University School of Theology)

Maybe I need to listen again

I have read two of von Bathasar's books. I have attempted a joint biography of Barth and von Balthasar which I eventually gave up because I felt like I was missing too much because I was not familiar enough with both of their works. I read an introductory reader's guide to Barth which I think was helpful but still want to read another popular level biography of Barth so that I can get more of the background in my head to hang Barth's ideas on.

That is what I was hoping for here, enough background to help me understand more of von Balthasar so that I can read more of him directly and get more out of it. I certainly did learn more about what influenced von Balthasar. But it didn't really feel like it either went deep enough into a few areas to really be classified as a deep dive or wide enough across his work to really be a survey. It felt like an unhelpful middle ground.

I like the concept of lectures like these, but organization and focus really matter and this just seemed a bit too scattered. I am going to look for another intro to von Balthasar and then maybe come back to this again later.

Good, but not enough

What made the experience of listening to Hans Urs von Balthasar: Rediscovering Holistic Christianity the most enjoyable?

Learning about the person of Hans Urs von Balthasar

Have you listened to any of Dr. Kevin Mongrain PhD’s other performances before? How does this one compare?

No. He is personable and seems knowledgeable

I had never learned about the man behind the theology, so it was good to get to know him.

I wish he could have gone a little deeper into the details of Balthasar's thought. He spent more time talking about the man himself and what influenced him, but didn't spend much time on the intricacies of the theological conclusions those influences brought him too.

loved this lecture series. puts the sometimes dense language of Urs into words more suited to a novice.

Balthasar is a rich and rewarding theologian, but his works run many thousands of pages, and it can be difficult to enter into the richness of his thought. This is a wonderful introduction to his work that is appropriate for advanced undergraduates or seminarians.