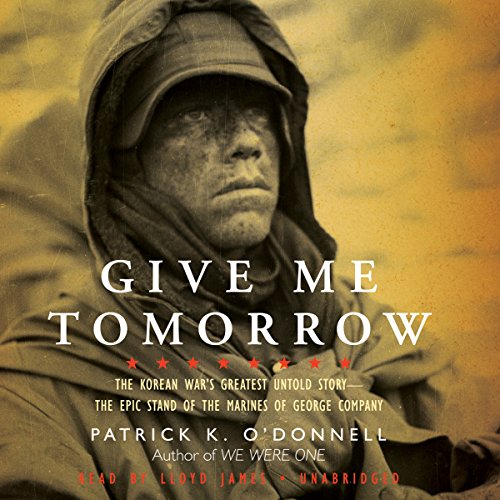 “If I were God, what would you want for Christmas?” With a thousand-yard stare, a haggard and bloodied marine looked incredulously at the war correspondent who asked him this question. In an answer that took “almost forever,” the marine responded, “Give me tomorrow.”

After nearly four months of continuous and bloody combat in Korea, such a wish seemed impossible. For many of the men of George Company, or “Bloody George” - one of the Forgotten War’s most decorated yet unrecognized companies - this would be their last day.

This is the epic story of George Company, Spartans for the modern age. After storming ashore at Inchon and fighting house-to-house in Seoul, America’s last reserve unit found itself on the frozen tundra of the Chosin Reservoir facing an entire division of Chinese troops. Little did this small band of men - green troops who had been rushed through training to bring fresh forces to the war - know they would soon be saviors. This is their story, and it will never again be forgotten.

The boys of Summer Camp….Amazing!!

I would add to the other 5 star comments three things. One, O’Donnell takes time to deliver both the Macro and Micro, detailing interesting behind the scene events. Second, the book is concise and delivers quite the punch for its shorter length. Lastly, O’Donnell really gets it…having spent time with our Marries writing about the battle of Fallujah…I feel he delivers the unique image…the unbelievable hardship and difficulty faced in the Korean War. And to think some of these great men had, on top of the nightmare conditions in Korea…faced epic difficulties in the Pacific fighting the Japanese! Wow... just amazing!!!!

O'Donnell wrote a straight forward history story of George company. The battle scene of the charging Chinese reminded me of the 1959 movie "Pork Chop Hill". Lloyd James did a good job of reading this as a fast pace action story. Enjoyed the comments on Chesty Puller, the most decorated marine in the history of the Corp. The cold and mistakes of the high command made the early part of the Koren war difficult for the Marines but they did over come it all.

This book tells the story of a Marine platoon, during the Korean War. What makes this book interesting is that we rarely hear stories from this war. The book describes what the men had to endure. Reminiscent of the Battle of Bulge, the struggle and triumph makes this book worth reading.

I have read several books on the Korean War. I particular like Martin Ross's " Break Out ", " The Last Stand of Fox Company ", " Colder than Hell " all dealing with the First Marine's breakout from the Chosin Reservior. It is really hard to believe the small unit acton displayed from George Company in and around Hagaru after being mauled on their trip from Koto-ri.

I am a shamed to admit that my reading and knowledge of the Korean War is minimal.

However, reading (listening) "Give Me Tomorrow" has opened my mind and educated me regarding this terrible war. Most people, and I was one of them always referred to this subject as the Korean Conflict. But after reading Mr. O'Donnell's educating work this was no and never will be a Conflict in my eyes again.

Thank you Mr. O'Donnell for educating me and my thanks to all Americans for their service during this war.

This book does a great job of explaining to the reader the sacrifice, the suffering and true heroism of our Korean vets. Like most Americans, I never really gave the Korean "conflict" too much thought, we just never considered Korea a "real" war, we thought of it as a "police action." Well this book certainly set my thinking straight. This WAS a war and our Korean vets are truly Heros. Thank you for your sacrifice.

I have absolutely no complaints with this book, but I cannot give it more than three stars. It is a war book. It describes in great detail exactly what happened to George Company at Chosin Reservoir during the Korean War. As such, it depicts many individuals' experiences and so you do NOT get close to any one person. I prefer books that draw me close to the thoughts of one or just a few individuals.

The audiobook's narration by Lloyd James was good.

From start to finish Patrick O'Donnell had me hooked. I normally only listen to books on the drive to and from work. This history of the Marines of G company was so gripping that I listened all the way through.

Another untold story about a forgotten war

For those who read (or listen to) military history books, Korea is a largely untapped reservoir of yet-untold stories. Books like Colder than Hell and The Last Stand of Fox Company gave us a glimpse of the hell of a Korean winter in which staying alive takes a lot more than remembering what they taught you in boot camp - assuming you even got to go to boot camp.

This story revolves around the Marines of George Company who fought to take and hold the airfield at Koto-Ri. This was essential because it would serve as both a supply replenishment point and evacuation center for the many wounded.

The enemy fought hard and bravely, and the Marines had to do the same. The men of George Company did, were victorious, and now how proudly have their names carved in history. The story is well-told, and one worth hearing about.

history for the uninformed

The worst thing about this book is the narrator, I found it impossible to listen to. The book itself offers nothing new or worth listening to, the heroic stories of these men who fought in Korea are lost in the writing.

a forgotten part of history

As a brit, American narration can sometimes grate but Lloyd James has a great tone and timbre to his voice that I can and have listened to for hours on end. it suits this fascinating story perfectly. I highly recommend this book and narrator.

What an incredible story, the narration makes it even more hard hitting. I knew nothing of the Korean War and this book has inspired me to find out more about these heroic and inspiring souls who gave everything.

Gritty and Moving well worth a listening

Excellent story, harrowing in places, moving in others. Tells the story of a often forgotten war

OK but a bit long winded

this was not the best and most exciting read for me, the word recollect or recollection was constantly used throughout....on a positive, some great facts in there and some good learnig points.

Good free from audible, I was not expecting what I heard the forgotten war, be grateful that we may never ever have to do what these young men did. Thankyou

i liked it, I liked it alot. how come this isn't a movie yet.

I really enjoyed this book of this very epic story. Brilliantly written without being too graphic but you understand the true warriors were. I recommend it to all people who want to understand the horror of war

An important source about a forgotten war

A very honest and gripping story about a forgotten war. It becomes really clear how numb people become of war.