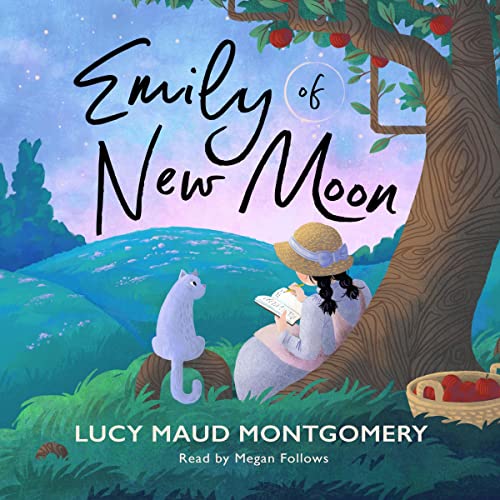 Lucy Maud Montgomery, the Canadian author of the popular Anne of Green Gables series, introduces us to an endearing new heroine in Emily of New Moon. Like Anne Shirley, Emily Starr is a quick-witted and imaginative orphan who is sent to live with her two maiden aunts at New Moon Farm after her father dies. Though initially disheartened by her strict and conventional Aunt Elizabeth, Emily slowly grows to love her new family and New Moon Farm.

There she makes friends with Ilse Burnley, a tomboy with a blazing temper; quiet, artistic Teddy Kent; and Perry Miller, the hired boy, who Aunt Elizabeth looks down upon because he was born in the impoverished “Stovepipe Town”.

Montgomery considered Emily to be a character much closer to her own personality than Anne, and some of the events which occur in the Emily series happened to Montgomery herself. Emily is described as having black hair, purply violet eyes, elfin ears, pale skin, and a unique and enchanting “slow” smile.

This charming audio adaptation of Emily of New Moon is set against the backdrop of picturesque Prince Edward Island. A delightful story the whole family will enjoy!

I was so excited to learn that Meagan Follows would narrate one of my favorite books. I have loved Emily just a smidgen more than Anne. It was a lovely reading, although was didn't realize it was an abridged version. No matter. This will count as my 7th read. Loved it!

I can't believe I never read this!

I was a child all over again ! Montgomery brought us characters that are charming and loveable. My favorite next to Anne. I love you Emily! Also, Megan Follows is amazing.

I have other copies of this book from Audible, but the narration by Megan Follows here is excellent. It make the story engaging and compelling in ways the others have not. If you're getting "Emily of New Moon", this is absolutely the one to buy.

Very enjoyable. I will always enjoy Megan Follows reading, especially Lucy Maud Montgomery stories. She understands that world. Her voices are distinct and I especially liked the Irish priest. I waited over a year for this recording. I am hoping that the producer will continue with the other Emily books with Ms. Follows as the narrator. I will buy ahead just like I did this one. My only criticism is that it is abridged and therefore ended too quickly.

Abridged Severely and Destructive of the Story

I LOVE Emily and have read the books uncountable times. And I love Fallow, but the abridgment that happened in this book was horrible. Especially if someone is planning on listening or reading the rest of the books in the Emily series. Characters are mutilated to make them say things they would never actually say, major events and other characters are flat out skipped. I had to quit halfway through because it was so frustrating. I DO NOT recommend this version to anyone interested in actually getting to know Emily.

A children’s book? Unless you become like little children you cannot see the kingdom of heaven!
Come with open hearts and see!!

Emily of New Moon has always been my favorite of LMM’s stories, and I had always hoped that an audible version would be made. Megan Fellows’ narration is the perfect choice for this saga, and I certainly hope that she is able to continue with subsequent E of NM books!!!

Totally missed this is an abridged version. Was so excited to hear "Anne" read Emily. 😭

I have been meaning to read the Emily books since I finished the Anne of Green Gables series as a child between 8 &10. Somehow it took a few decades but I've at least somehow started now. I almost didn't keep going after the first few chapters. It was, it seemed to me, a more harsh beginning and relentlessly, opionatedly, truthful book than I recall of the Anne series. I guess I was comparing them too much. But really, L.M. has crafted another unique young personality that touches off something and resonates just as she did with Anne. I think I will always love Anne best, but Emily is intriguing so far. Megan Follows - can I say enough about how infatuated I was with her portrayal of Anne when I was a child, and which has shaped my opinion of her performances (and Anne) forever more? I'm sure I could try but it wouldn't do much good for this review. I can only say that I feel she did a superb narration and thrilled a little when I noticed that she seemed to subtly sound like Colleen Dewhurst as Marilla with some of the tones and inflections she imposed upon Aunt Elizabeth. Or is that just my imagination? Regardless, she did it all justice, and kept her styles varied enough between all of the characters that it was easy to be caught up in them as individuals and know who was talking at which point. I really look forward to and hope she will continue to narrate more Emily books and/or works by L.M. Montgomery. Thank you.

I loved this audiobook! Listening to Megan Follows is just wonderful. Just can't wait for the second book in this serie to be released!