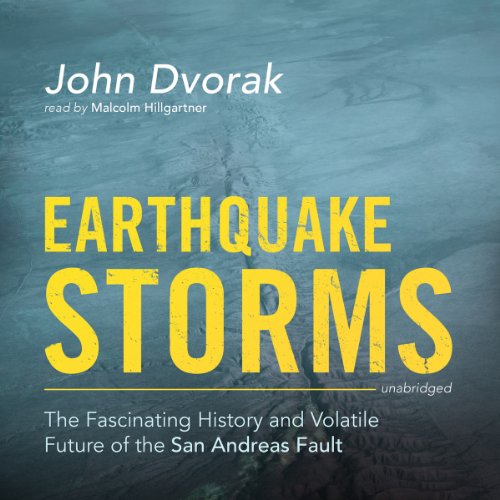 The lives of millions will be changed after it breaks, and yet so few people understand it, or even realize it runs through their backyard. Dvorak reveals the San Andreas Fault's fascinating history - and its volatile future.

It is a prominent geological feature that is almost impossible to see unless you know where to look. Hundreds of thousands of people drive across it every day. The San Andreas Fault is everywhere - and primed for a colossal quake. For decades scientists have warned that such a sudden shifting of the Earth's crust is inevitable. In fact, it is a geologicn ecessity.

The San Andreas Fault runs almost the entire length of California, from the redwood forest to the east edge of the Salton Sea. Along the way, it passes through two of the largest urban areas of the country - San Francisco and Los Angeles. Dozens of major highways and interstates cross it. Scores of housing developments have been planted over it. The words San Andreas are so familiar today that they have become synonymous with earthquake.

Yet few people understand the San Andreas or the network of subsidiary faults it has spawned. Some run through Hollywood, others through Beverly Hills and Santa Monica. The Hayward Fault slices the football stadium at the University of California in half. Even among scientists, few appreciate that the San Andreas Fault is a transient, evolving system that, as seen today, is younger than the Grand Canyon and key to our understanding of earthquakes worldwide.

This book is almost entirely focused on California, with a bit of discussion about other great quakes in world history. It is lucidly written and easily understandable to the lay person. The book covers both the geology of the San Andreas Fault and the history including such people as Grover Gilbert, Harry Fielding Reid who studied the 1906 San Francisco quake. Andrew Larson a geology professor at the University of California Berkeley who named the San Andreas Fault in 1895. Of course, Charles Richter who developed the eponymous magnitude scale was discussed in detail. Dvorak describes the history of all the known California quakes but goes into great detail about the San Francisco earthquake of 1906. He explains the 1960 discovery of plate tectonics and how that brought better understanding to the geology of California and the understanding of earthquakes. He almost makes a guide to where to go and what to look at along with what is the meaning of what you are looking at along various site of the San Andreas Fault. He gives a description how the San Andreas Fault works and how other fault secondary fault lines develop. He states that the San Andreas Fault and its many subsidiary faults are tearing California apart. He says geological California has been in a quiet time for quakes but according to past history this is going to change. Dvorak apparently worked for the U.S. Geological Survey. Overall I found this to be a most fascinating book. Malcolm Hillgartner did a great job narrating the book.

Narration is spot on. Information is easy to follow (and if you like visuals just keep google earth open as you listen) and a fascinating update to the rudimentary plate tectonics i was taught in school decades ago. An excellent book. I hope to hear more from this author.

Anyone with a respect and fascination for Earth Science will enjoy this book! The performance was perfect for this topic.

Written in a fluid, accessible story telling style, I found this book to be fascinating, especially for a Californian. It helped me better understand the shifting earth upon which I have lived most of my life. I am thinking, however, that having listened to it, I now want to buy it in hard copy form so that I can re-read the descriptions when I travel to the specific locations described.

Such an interesting and intriguing topic and covering of the subject matter. Loved learning the history and studies of earthquakes.

I loved listening to this book, I may buy a hard copy, and thats unusual, as well as the strongest endorsement I can give.

If you enjoy the Earth Sciences, this book is for you! The Scientists illuminated in this tome are a fascinating lot of unique folks who helped formulate the science of plate tectonics. I love the way the author gies the history together with the geology of the San Andreas fault. Very well done!

Excellent history of the study of earthquakes

I have recently become interested in earthquakes...how they happen, why they happen. I've watched every documentary and lecture I could find online and stumbled across this book while browsing Audible. I don't regret the purchase or time spent listening one bit. The only part that got a little "long in the tooth" was the part that dealt with the 1906 San Fran earthquake but this is easily forgiven because I realize the author was attempting to "take you there" which he did quite well.
The rest of the book goes over the science of earthquakes which is a relatively new science. I found it interesting how "settled science" was overturned again and again. Those who helped establish what we all now consider Earthquake 101 all had to overcome criticism and outright hostility from fellow scientists. The author helps you realize just how new our understanding of earthquakes really is. He further debunks the science of earthquake prediction.
It is vitally important that you begin listening to this book with an open mind and be willing to admit that what you thought was fact just might be wrong.
The final chapter was really fascinating to me because he goes over areas along the San Andreas where they are very overdue. I listened to this part just a few days before the Salton Sea area was hit by a massive swarm of quakes.
A great follow-up to this would be the lecture given by Nick Zentner entitled Great Earthquakes of the Pacific Northwest, you can find it on Youtube. He also puts to rest many false "facts" of earthquakes.
You can buy this book with confidence that you will NOT regret it.

I enjoyed this book. Excellent history on California earthquakes and the study of earthquakes. One error noted. Reference to Alaska as the "50th state."

Was a wonderful book that was insightful plus presented the subject in a manner that made it fun to listen to it. Intriguing

Not be familiar with the geography, it was difficult to follow some of the descriptions. Well red, a bit on the technical side in parts but very informing. Glad I listened

A much better listen than I expected. Perhaps somewhat detached in places for those if us who din’t recognise all the Californian areas specifically, but non the less, very informative. Well read by MH.

Loved it now looking for more like it. Being as I'm into Seismology and Volcanology.