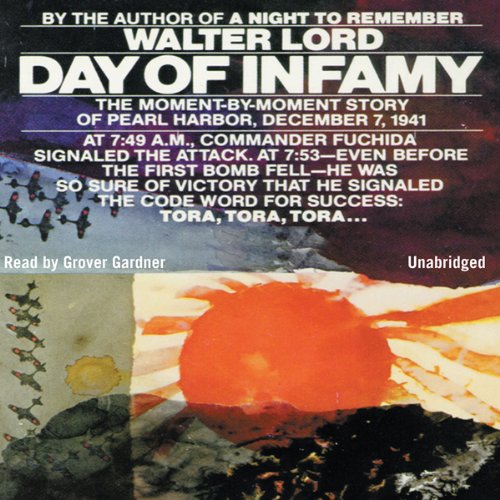 Day of Infamy is Walter Lord's gripping, vivid re-creation of the Japanese attack on Pearl Harbor on Sunday, December 7, 1941. The listener accompanies Admiral Nagumo's task force as it sweeps toward Hawaii; looks on while warning after warning is ignored on Oahu; and is enmeshed in the panic, confusion, and heroism of the final attack.
©1985 by Walter Lord (P)1998 by Blackstone Audiobooks
Seconda guerra mondiale
Mostra di più Mostra meno

"Stuns the reader with the weight of reality!" (James A. Michener)

Though Walter Lord's Day of Infamy is nearly 50 years old it does not feel dated-in fact, if anything it seems fresh because of the sheer amount of first-hand anecdotes which were only available immediately following the war. Lord weaves many compelling stories of American, Japanese and Hawaiian participants of the attack on Pearl Harbor. Tom Parker's reading is excellent, as always. This is a classic that I highly recommend.

There are many detailed books concerning the Japanese attack on Pearl Harbor that catapulted the US into World War 2 as an active combatant instead of its then current role as weapons and food supplier, including those from both the US and the Japanese perspective. Many of those give detailed explanations of what happened, when it happened and how each event affected the overall attack. This book is very different in that the entire attack is viewed through the individual actions on hundreds of people, US sailors, marines, soldiers and civilians as well as Japanese sailors. There is no overall high level view of what happened, or a moment by moment description of the events, but rather the story is the sum of all of the individual accounts.

Thus we understand the attacks on the US battleships by hearing what sailors and marines on the ships did, what they could not do, what they saw and how they reacted. Sometimes this narration tells much that an overall account could not, as with the description of how one mess stewart, with no training, took control of one of the machine guns firing at the attacking Japanese planes, how one sailor stayed at his machine gun while the fires raged around him and how sailors trapped below decks waited for either rescue from their sunk ships, or suffocation as the air ran out. Often the narrations, although compelling, fail to tell us how the events hung together and what the views of the commanders were, so the book ends up being a mixed bag.

This book is quite old, having been written in 1957, so it lacks information that has been gleaned in the intervening years through research, but it is still a worthwhile look at the event that started World War II for the US. The narrator, Grover Gardner, has the perfect voice and pace for this type of book and, although much information is missing, especially from the Japanese side, the book is well worth listening to for someone who wants a more personal and less academic view of the terrible events of December 7, 1941. But for those really interested in learning about the attack itself, this book serves more as a companion piece for more detailed books covering the war in the Pacific. While there are many such books now available readers should not go wrong by starting with those by Ian Toll (Pacific Crucible, The Conquering Tide) or James Hornfischer. The former covers the war from the start, the latter from later in the war.

This particular history of the Japanese attack on Pearl Harbor is unique and extraordinary because of its focus on very numerous, brief, revealing and often-poignant direct quotations from those who were present that day. The book gives insight into how it must have felt to be present that day. On this point alone the book is a roaring success.

Even the Acknowledgements Are Great

This exquisite examination of the battle of Pearl Harbour is superb.
Even the acknowledgement section - at the end - is a litany of relevant names and sources that validate and demonstrate the thoroughness of the research.
If you are a history buff this is as near perfection as possible for reportage of an iconic moment in WW2.
And Grover Gardner, as always, THE best.

One of the best

Day of Infamy is one of the best accounts I’ve read regarding Pearl Harbor. I especially enjoyed the personal accounts of the day. Worth your time!

Great dictation of time period. Pearl Harbor back when America was saved. Now look where we are at, disrespecting these Men who fought for our Freedom. Will we keep our Freedoms now?

This is one of the best books about Pearl Harbor I have read. The level of detail is unbelievable and shocking at the same time.

Keep up if you can. The details are rapid fire but the facts are mostly portrayed from a personal perspective. This kept my interest more than anything else.

The attack on Pearl Harbor was in my view a defining moment in 20th.Century history, it deserves better than this . This is a collection of observations related only to the event, they do little to enhance the long developed aim (of Japan). The attack and its place in the Japanese projected economy, as well as the long term Japanese projected hegamony in South East Asia, appear to br missing in the narrative.
This should have been a page turner, in my view it fell well short of that

I enjoyed listening to Grover Gardner narration of the personal reminiscences of these participants, military and civilian which brings greater depth for me of this historic and awful day. Walter Lord’s work will live forever

I picked up Day of Infamy from a Audible Recommendation, and was really impressed with it.

It balances knowledge and depth well - while the author displays a clear understanding of the events he balances it well so the narrative doesn't become turgid. The writing is now sixty years old and it shows in the style. At points it's difficult to tell weather the book influences Hollywood or Hollywood influences the book. At times characters and situations can feel a little unreal.

The narration is generic, the narrator is clear and keeps the narrative moving, but the style does feel outdated.

Saying all that I would look at other Walter Lord books.