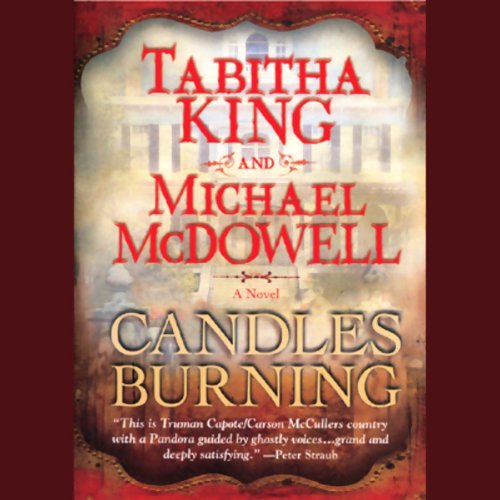 Author Michael McDowell, known for his chilling Blackwater series, left behind the unfinished manuscript of Candles Burning at his death in 1999. His close friend, Tabitha King, has taken up where he left off, weaving a Southern gothic fabric of murder, guilt, innocence, corruption, and survival, in the voices of the living and the dead.

Seven-year-old Calley Dakin is daddy's little girl, but her well-born mother persists in her contempt for the Dakin name. When her daddy is tortured and murdered by two women with no discernible motivation, Calley and her mother find themselves caught up in inexplicable events that exile them to Pensacola Beach. There, another woman awaits their presence, a woman who knows what Calley is and who seeks to control her. For Calley is no ordinary little girl.

"[A] lightly supernatural confection....King completes it beautifully as to tone, aura, and flavor, and it's funny and intriguing, magnetically readable." (Booklist)
"A mix of magic realism and Southern gothic, this stunning collaboration moves at a hypnotic pace, like an Alabama water moccasin slipping through black water." (Publishers Weekly)

This is more than just the charming coming of age story of a slightly different southern girl named Calliope. I set out listening to it as though Ms. King & Mr. McDowell were relating a story of a sweet girl, her society mother and dominant grandmother. But it's much more.
I had to go back to the beginning and listen to parts again. I had forgotten critical details in the little vignettes about Calliope's childhood that turned into important points later on.
The story itself, is very good. You'll find yourself rooting for Callie, as she develops into a woman, much to the chagrin of her mother and the manipulative souls around her, but the mystery buried within is what the book is all about.
So, pay attention to the details and you will enjoy the book that much more.

At the beginning I thought of fast forwarding. Glad I didn't there was one spot where I said "Oh Yeah" this is going to be great. And I wasn't wrong. Strong story line with well developed characters. Subtle is how I would characterize this amazing novel. If you like supernateral tales then this one is for you. Mother and daughter relationship is somewhat humerous. Not funny ha ha though. Coming of age is also an important theme. All in all this book is an enjoyable and rewarding listen. Finally I must say that the Narrator could not have added more flavor to this delicious tale. It basically has a Southern backdrop with a little girl able to communicate with dead people.

I gave this three stars because of how realistic the characters seemed, and how fantastical and mysterious the story Almost was, but it should have gotten 2.5 instead. I like Michael McDowell's work a lot, and i could tell where his touches were at some moments in particular, but then i could also tell that Tabatha King likely took over and steered his ship into the ground. He wasn't a perfect writer, but this isn't something i can imagine him doing. I know it's no small task, finishing the work of a departed novelist. But so many of McDowell's creepy moments just ended up silly nonsense that, i guess, was supposed to be metaphorical in King's eyes. That, and it just didn't have much rise and fall to it, like the plot maintained a flat mundaneness until the last half hour. Too bad.

The start of the book was so promising. Then the second half was a different story with somewhat similar characters. The southern charm of the first half was definitely out of the second part. And the second part droned on: chapters that didn't move the story along and boring characters bits, rubbing mamma's feet as a teenager?!! The supernatural part was introduced in the second part and not interesting. I do not recommend this :( However the narrator was excellent...the story was dull as a butter knife.

It's been a while since I have read a Tabitha King Novel but this novel is so her...especially the twist...surprised the crap outta me...pretty good story.

Dragged on and on

I loved the detail in this book and I thought the writing was good. The problem is it dragged on and on without much happening. The ending was very anticlimactic as well. I felt that they left many things unexplained and the way the ending was wrapped up it almost felt like an afterthought.

I found this book to be riveting. I loved the story line and the narrator, Carrington MacDuffe, took me 'there' with her superb southern accent. I was spellbound. But, I have to admit, that I was a little disappointed in the ending. But, overall, it was still an excellent adventure.

Would you try another book from Tabitha King and Michael McDowell and/or Carrington Macduffie?

I liked McDowell's Blackwater saga very much, which made this one even more disappointing. I guess I don't know what to expect from Tabitha King.

What was most disappointing about Tabitha King and Michael McDowell ’s story?

This story was painful to listen to, with the mean-spirited treatment of Cally by her Mother, Grandmother and brother. The plot was left mostly unexplained with not one hint as to the motive for the murder of the father until the very end of the book. Why was Cally special? I still don't know. Why did her hair fall out? How did the island protect them? Who were they being protected from? A book of arguements and cruelty and not much story.

What does Carrington Macduffie bring to the story that you wouldn’t experience if you just read the book?

I am thankful to have not grown up in the South in the '50's.

The download of this book also skipped and stopped at random points while being played.
Not a great listening experience at all.

I have thoroughly enjoyed reading Michael McDowells books and looked forward to listening to Candles Burning. The narration was wonderfully done, and in truth the only thing that kept my interest going thru the interminable length of this novel. It was easy to see that this was “ ghost written” by a less masterful hand. Horrendous bore of a story told with perfect Southern charm.

A bit of a letdown

The narrator is top-notch, and suits the ambience of the book very well. The story is interesting, but once it was finished I found myself rather disappointed and unsatisfied. The ending seemed rather contrived, and just did not seem worthy of how the story began.

So much boredom for this ending?!

About the narration: it was okay. To me, the accent sounded authentic enough, though a bit caricaturish with some of the characters, which was a pity. The mother and granny were awful enough, but the narrator slightly accentuated that which just made them a bit comical. Also with some of the servants, I had the same problem: the over-acted accent and tone of voice made them sound comical in a way I didn't like. About the story: I have never read anything from either writer. So, I found it interesting when other reviewers, who knew both writers, said things like "you can tell exactly where Tabitha King took over", and how overly descriptive her writing was as opposed to his, which was... well, in my opinion, painfully over-descriptive already. At the very beginning of the book I already constantly had the feeling that much of the writing was just to fill as many pages as possible. Descriptions can be lovely in a literary way but here much of it was simply irrelevant and just failed to appeal to my literary sensibilities. I stuck it out though because I so wanted to finish the first book I ever tried from the wife of Stephen King, who is among my favorite writers. I could not tell where she took over at all, which is no surprise, given the fact that I really don't know the writers. I just struggled with the feeling that from the point the little girl leaves home with her insufferable mother and horror of a brother, none of the story has anything to do with anything. What I mean is that the book goes on and on and it's just a story of a weird and annoying little girl whose dad had been murdered, growing up with an awful mother, with some mystery thrown in, but even the mystery is kind of random. One review mentioned the masterful building up of suspense by Michael McDowell which I did not see. What I saw was just random stuff that's kind of spooky but has nothing to do with what I thought the premise was. And if you stick it out to the end, this gets confirmed. I myself was so disappointed, that I gave up listening half-way through the last chapter! I just could not listen for another half hour because it was pointless. I felt cheated out of so many wasted hours while I could have been listening to something new end exciting, or Stephen King's masterful Lisey's Story for the fourth time! Dozing half the time and missing bits and then rewinding to make sure I was not missing important hidden clues, to then find that there hardly could have been any important hidden clues because here, in the last chapter, all my worse suspicions were confirmed. I have no idea what all that was about the dead baby in the footlocker. At least I think there was a dead baby in the footlocker, I was so losing concentration by this point that I was probably missing half of what was happening and didn't care to rewind anymore. I didn't follow what the whole footlocker scene was about at all. The ransom money was mentioned, did she find it and where, I am clueless! I was neither surprised, nor very intrigued by the way in which Callie found out about who was behind the murder of her dad. Instead of the chapters and chapters of what could make a decent coming-of-age film with no-one getting murdered and none of the entirely pointless supernatural elements, there might have been much more suspense and development of Callie finding out about her dad's murder. Because that, very disappointingly, just got thrown at the reader in a quick chapter! Not to mention the epilogue, in the middle of which I stopped listening. I really could not care less who financed her studies and had no interest in her career and sexual preferences summed up in a short afterthought. I have no idea what the significance of how her dad's killers died had been, or whether there was any mention of that after I stopped listening. I remember how intriguing that sounded before I bought this audiobook but now I don't care! Here is why, with SPOILER ALERT: I will not give away everything. But don't read on if you want to be surprised, though I suggest that rather than a surprise, it will be a massive disappointment when you get to the end! To be duped into thinking through hundreds of pages of entirely irrelevant events for something mysterious going on, just to see in the very last chapter the mystery getting wiped out and explained away with psychology and natural optical phenomena, was more than an anticlimax! As literary experiences go, this was a crushing one. I am even considering returning this book for a refund of the credit I bought it with. Having very nearly finished it I am not sure I qualify but I might try anyway,