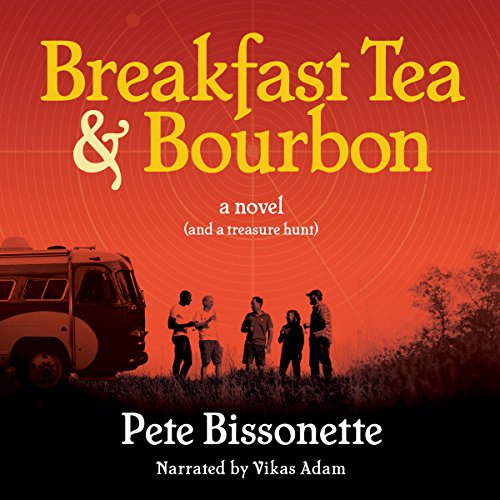 Follow five best friends who sign up for a treasure hunt, rent a dilapidated RV, and head out on the search. This funny and quirky novel is a story within a story, because woven between the lines are clues to an actual treasure that was hidden for you to find.

After experiencing enough losses for a lifetime, Nels Ware does not take things for granted, especially his family of friends. So when a $50,000 treasure hunt grabs his attention, he recruits them for the rollicking quest.

Nels is certain he has deciphered the clues to the treasure's location. But has he? Is he leading his friends on a cross-country wild-goose chase? Will their dilapidated RV even deliver them to the treasure? Or will someone else beat them to it?

Woven within this book are real-life clues that led to an actual physical treasure hidden somewhere in the United States worth $50,000. While the treasure was found in 2017 and the $50,000 prize awarded, the story remains a quirky and welcomed guide to a meaningful and joyous life.

Nels had read about a clandestine social club that met at cloistered resorts, hotels, castles, private islands, and assorted lairs. When an ambiguous ad announces a meeting of ''The League of Uncommon Gentlemen", he quickly attends only to be drawn into a mysterious search for $50,000.

What follows is a curious and unpredictable road trip for five long-time friends who declare bourbon the Booze of Contemplation, tea the Secret of Mornings, and Persian Blues a Weapon of Hypnosis.

Unraveling clues to the hidden treasure, they imagine a girl they first saw playing a flute in a quarry to be following them. Coincidence or trouble brewing? As shrouded secrets unveil, it becomes a surprising and heart-stopping race to the finish.

"A perspective so generous, hilarious, and bursting with real, tangible ways of looking at and living a better life. Beautiful. Wonderful writing." (Kevin Kling, storyteller, NRP humorist, and best-selling author)
"I love this book. It's a wonderful story about friendship, the twists and turns of life, and finding treasure. Some reader will win $50,000. Amazing!" (John Gray, New York Times best-selling author of Men Are from Mars, Women Are from Venus)
"A clear, engagingly comic novel with a hero's journey that is part Gonzo road trip and part spiritual voyage. Pete Bissonette exploits his flair for wildly funny observation to tell a tender story of seeking and finding." (Barnet Bain, director of Milton's Secret, producer of What Dreams May Come, and author of The Book of Doing and Being: Rediscovering Creativity in Life, Love and Work)

All good works and deeds are rewarded through persistence, patience, love, kindness, harmony and wellbeing.