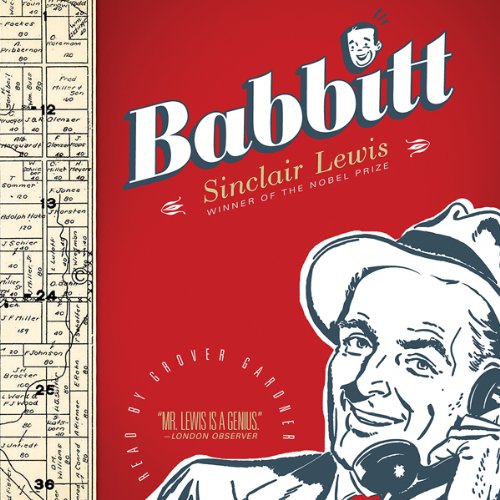 On the surface, everything is all right with Babbitt’s world of the solid, successful businessman. But in reality, George F. Babbitt is a lonely, middle-aged man. He doesn’t understand his family, has an unsuccessful attempt at an affair, and is almost financially ruined when he dares to voice sympathy for some striking workers. Babbitt finds that his only safety lies deep in the fold of those who play it safe. He is a man who has added a new word to our language: a “Babbitt,” meaning someone who conforms unthinkingly, a sheep.

This book was written and set in the early 1920s but it could have been written yesterday. It is an unflinching and penetrating look at a middle American town and a middle American man, Babbitt. Over the course of the book Babbitt slowly comes to the realization that something is lacking in his life. He doesn't know quite what it is. He is, by the standards of society, successful, mostly honest and upstanding, and yet he feels something is missing. After searching in the common places for meaning and excitement, he realizes that the answers are close at hand, and through his family, particularly his son and daughter, he comes to realize some of what he has been overlooking.

Babbitt could be a poster boy for living an unexamined life, a life lived by the lights cast by society at large as opposed to those emanating from within.

A lovely book well read by Grover Gardner. I was apprehensive about Gardner's narration because the only other book that I have listened to him narrate is The Rise and Fall of the Third Reich and this novel seemed such a radical departure. I was very pleasantly surprised. His narration was pitch perfect.

For a lot of the time I read this, I found myself thinking of Jonathan Franzen. Is it possible he is the 21st century’s answer to Lewis?

That’s not an insult, even if we have mostly forgotten Lewis and what he meant to American literature. He was, after all, the first U.S. author to win a Nobel Prize in literature, and he created a vocabulary for talking about American culture that lasted until I was a kid in the 1970s. People were still describing someone as an “Elmer Gantry” and, yes, as a “Babbitt.” Each was effective shorthand for describing someone warped by the excesses of American culture, someone who, unknowingly infected by the sorts of desires Theodore Dreiser most famously drew, sets out to infect others with the same ones.

If Franzen isn’t drawing characters as memorable in their essentials as Gantry or Babbitt, he is showing people who are similarly complicit in the same system that plagues them. If Lewis’s characters got casually drunk in the middle of Prohibition, Franzen’s get casually stoned today. If Lewis’s were bewildered by what the dawn of the automobile and telephone age meant for the way we live in it, Franzen’s do the same for the effects of the internet and the 24-hour news cycle.

All of that seems relevant because I can’t quite decide how highly I regard Franzen. At the worst he is just what Lewis was: arguably the foremost chronicler of American dissatisfaction of his age. And yet, that said, Lewis was far from a hack. He made Naturalism relevant at the dawn of the Modern moment. We forget how impressive he was because his work comes out just a few years before Hemingway, Fitzgerald, and Faulkner rewrite the boundaries of what’s possible in the novel.

There are some impressive technical moves here. For one thing, there really is no plot. It’s episodic, showing us a succession of portraits of George Babbitt, a man with pretensions to individuality who finds he can’t function unless he’s reassured that he’s doing just what everyone else is doing. That’s experimental; it’s pushing the limits of what we think fiction is.

For another, there’s a capacity for mockery that lingers almost 90 years later. To the degree we remember Lewis today, we have him cast as middlebrow, as someone people read if they couldn’t quite handle the cutting edge of Gertrude Stein or Virginia Woolf. That may be true, but there’s also a Modernist bias: we tend to admire novels that excavate the self over those that plumb the nature of the overall city. I share that bias; I like novels rooted in character, especially if the exploration of character takes place from odd angles.

I’ll criticize Babbitt and Elmer Gantry because, in the end, Lewis has no affection for his characters; he holds himself above them, thinks of the “real writer” as exempt from what he sees. And that’s what brings me back to Franzen. There are some today who rank him alongside Foster Wallace and Lethem, just as there were some who saw Lewis as the equal of Dos Passos or Fitzgerald.

So, bottom line, Lewis still has some relevance today for his method and his real if not-so-subtle insight, but he’s also interesting for what he suggests about the literary politics of then and now. Yeah, this drags in spots (but The Corrections doesn’t?). Still, it’s worth a look on its own terms and for its echoes today.

Sinclair Lewis’s “Babbitt” is categorized as a satire, a parody of life during the roaring twenties, but its story seems no exaggeration of a life in the 20th or 21st century. Published in 1922, it is considered a classic. It is said to have influenced Lewis’s award of the Nobel Prize for literature in 1930. (Lewis is the first American to receive the Nobel Prize in Literature.) Lewis is highly praised for describing American culture. “Babbitt” is the eighth of thirteen novels Lewis published by 1930. Lewis creates a body of work that intimately exposes strengths and weaknesses of American democracy and capitalism.

Lewis writes in the midst of a burgeoning American industrial revolution. It seems what happened in the 1920s is similar to what is happening today. The industrial revolution is now the technology revolution; women are still undervalued, many Americans want a business President elected, and unions are being busted. Today’s young men and women are still breaking social conventions. The stage seems set. One hopes 2015 is not America’s new roaring twenties; pending another economic crash.

I guess the most surprising thing about this book, written in 1922, is how little things have changed. I thought we , in the early 21st century, would be light years ahead of that backwards time. But no. There is just as much cronyism, just as wide a political divide, with your party preference having just as much an effect on your quality of life now as was extant then.

As for the narrator: if I ever write a book that Audible wants to record, I'd hope Grover Gardner is the guy reading it. He's wonderful.

It's amazing how times don't change. This book is a great time capsule. To see what things were like during prohibition for the middle class is very interesting. And to see how a middle class person goes through the same cycle generation after generation (with adjustment made for technology) is pretty amazing too. I found myself depressed and trapped in the cycle by the end of the book. It was a good perspective on the life of middle class man. I would only recommend this book to those interested in culture of the time or culture of middle class man in general (not a large number of people in that group).

great narration and the dialogue is perfect.

the narrator was second to none and the character of Babbitt captures the real inner struggle of the modern man and the pressures of conformity.

When was this written???

What a wonderful read! Despite being written almost a century ago, Sinclair has captured the essence of the American human condition, with humor and clever writing, that holds up so very well in the 21st century!
You will enjoy spending time w/ good ole George and might recognize a bunch of folks you already know!

The greatest satire of the 1920s - such a brilliant diagnosis of American capitalism. Grover Gardner's reading is also wonderful.

Grover's rendition of Sinclair Lewis' classic is bang on. He makes George Babbitt relatable and human.

Sadly, could be written today