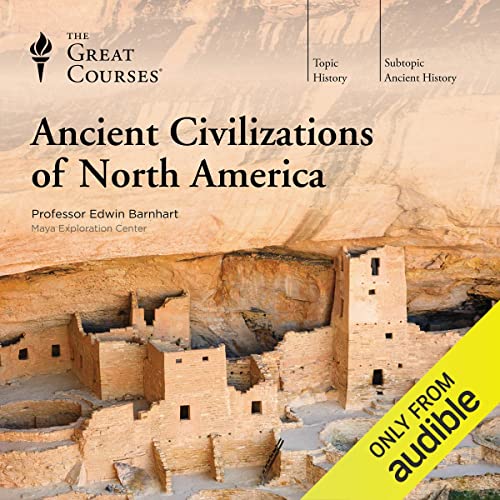 For the past few hundred years, most of what we’ve been taught about the native cultures of North America came from reports authored by the conquerors and colonizers who destroyed them. Now - with the technological advances of modern archaeology and a new perspective on world history - we are finally able to piece together their compelling true stories. In Ancient Civilizations of North America, Professor Edwin Barnhart, Director of the Maya Exploration Center, will open your eyes to a fascinating world you never knew existed - even though you’ve been living right next to it, or even on top of it, for as long as you’ve been on the continent.

The peoples of ancient North America were exceptionally knowledgeable about their environment, but their intellectual and artistic curiosity went much beyond the immediate need for food and safety. Beginning thousands of years ago, and without benefit of written language, native peoples became mathematicians, construction and soil engineers, astronomers, urban planners, and more. They developed thriving cities, extensive trade routes, canals to bring water to the desert, and earthworks we still marvel over today.

In 24 exciting lectures, you’ll learn about the vibrant cities of Poverty Point, the first city in North America, built about 3,500 years ago, and Cahokia, the largest city of ancient North America. You’ll explore the many ways in which the Chacoan environment provided cultural and religious focus for peoples of the southwest. And you’ll learn about the Iroquoian source of some of our most basic “American” values.

A different perspective - civilizations not tribes

The perspective of thinking of the civilizations and nations rather “tribes” of North America is what prompted me to listen to this course. I have been to many of the locations mentioned in the course, particularly in the Southwest, and had managed a small contract archelogy/environmental company for a bit. So, considered myself somewhat conversant. vis a vie educated, in native or first people cultures. I now realize I missed so much on my brief project reviews and visits to some wonderful National Monuments and other historic sites.

This course has provided me with a bit of education and a very different perspective. Barnhart presents history from the arrival of the first peoples across the Bering land bridge to first European contact. The course proceeds through cultural history in a logical manner of regions of North America. Where I saw ruins and interesting mounds, I now see the rise and fall of civilizations just like those of western and eastern world history. He presented broad interconnected picture of pre-contact life in North America.

I see first contact as another period of change and upheaval no more brutal than Alexander’s conquest of Persia, the Saxon conquest of England and so many other conquests from China to Egypt. I’m sure some reading this may disagree; that just fine with me. Perhaps, as I enter my eighth decade of my cycle of life, I see a different perspective. The culture and nation we live in will end at some time just as it did for those who were here long before us. My lens is not so much one of good and bad as it is a lens of that is how things are. This course reinforced that worldview.

The course also made places I have visited like Chaco Canyon come alive. The mystery of roads, equivalent to Roman roads, that lead to nowhere we can understand is fascinating. The accurate astronomical alignments throughout the Chaco region are impressive. particularly since the Chaco nation had no writing language we know of to record decades or even centuries of observations. I want to revisit Chaco Canyon, the Aztec Ruins, and other places.

In summary, the course was interesting, informative, transformative and well worth time to listen to. Barnhart states that was part of his goal in designing the course. Well done, sir.

Left me wanting more in the best possible way.

There are only a couple audiobooks on Audible on the topic of Native American history. Most of those seem to explicitly dwell on the poor treatment of natives in the post-contact world. But I already knew that contact was not just hugs and puppies for the natives after Columbus; what I wanted to know was: who was here before us, and what did they do? This audiobook more than delivers. I just wish it was longer, but I left these lectures with the distinct impression that the archaeology just isn't there yet, due to e.g. modern cities existing on top of the most interesting sites. Still, the first thing I did after finishing these lectures was make a list of friends who live near some of these sites, and start planning some visits. Tl;dr excellent set of lectures, recommend it to anyone with an interest in ancient North America.

The author cares less about teaching ancient history than he does about choosing just the right hair-splitting word to describe people and cultures. His overly self conscious worrying about offending anyone makes this book intellectually inert and boring. This is yet another example of tepid scholarship so afraid of stepping outside the boundary of an ever constricting radius of intellectual freedom.
The author displays a dystopian self censorship that makes the material vacant and sterile.

This was much more of an overview of archeological methods and a listing of historical sites than a review of the civilizations. This course reviews the methods of discovery and doesn’t piece together what the discoveries tell us.

Where Was This Guy When I Was In College?

Great lectures! Dr. Barnhart provides pertinent information, lots of meaningful details, and he keeps it interesting 100% of the time! At the end of the course, he invites the reader to visit the places he's discussed, and that's exactly what the course makes me want to do.

When a topic has not been completely proven, and remains theoretical, Dr. Barnhart presents all the known potential explanations, along with sensible reasons for each, and encourages the listener to think and draw their own conclusions.

His knowledge and experience are strongly apparent, yet he comes across more like you were sitting on the patio drinking beer with him and listening to him talk, than as if he were in an auditorium delivering a lecture. I wish I'd had professors like him 30 years ago in college!

I will listen to this book/course again!

I just located all of Dr. Barnhart's courses that I could find in Audible, and added them to my wish list!

Another liberal diatribe from another self-hating academic. Too bad-I was looking forward to learning history instead of hearing yet more putrid leftist politics. Don’t bother with this book unless you feel the need to feel guilty for being of European heritage. I almost feel sorry for him. Almost. Definitely for his students.

This was absolutely outstanding. I loved this course, I wish there was more to listen to I hope they develop a number of other courses focusing on other tribes and even natives of Canada, and the Caribbean. Or state by state. This was wonderful. Get it already.

This guy is amazing

this is the third one of his that I finished, it was great. His courses on Central and South America were all so wonderful. Highly recommended!

Author ruined it by being PC

The Great Courses claims to be for the "Average Man", yet Edwin Barbhart starts off complaining about how history is divided by BC and AD, then drags out a PC version he's going to use for explaining the dates the events occurred. Maybe this works with a written book, where you are able to refer back to his method, but when the book is read to you, his method is a dismissal failure. Spent most of the time wondering where in the historical timeline he was talking about.

lecture 23: "They captured a teenage girl from a neighbouring village, tied her naked to post, and shot her with arrows... but they certainly weren't a group of bloodthirsty savages!"
really? REALLY?!
I'm so tired of the portrayal of MY ancestors as bloodthirsty savages while gross barbarities such as cannibalism and human sacrifice are elided over with so much ease. Either judge both sides on equal terms or don't judge them at all.

Absolutely amazing, a great introduction to ancient North America that I will be visiting again

I really enjoyed this course and learnt a lot about pre-contact Americans. The lecturer is clear, engaging, and clearly cares deeply about the topic. I come away with a much deeper picture of Native American civilizations and a desire to go visit places like Poverty Point and Chaco Canyon to make physical the pictures painted by this course. Recommended.